Approximately 2000 people visit Hosier Lane every weekend, even on a cold, rainy Sunday in May. On this particular cold, rainy Sunday there were more than the usual number of people in Hosier Lane. People had to squeeze through the crowd that had gathered to rally in protest at a proposed multi-story hotel development in the aerosol paint covered lane. 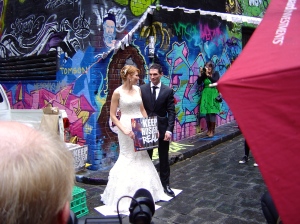 If you think that the lesson of the story about the goose that laid the golden egg couldn’t be more obvious, then you are seriously under-estimate the capacity of humans to be both greedy and stupid. The current proposed redevelopment of the old MTC/Chinese theatre site on Russell Street, that backs onto Hosier Lane into a multi-story hotel is not just an inappropriate development, it is a greedy and stupid.

Inner city Melbourne’s rejuvenation, the result of decades of planning, creating an event and spectacle based city brings people into the city. This in turn created a market for restaurants, shops and hotels – hotels, that would include the proposed multi story development.

Now a reasonable person would think that it would be in the interest of a development next to one of Melbourne’s major tourist attractions to be designed appropriately for its location but this would, again, under-estimate the capacity of humans to be both stupid and greedy.

I am not against development; I am not like Jeff Sparrow in Radical Melbourne moaning that the Melbourne’s Communist Party Headquarters, at 3 Hosier Lane from 1936 to 1939, is now occupied by a restaurant. What is needed is development that is appropriate to the location, that doesn’t simply occupy the space, that doesn’t simply take things away from the place without giving something back to the area.

Professor Roz Hansen, chairperson of the Ministerial Advisory Committee for the Melbourne Metropolitan Strategy points that the development doesn’t just threaten the tourist value the street art and graffiti in Hosier Lane it also threatens to overshadow the ‘Winter Garden’ in Federation Square.

This new development will also impact on the Babylonian-revival style Forum Theatre – the proposal admits it has no plans regarding the known vibrations from this live music venue. No doubt after it is constructed they will make a complaint and attempt to shut down the venue?

This is not to forget that Hosier Lane is distinctly different to the designed attraction of Federation Square or even the heritage listing of the Forum Theatre. The development also threatens services to the homeless that are provided by the Livingroom and Youth Projects in Hosier Lane. As well as, the pedestrian zone that the lane way has become.

Describing these developers as “the real vandals” as Adam Bandt, Federal Member for Melbourne, did at the rally today is being too poetic and too kind. Perhaps I am being too kind in simply describing them as stupid and greedy.

There is an online petition and it is interesting to see that people are signing it from Brazil, Croatia, India, Italy and the USA, indicating that this is not simply a local issue.

Writer, independent researcher and artist, Mark Holsworth is the author of the book Sculptures of Melbourne. END_OF_DOCUMENT_TOKEN_TO_BE_REPLACED
This entry was posted on Sunday, May 4th, 2014 at 8:48 PM and tagged with Adam Bandt, development, Federation Square, Forum Theatre, Hosier Lane, Jeff Sparrow, Melbourne, Roz Hansen and posted in Architecture, Street Art. You can follow any responses to this entry through the RSS 2.0 feed.
« Inge King – Retrospective @ NGV
Against Naive Idealism »

One response to “Keep Hosier Real”