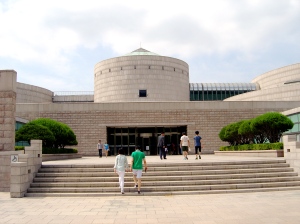 The idea of nations and geography makes the artist is built into the very structure of most major art galleries, after all they are often called ‘National’ or ‘State’ galleries. The artificial divisions these gallery make between nationalities and even races perpetrates the idea that the nationality or race is important. (The NGV has a separate gallery of artists who identify as aboriginal.) This nationalism is reflected in the hanging of the art although it does not help our understanding of art history nor the appreciation of the art anymore than hanging the art on the basis of the artist’s gender. The underlying assumption is that there is an underlying core aesthetic to a particular nationality or race is absurdly racist and is not supported by any evidence.

John Burrow writes “For Hegel, in the last part of his Philosophy of Right (1852) (324, 325), it was crucial that the State, in war, could call on the citizen to sacrifice his life. War was no longer, as in the eighteenth century, an affair merely for mercenaries. The State’s right to individual’s life was not just an instrument for his protection (the contract theory), or for the production of welfare (Enlightened Despotism), but a higher spiritual entity than the individual. The requirement of his life was not tyranny but self-sacrifice, submission to one’s own higher will and participation in the life of a higher entity.” (John Burrow, A History of Histories, Penguin Books, 2007, p.459)

The claim that the state has a right not to be divided and that protecting that state, in the words of Radovan Karadzic before the UN tribunal in the Hague, “holy and just.” (The Independent 20/3/10)  The assumption that a nation state has a right to exist implies that it is a higher entity. This higher entity, the god of the nation, has a unique history, a unique culture, if not a unique language and national identity, is legislated, paid for and demanded by the nation state. Where there is no evidence of this unique culture it must be invented, developed and manufactured. It is assumed that there is such a thing as Australian art but nobody assumes that there will be Australian philosophy (philosophy in Australia is predominately Anglo-American philosophy with a little bit of continental European philosophy).

National galleries are must have items for countries as if they were playing some giant game of Sid Meier’s Civilization but what are the benefits of having a national gallery, like the NGV: “the richest treasury of visual arts in the southern hemisphere”? (The National Gallery of Victoria is a wonderful example because it is now a “national gallery” without a nation since the independent colony of Victoria federated with other Australian states.)

Is the nation state to coil up like old Smaug around its treasure, exuding power and basking in the envy of others? To have a national collection that to use in soft diplomacy to representing the state? As an educational tool to train future artist and designers to better the nation’s productivity? As infotainment, a tourist attraction to bring customers to the city’s restaurants and hotels and improve the tax revenue? Or is it to be sold off when the city goes bankrupt as was suggested for the Detroit Art Gallery?