The Commons is a Brunswick residential complex design by Breathe Architecture’s Jeremy McLeod that received the 2014 Victorian Architecture Award for Sustainable Architecture as the year’s ‘‘exemplar of apartment living.’’ Read more about the architecture award in The Age but I want to examine the way that it integrates with the locale in particular the graffiti in the area. 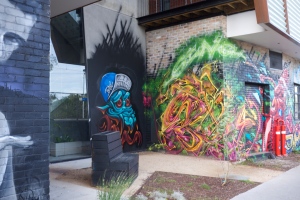 It is not an inspiring locale, at the end of a dead end street on a block between train tracks and a panel beaters. It was previously the site of a single story factory/warehouse stood surrounded by a chain link fence. In its favour it is close to Sydney Road and very close to Anstey Station train station. Anstey has the standard utilitarian construction of a Melbourne railway station from the 1970s, the chain link fence, only the signage has been updated.

I have watched the developments progress as I passed by on my regular ride along the Upfield bike path or when traveling by train in and out of the city.

Now plants are growing up the chain balcony rails, of this multi-story building with an attractive facade facing the railway. On the ground floor there is the coffee shop, Steam Junkies and two large rainwater tanks sit out the back. It contributes and improves its locale rather than exploit it. The Commons is the only building with an entrance to the Upfield bicycle path.

There plenty of graffiti along the bicycle path but the brick walls beneath the second decorative story facade of The Commons had only been tagged a couple of time since its construction. The tags were not removed. It was unlikely that the walls were going to stay that way as they were along the graffiti covered Upfield bike path and it appears that it was never the intention.

Then this week came the Sinch tribute, a massive legal piece that covered The Commons lower walls and water tanks. An awesome group effort featuring parts of the AWOL and Id crews along a few others. See Land of Sunshine for more photos. There aren’t that many graffiti tributes in Melbourne (see my post Rest In Peace).  Sinch (1988 – 2014) died in June; Benjamin Millar “Tributes for street artist electrocuted while train surfing” in The Age. 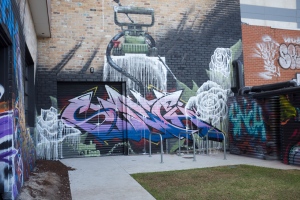