Noula Diamantopoulos is performing Quest at the Melbourne Art Fair and I had an interview with her on Wednesday morning. Quest consists of Noula sitting on a pile of cushion on a carpet in a quiet space with mirrors. There is a low table with coloured pens and another pile of cushions for the visitor. The visitor writes a question on paper that has already been painted by Noula and the quest begins. In silence the visitor asks five questions and gets five written responses back. “The silence is intimidating” Noula told me, “The writing makes it concrete.” 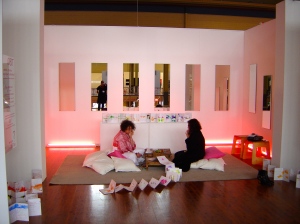 You would think that a punk philosopher, like myself interviewing what appears to be a new-ager is bad idea but keep in mind that art is not what it appears to be. Often with good art some people forget that it is art. Quest might look like a meeting with a spiritual guru, but it is not. Some people ask Noula questions as if she were a fortune teller: ‘will I fall in love?’

Noula Diamantopoulos is a performance artist and performance art it is closer to sculpture than spirituality. “I sculpt” Noula said, paused and then explained that her work is like moulding clay only it is a collaborative participation on a conceptual work of art, sculpting both the physical and the conceptual.

In preparation for my interview I looked at several of her websites; Noula told me that she doesn’t have a main website but that she finds them a way to organise her ideas. Noula studied at Sydney sculptor Tom Bass’ school in 1998. She remembers Bass dressed immaculately in white (Noula is also dressed all in white except for a pink scarf) and that his studio smelling of mud. He was very strict in teaching sculpture and wrote poetry. People in Melbourne would know Tom Bass’s sculpture from his Genie in Queen Victoria Gardens or the Children’s Tree on Elizabeth Street.

On one of her many websites Noula had written: “Art making is a transformative process.” People expect transformation from the spiritual but art really is a transformation, something changes into art. In making art you have to have the intention to change something and that requires awareness of what you are intending to change and what you changing. Noula told me that generally by the third question that people ask her things have changed. “Questions have the seeds of all answers.”

In the rush of the Melbourne Art Fair performance art involving a quiet space for reflection is a rare opportunity.

Writer, independent researcher and artist, Mark Holsworth is the author of the book Sculptures of Melbourne. END_OF_DOCUMENT_TOKEN_TO_BE_REPLACED
This entry was posted on Saturday, August 16th, 2014 at 12:53 PM and tagged with Melbourne, Melbourne Art Fair, Noula Diamantopoulos, performance art, Tom Bass and posted in Art Galleries & Exhibitions. You can follow any responses to this entry through the RSS 2.0 feed.
« Melbourne Art Fair 2014
Paul Yore Trial Day One »