Sublime to the Spooky

I saw a few exhibitions this week that ranged from the sublime to the spooky in some unusual locations and some of the usual locations. 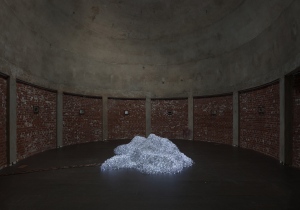 Lucas Maddock’s New Hypothetical Continents is at Dome Gallery. Dome Gallery is at The Mission to Seafarers, one of the few old buildings in Docklands. Under the great domed space, the lights of Maddock’s new continent twinkle in the circular space. The continent’s scale matches the space and creates a beautiful spectacle in a location that resonates with sea transport. Maddock’s work references the modern fascination to discover or create a modern Atlantis. Maddock came public attention when he and Isaac Greener were part of the Melbourne Sculpture Prize in 2011 and his Apostle No.2 stood in Federation Square.

Like many people I went to see The Vivisector to see Andrew Delaney has sewn soft tissue sculptures; it was clearly a very popular little exhibition. It reminded me of soft versions of Damien Hirst, The Virgin Mother, 2005 as well as, what I know of the history of anatomical models. All the fabric hearts, arms and other body parts were very good and impressive but not brilliant. The work has a visual sensationalism with an instant appeal, of transferring anatomical models to fabric but after that what is left. It was a bit too slick, showing evidence of Delaney’s decade of work at Myer, as a visual merchandiser and stylist. It has a strange corny macabre aesthetic; the kind that does attractively present a fabric model of a foetus nestled in a broken down arm chair. I thought that the work looked better when I saw some of the work amidst all the clutter at his studio, Anno Domini Home at the back of Harold and Maude than in Edmund Pearce Gallery also on Level Two of the Nicholas Building.

Hidden Faces of the Archibald Exhibition, also known as ‘the Melbourne Salon de Refuses’, the best of the Victorian rejects from the Archibald Prize in the lobby of the Hilton Hotel. With the Archibald there are so many entries that these little side exhibitions have been going for decades, each with their own people’s choice prize. Looking at most of the portraits you can instantly see why they didn’t get into the Archibald: tired old techniques, awkward poses, really odd ideas (like, why is Ted Baillieu’s head on a tree?) or too obscure a subject for the Archibald’s idea of a notable Australian.

At Screen Space Patricia Piccinini Swell, 2000 made me feel slightly unbalanced watching the three screens of animated waves but I was more impressed with Leela Schauble’s Synthetic Species Motion Study No.7 because it was creepy and relevant to plastics in the ocean. However my preference for Schauble’s work may be influenced by the development of digital animation in the last 14 years.