Walking between the art galleries on Flinders Lane and thinking about the uncanny nature of a thing that looks like another thing but is made out of completely different material. This uncanny illusion is a trick that many artists use, along with lots of other people from cake decorators to topiary gardeners. Illusions are only one trick and a good artist will use more than one trick. (Who wants a one trick pony?) Two exhibitions had spurred these thoughts.

Carly Fischer’s five installations, Magic Dirt in Gallery 1 of Craft Victoria look like arrangements of rubbish. But are all made from paper and foam core, even the plastic bags and barbed wire. The illusion is even more uncanny because paper is such a familiar material. However, the magic of the illusion is only part of the magic of this installation. Fischer reflects on Australia as an enormous rubbish dump; the outback is littered with empty cans, hubcaps and empty bags. The irony of the reuse and recycle labels on this packaging. Fischer reflects on the way that we arrange our detritus and the primitive magical thinking behind the piercing a KFC pack with sticks or the bullet holes in the kangaroo sign. 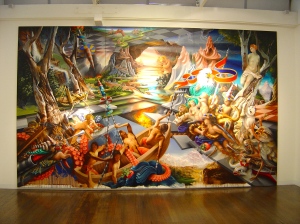 Peter Daverington’s exhibition Because Painting at Arc One is about illusions in paint. Daverington reflects on the tradition of these artistic illusion with references to illusionistic art in Western painting from the Bosch through to op-art. Geometric exploding planes combine with the baroque over the top drama of the illusions. Daverington is also interested in where the illusion breaks down on the edge of the canvas, where it becomes drips, scraped back or great spreads of solidified paint.

Because Painting is a home coming exhibition for Daverington who is Melbourne-born but now based in New York.