At the bottom of a box of old books, mostly about Africa that my parents brought over to my house I found Denton Prout and Fred Feely, 50 Years Hard, the story of Pentridge Gaol from 1850 to 1900 (Rigby Limited,1967, Adelaide).

It was an enjoyable read although not entirely focused on Pentridge Prison, there is a lot of other details about the Melbourne colony. Sometimes the book lost focus but I wasn’t bored, there is a dramatic short story about a night ride from Geelong to Melbourne that was indirectly connected to Pentridge. Towards the end there is a bit of an examination of nineteenth century penal theory and practice but the book is more about historical story telling than any overall thesis.

There were also a few more anecdotal details about William Stanford, the convict who carved the granite fountain in Gordon Reserve (above Parliament Station) including speculations on who was the model for the boy. However, amongst all these details the authors fail to mention, the crucial detail that Stanford had been an apprentice stonemason before immigrating to Australia. 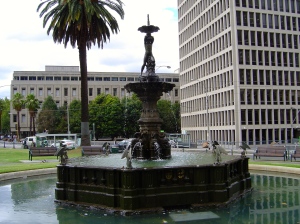 “Stanford was allowed the use of a shed for his work. The magistrate also supplied him with a kit of tools, and when the artist wanted a model for the eagles which were to ornament the rim of the fountain , he arranged for a stuffed eagle hawk to be sent to Pentridge from Bendigo. Mr Paton also came to Stanford’s aid when he wanted a child to act as model for the nude figure forming the finial of the work – a youth holding up a basket of flowers. Stanford, it is said, made many request to the warders to allow one of their children to pose for the nude, although the warders were willing their womenfolk had other views.” (p.139-40)

The vast site of the old Pentridge prison continues to be rehabilitated and redeveloped into a housing estate. However, apart from the residential development and a few eateries there is little going on in the area. I notice that people keep on searching for ghosts in the grounds of Pentridge prison but it appears rather soulless in the daylight. The old carved granite bluestones retain character but the development appears lifeless. Stone work was a major feature of Pentridge’s prison regime in the early years of the prison, some of it perhaps carved with William Stanford himself. 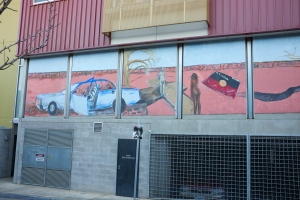 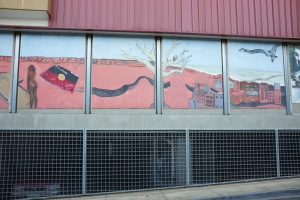 Walking around Pentridge Village, as it is now called, I thought that I had finally found the preserved mural by the aboriginal artist, Elliot Ronald Bull (1942-1979) that I heard about. Like Stanford, Bull already had already studied painting before being sent to prison. In 1960 (or 1962 or 1964) Elliot Bull painted the mural with ordinary house paint in “F” Division. (See my post on Prison Art @ Pentridge.) Although Bull’s mural at Pentridge is his most important surviving artwork (S. Kleinert, ‘‘‘Blood from a Stone”: Ronald Bull’s Mural in Pentridge Prison’, Australian Journal of Art, 14, no 2, 1999, p 93).

I was wrong Bull is not the artist responsible for this painting. The unnamed artist  in a yet unnamed lane, between Pentridge Blvd and Sentry Lane. Now I think that it might have come from the Jika Jika Division exercise yard, as it has steel reinforcing bars embedded in the concrete. There was nothing about its history and it probably adds less to the lane than it did to the prison yard. 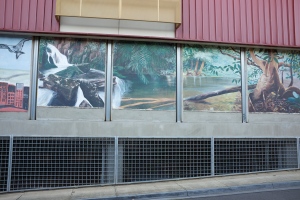 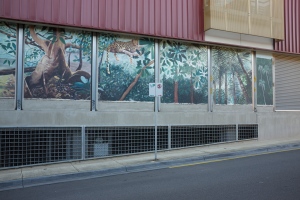