I was disappointed when Voller’s giant colour paste-ups on the public toilets came down but then MoreArts is only a temporary urban art exhibition. Voller’s paste-up on the industrial rubbish bin at the station carpark, although slightly damaged, is still clearly visible and creating a wonderful illusion. Now there is a new image of another house by Voller on the public toilets, appropriately for Melbourne’s summer, it has a stripped awning. 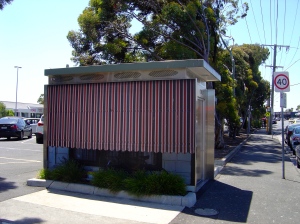 James Voller is a photographer from New Zealand who is now based in Melbourne furthering his studies. His urban interventions with paste-ups the cover the whole surface make powerful works of art.

In 2011 I saw James Voller’s exhibition “Constructing Site” at Beam Contemporary. Voller’s photographs his urban interventions that used architectural paste-ups the play with the size and meaning of urban objects. I didn’t get around to writing the exhibition at the time, it was just some interesting photographs and I’d seen big paste-ups before.

Now that I’ve seen Voller’s work on site regularly in Coburg, very regularly, just about any time I go anywhere, as I pass by the public toilets opposite the mall or see the bin on the way to the train station, I think they are fantastic. 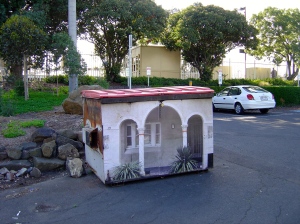 What I find fantastic about Voller’s urban installations is that suburbia is often used as a metaphor for dull and unattractive and Voller is one of the few artists who can make impressive art about the subject. Public toilets are rarely seen as the site for art, although see my post on the Russell Street Sculptures, but we all need public toilets and rubbish bins.

Voller’s two installations improve this with flare. They have done so much to improve the ugly heart of Coburg, the massive stretch of tarmac supermarket parking lots around the railway station on the second block west of Sydney Road. 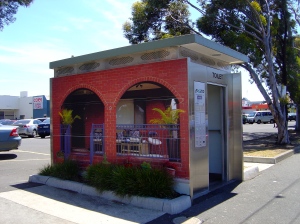