Monday 1 June, a very cold morning, the start of winter in Melbourne and art consultant, Bernadette Alibrando is giving a tour of Melbourne Central’s art for the media. Some people are surprised that Melbourne Central, a shopping centre above a train station, even has a public art collection. Another surprise is the number of street artists commissioned by the shopping centre. 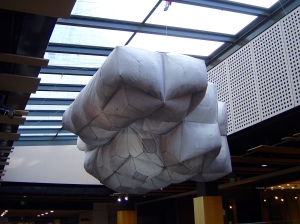 The tour did not look at the novelty clock (for that see my post on Melbourne’s giant novelty clocks) or the way that the old shot tower is incorporated into the glass cone architecture the central features of the centre’s main space. We started with the floating Hamish Munro sculpture, Filling the Mould that was slowly deflating after the morning rush hour. The fabric sculpture over a stair well expands and contracts relative to the number of people in the shopping centre. The grey fabric of the sculpture matches the raw concrete architecture of Melbourne’s Central’s interior.

There is the huge (61m. long x 3.5m height) heritage listed mural in the Swanston Walk entrance way to the train platforms that dates back to the completion of the station in 1984. The mural is by Dr Hogg was made in collaborated with Ilma Jasper and Kay Douglas and celebrates workers in a variety of trades and industries. Dr Hogg is the Coordinator of Public Art/Art in Public Space in the School of Art and has been working with public art and murals for most of his career. 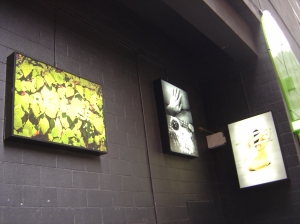 Part of RMIT lightscape project at Melbourne Central from earlier in the year.

The proximity of RMIT to Melbourne Central brings in RMIT lightscape project with a regular rotation of works by six students. In the food court there is a painted piano, inviting and encouraging buskers to ask permission from the shopping centre administration.

The commissioned works in the controlled environment of shopping centres by street artists known for their uncommissioned/illegal art is either a complete sell out or the obvious triumph of their style of guerrilla urban decorations. There are also works by street artists at the QV Centre and read my post about the street artists at Barkly Square in Brunswick. I am reliably informed that there is also pieces by Adnate-Sofles-Smug in Northland and Lister in Broadway Shopping Centre. That shopping centres consider street art to be the best style to present to their customers stands in contrast to the frequently seen small business owner doing vox pop complaints to the media about graffiti.

It feels odd to be writing about the arts policies of shopping centres but Melbourne Central has a similar arts strategy/policy to Barkely Square with using both recognisable and popular street artists along with buskers to add local colour and atmosphere to a shopping centre’s architecture.

Writer, independent researcher and artist, Mark Holsworth is the author of the book Sculptures of Melbourne. END_OF_DOCUMENT_TOKEN_TO_BE_REPLACED
This entry was posted on Wednesday, June 3rd, 2015 at 11:41 PM and tagged with Bernadette Alibrando, Dr Geoff Hogg, Kaffeine, Lucy Lucy, Melbourne, Melbourne Central, RMIT, Slicer and posted in Public Sculpture, Street Art. You can follow any responses to this entry through the RSS 2.0 feed.
« Memories of David Bowie
Alan Bond and art: a posthumous review »

2 responses to “Melbourne Central has Art”