After winning the America’s Cup in 1983 Alan Bond toured the piece of silverware around the country where it was displayed in state and national galleries. Sitting in the middle of a gallery the Art Gallery of NSW in a glass case it was an ugly display of a public institution bowing to corporate power.

Also in 1983 Bond’s family company, Dallhold Investment Ltd. paid US $3.96 million for Edouard Manet’s Le Promenade at Christie’s New York. The painting was previously owned by the American financier, Paul Mellon. This purchase received little attention at the time but later the purchase would became a significant fact in Bond’s trial. 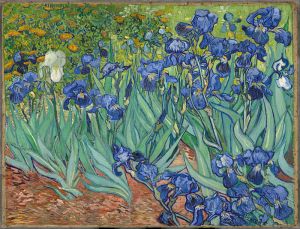 In 1987 Alan Bond got a lot more attention when he purchased Van Gogh’s Irises. The painting was previously owned by John Whitney Payson who had inherited from his mother, Joan Whitney Payson, a business woman and avid collector of Impressionists and Post Impressionists.

Bond had paid a record amount for the painting, US $53.9 million, making it still one of the most expensive paintings ever sold, but most of the money was a loan from Sotheby’s. The timing of the purchase was suspicious, just a few weeks after the Wall Street crash of Oct. 19, 1987 and it made headlines around the world. Had Bond and Sotherby’s Inc. colluded to create an artificially high benchmark for a painting and create confidence in the art market? It was enough for rival auction house Christies to make a complaint to the financial regulator about the deal. But who was manipulating who?

Alan Bond did not have control of Irises for long but he made the most of it parading it from the media. It was displayed in his Perth penthouse office for seven months. It then toured five Australian cities just like Bond’s prized America’s Cup. In his speech at the National Galley of Australia Alan Bond had the audacity to compared himself to Van Gogh as “free spirits ahead of their time”.

Sotheby’s then put Irises into storage in mid-September 1988. In 1989 in response to allegations in the British press that Sotheby’s was about to foreclose on the sale, Sotheby’s Financial Services Inc. claimed that Bond was meeting all of his repayments on Irises. In November that year, to help pay Alan Bond’s debt Sotheby’s auctioned Manet’s Le Promenade for US $17 million. There was just small problem, Alan Bond didn’t own the Manet as had been purchased by his family company, Dallhold Investment Ltd.

A few months later, in 1990 Sotheby’s sold Irises to the J Paul Getty Museum for an undisclosed sum and in 1992 Bond was declared bankrupt. In 1996 Bond was jailed for three years for fraud, part of this fraud involved the sale Manet’s Le Promenade.

However, these well known deals was not all of dodgy deals involving art that Alan Bond was involved in. When his business empire collapsed Bond arranged for 13 paintings and sculptures moved from Perth to London to avoid the liquidators as Colin James reports in the Adelaide Advertiser.

Alan Bond cannot be described as an art collector as he saw art as another market to play, high commodities to be traded. Art was something that he could by that would bring him many things that he lacked: attention, respectability and class. His corrupt and self-serving involvement in art and culture was of no significance except to the art market, who if Alan Bond hadn’t come along would have found another mug putter/dodgy businessman to help inflate the market price.