The construction has been going on for months but the small new park off Sydney Road has opened in time for the school holidays. There is still work going on, a bit more paving and a wall for Makatron, Itch and Otis to finish painting but lots of people are already using it. I enjoyed the temporary pop-up park in Wilson Avenue February and March 2014 and I was keen to see the finished park. From a simple intersection, a more complex area has been created and at the centre of the complexity is a physical puzzle, an urban bouldering form. 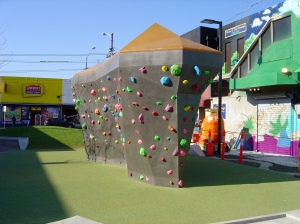 The plan for the small 700 square metre park won the Planning Institute of Australia (Victorian Division) Best Planning Ideas – Small Projects 2014 award. The initial public reaction has been just as enthusiastic. I spent almost an hour there just sitting in the sun, talking with people, watching how they used the space.

When I arrived a couple of little girls had found that the springy surface around the urban bouldering form was perfect for turning cartwheels. They were a bit too small to really climb the boulder but they had found their own use for the area. I talked to a skateboarder who hoped that they were not going to be put in skate stoppers as the moulded concrete seats and benches as they have excellent skating potential. Adding complexity to an area means that more people will different find uses for it.

Sam, a bouldering enthusiast explained the concept to me. “Bouldering is rock climbing for people, like me, who are scared of heights.” The short routes are close to the ground (under 3m.) so ropes are not required. The boulder terrain is suitable for novice to advanced climbers, with different trails of coloured holds. Sam told me that he normally climbs informal urban bouldering walls, like the one that used to be under the Burnley Bridge, and was unsure about “doing it in public”.

The Wilson Avenue urban boulder will be the first public art piece designed for bouldering. The boulder was designed Stuart Beekmeyer of Bouldergeist and fabricated by Big Fish.

Knowing that I was interested in micro-parks Stuart Beekmeyer started sending me emails and photographs from his Brunswick studio. Beekmeyer wrote, “I think people will be fascinated by the movement on the sculpture. It is a beautiful activity to watch.” And, after watching the people climb the sculpture today I agree with him. 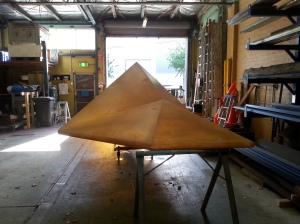 Looking at one of the photos of the top of the boulder with the sunlight shining through making it glow golden it was easy to see the connection between it’s angular planes and a well known Melbourne sculpture, Ron Robertson-Swann’s Vault. At the time I received the email with the photo I was looking at photographs of Emily Floyd’s Public Art Strategy on EastLink. At the park the drains and forms are yellow, as are the native flowers. (Are these more references to Vault? Denton Corker and Marshall would love it.)

Stuart Beekmeyer has more ideas for the urban bouldering installations. “I really like the idea if getting artists to sculpt climbing holds in the  future so its sculpture on sculpture.” What would be better if Beekmeyer got artists to choose the colours for the hand holds because the selection of candy colours looks like hundreds-and-thousands.

There is a small mound of grass, a few small trees and a lot of complex paving in the park, a mix of concrete, asphalt, cobbles, wooden decking and the spongy surface around the boulder. The sculptural aesthetics of the boulder, in its central position, surrounded by seating determines the look of the small urban park and the way that people move around it. The new park at Wilson Avenue appears to be very successful and fun.