Duckboard Place and its partner in the crescent, AC/DC Lane, are far less famous than the nearby Hosier Lane. Along with the usual aerosol art walls, stencil graffiti and guerilla installations, Duckboard Place has work by many notable paste-ups artists like Barek, Baby Guerrilla, Calm, Minou, Phoenix, Swoon and the enigmatic, Sunfigo. There is also this fine mosaic of beer bottle caps pasted up on a wall. 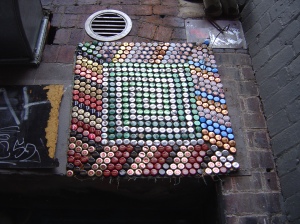 Duckboard Place was named after Duckboard House on the corner of the lane. It was built in the interwar period and served as a World War II entertainment venue for the troops, later a branch of the Melbourne RSL and now has a number of fine restaurants.

The Cherry Bar in AC/DC Lane now has its own lighting bolt wall of fame for all people and bands that helped them raise money for soundproofing; it was a particularly successful crowdsourcing campaign. The soundproofing was required by all the recent development of apartment building in the area, Melbourne is, according to the latest Bureau of Statistics, the fastest growing city in Australia adding an extra 95,600 inhabitants in the year to December. 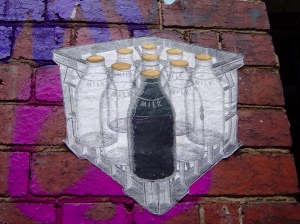 Whereas Phoenix’s paste-ups have a clear message and is well known in the street art community, I’ve been following his posts on Facebook about the construction of his milk crate, Sunfigo remains an enigma. I’d like to know more about Sunfigo, I guess that other people do too because of the number of searches for his name on my blog. I once received an email from Sunfigo but communications ended there. I hesitate to guess anything about Sunfigo and the email gave nothing away.

I should just look to Sunfigo’s art, the selection of images, the limited palette of colours, the use of various other media, and try to make some conclusions from that? The geometric outline illustrations in tape or plastic ribbon strung through a chain link fence are a novel way of drawing. Are those lions and other images Rastafarian references? Or is Sunfigo claiming to be the king with the lion, putting a lion sign up in Hosier Lane above the door way to the now defunct Until Never gallery? There is not much to go on, unlike Phoenix, there hasn’t been much of a message in the work. And it is odd that Sunfigo started big with his Little Diver tribute and various works in diverse media and has become more specialised with smaller works. I was beginning to wonder if it was worth writing about Sunfigo and all these little images until I saw Sunfigo’s parody film poster (not in Duckboard Place). 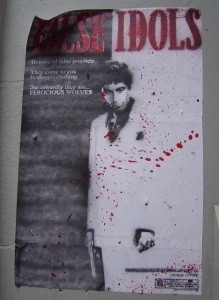