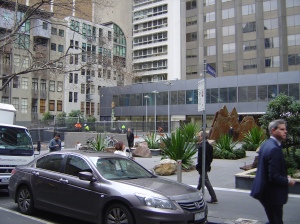 The forecourt on Lt. Collins Street

Ironically it was a dislodged slab of its marble facade in 2012  that spelt the end for the National Mutual building at 447 Collins Street designed by architects Godfrey, Spowers, Hughes, Mewton & Lobb in 1965. It’s façade of marble slabs was its one notable architectural feature, a move away from the curtain wall of earlier modernism. 447 Collins Street is now vacant and approved for demolition. In the forecourt of 447 Collins Street are the statues of John Batman by Stanley Hammond and John Pascoe Fawkner by Michael Mezaros, see my blog post.

What will happen to the sculptures? The Moral Rights provisions in the Copyright Act in 2000, under section 195AT, the owner of a moveable artistic work is liable to the artist if they destroy the artistic work without first giving the artist opportunity to remove it. The artist or their heirs, as two of the sculptors are now deceased, have the right to be informed about the removal, storage or subsequent reinstallation.

In the past Melbourne University was eager to provide new homes to sculptures dislodged from their original locations in the city, see my blog post. None of the sculptures at either 360 Collins Street or 447 Collins Street are site specific so it should not proved difficult to find a new home for them, if they are not returned to refurbished forecourts at their present locations.