The Victorian Craft Awards And why I didn’t vote in the People’s Choice. 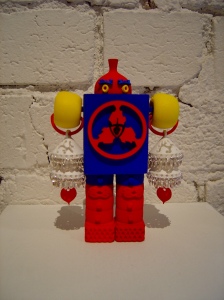 The Victorian Craft Awards is a huge exhibition with over a hundred entries and spread across four venues all accessible from Flinders Lane: Craft Victoria, 45 Downstairs, the foyer of 1 Spring Street and the foyer Sofitel on Collins.

One of Craft Victoria’s attendants asked us if we found the luxury surrounds of the lobby of the Sofitel on Collins Street intimidating. Actually it was very comfortable and the exhibits didn’t look out of place as exhibitions in hotel lobbies often appear. Karen Terrens beautiful, intricate quilt, Sanderson’s Apprentice, matched the luxury of the Sofitel’s lobby.

Along with the judges awards there were also a People’s Choice Award. I’m not sure about popular choice awards for a number of reasons. It is not that I dislike the popular opinion or don’t think that it should be recognised. I have questions about the kind of judgement made in an unsystematic manner. What is it to judge something a popular choice? Is it what I would choose for myself, for someone else, for the world.

Just because I like a work, get a laugh from it, does that mean that I want it to win the People’s Choice Award? Sun-Woong Bang’s Unexpected Linkage robot figure made of 3D printable polyamide, alcohol ink, acrylic paint and sterling silver is funny. Maybe that’s why it was the winner of the Jewellery Encouragement Award. Commenting on the ceramic work of Kenny Pittock’s All My Eggs in One Basket, Celeste tells me that he also has an amusing blog.

I suppose that I already have some biases as I’ve previously written about several of the entrants. In 2008 I reviewed Davern’s exhibitions at Craft Victoria and it was good to see her continuing this theme with three collaged broaches cut from biscuit tins in this exhibition. I mention seeing a Nicholas Bastin’s exhibition at Craft Victoria in a blog post about the L’Oréal Melbourne Fashion Festival Culture Program in 2012.  I know the work of Sarah crowEST from exhibitions at Craft Victoria and her sculpture that was part of Plinth Projects at Edinburgh Gardens in 2013. I’ve often mentioned Julia Deville’s spectacular mix of taxidermy and jewellery in this blog and I reviewed one of her solo exhibitions last year. I visited Janet Beckhouse’s studio last year and in this exhibition she has a sweet ceramic figure of Ganesha reclining.  And I saw a sculpture by Takahiko Sugawara that I’d reviewed in an exhibition in April of this year. 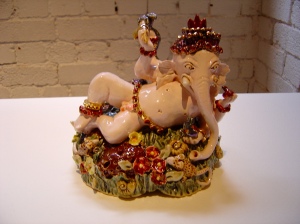 Personally it seems like work for me to narrow down a list of quality work to a single work and the chance to win a $100 voucher at the Craft Shop wasn’t an incentive. Given that you can ‘vote’ as often as you like, it seems more like a free lottery than a popular choice.

Writer, independent researcher and artist, Mark Holsworth is the author of the book Sculptures of Melbourne. END_OF_DOCUMENT_TOKEN_TO_BE_REPLACED
This entry was posted on Saturday, August 8th, 2015 at 11:14 AM and tagged with ceramics, craft, Craft Victoria, Janet Beckhouse, jewellery, Melbourne, People's Choice Award, Sun-Woong Bang and posted in Art Galleries & Exhibitions. You can follow any responses to this entry through the RSS 2.0 feed.
« Graffiti Characters
Fragments from the history of Melbourne’s graffiti »