Last month Mr Poetry, the sculpture of the fat man on the corner of Brunswick Street and Argle Street in Fitzroy, was hit by a truck. One leg and part of the plinth were broken in the accident. The outer bronze shell was cracked at the thigh and the steel armature exposed.

The sculpture is now at the Perrin Sculpture Foundry in Cheltenham and Bill Perrin, who originally cast it, is repairing it. Bronze sculptures are repairable, the sculpture was originally welded together from separate parts, the broken leg will be welded back into place and then application of the rust-red patination will conceal the weld.

I spoke to Peter Corlett about the accident. He is philosophical about the damage and told me that this is the second time that the sculpture has been hit by a truck. “These things happen in a vibrant city.” Corlett thinks that the truck was probably doing a three point turn and that the driver was probably watching the plinth in his review mirror but didn’t see the leg sticking out.

Although the figure will be repaired and reinstalled the minor damage to the side of Mr Poetry’s plinth will not be repaired. As the plinth is concrete there would be difficulty in getting the repair to match and Corlett thinks that the slight damage will fit in with the atmosphere of Brunswick Street.

The Yarra City Council has plans to install a bollard on the corner to provide protection for the sculpture in future. 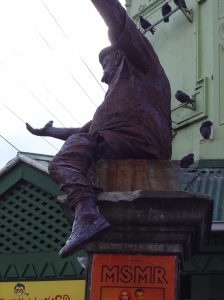 Read my earlier post for more on Mr Poetry. 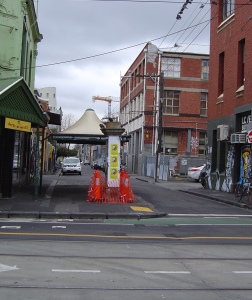 Writer, independent researcher and artist, Mark Holsworth is the author of the book Sculptures of Melbourne. END_OF_DOCUMENT_TOKEN_TO_BE_REPLACED
This entry was posted on Tuesday, August 11th, 2015 at 11:19 PM and tagged with bronze sculpture, Fitzroy, Mr Poetry, Peter Corlett, public art and posted in Public Sculpture. You can follow any responses to this entry through the RSS 2.0 feed.
« Fragments from the history of Melbourne’s graffiti
Institutional Art Galleries in Melbourne »