“Where the streets have no name.” U2

You won’t fine Blender Lane, Chook Alley or Zombie Dance Lane on any official map of Melbourne but all these locations do have handmade street signs attached to a neighbouring wall.

I can give you directions: Chook Alley is off Ilham Lane in Brunswick. Ilham Lane was only named in the last decade by the Moreland City Council, after John Ilham, the founder of Crazy John’s, the mobile phone dealers.

There are practical reasons for  naming every little alleyway in the city, especially in providing accurate directions in emergencies, so I hope that someday these pieces of guerrilla geography will become official.

These acts of guerrilla geography (a term to go with ‘guerrilla gardening’) are all associated with Melbourne’s street art (‘guerrilla public art’). Blender Lane is named after the next door Blender Studios that also runs street art tours and workshops. Both Blender Lane and Zombie Dance Lane have a large amount of street art and graffiti and Chook Alley comes off Ilham Lane which has some street art, along with an art gallery and  studios.

In the 1950s the Situationalists advocated the renaming and reimagining of buildings. Can you imagine the front of the NGV as the entrance to a train station? If you can’t see the B-grade movie I, Frankenstein. Location scouts for movies are a crypto-Situationalists but other people really do reinventing buildings, turning a factory gatehouse into a coffeeshop, warehouses into apartments.

In 1955 in his “Introduction to a Critique of Urban Geography” Guy Ernest Debord wrote: “The production of psychogeographic maps, or even the introduction of alterations such as more or less arbitrarily transposing maps of two different regions, can contribute to clarifying certain wanderings that express not subordination to randomness but complete insubordination to habitual influences (influences generally categorised as tourism that popular drug as repugnant as sports or buying on credit). A friend recently told me that he had just wandered through the Harz region of Germany while blindly following the directions of a map of London This sort of game is obviously only a mediocre beginning in comparison to the complete construction of architecture and urbanism that will someday be within the power of everyone.” 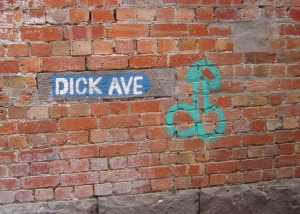