One gallery closes and another one opens: Brunswick Arts is closing and Neon Parc has opened a new second space.

Brunswick Arts is an artist run gallery that opened eleven years ago in a converted factory space built out the back of a suburban house. The factory space opened onto Little Breeze Street and served as an art gallery while various artists lived in the house, a key part of the gallery’s business model. However, recently building inspectors ruled it out the combination of a residence and gallery. 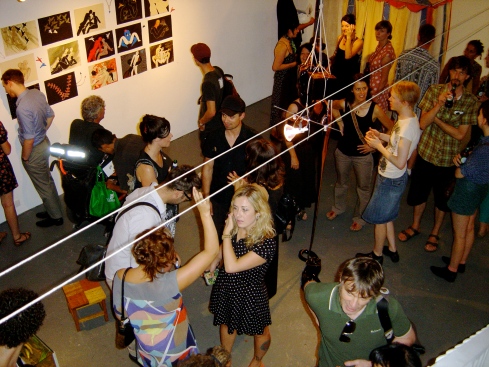 An opening at Brunswick Arts

“Burnt out” were two of the words used by Alister Karl, who has been on the committee running Brunswick Arts for at least a decade. To keep doing the same thing and hoping for different results is a sign of madness. You don’t have to keep on going, you can change.

The new Neon Parc second space on Tinning Street in Brunswick does not look like much from the outside, just another warehouse, but the detail of the name embossed door handle indicates of what is coming. Inside is an elegant white walled space for exhibiting contemporary art without compromise. 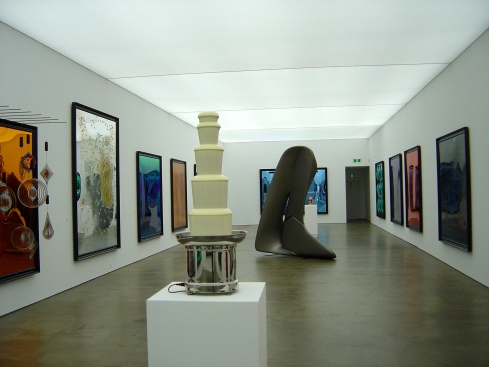 The current exhibition of sweet and shiny works by Dale Frank would have been impossible in Neon Parc’s small city space. Big and shiny, sweet and sticky are the aesthetics that Frank is playing with, or rigorously pursuing through variations. Basically what you can put, pour, smears, sticks and hangs in a camp parody of modernism on a shiny sheet of perspex. Complete with neo-baroque theatrical flourishes of the black frames and the white chocolate fountain.

Geoff Newton, the director of Neon Parc has lived in Brunswick for decades. Newton said that he was a bit worried about getting collectors in Melbourne’s south to cross the Yarra to see a gallery in Brunswick, instead he has collectors from Essendon visiting the gallery.

Neon Parc joins Tinning Street Presents… the first art gallery on the street along with artists studios and other creative endeavours. Tinning Street in Brunswick is becoming an artistic centre in Brunswick. Turning Tinning Street into a cul-de-sac by blocked off rail-crossing to cars has given some kind of character to the former industrial area dominated by two grain silos. The silos and Ilham Lane off Tinning Street are good street art and graffiti areas.

Galleries have opened and closed in Brunswick before; read my post A Hipster Conversion.

Writer, independent researcher and artist, Mark Holsworth is the author of the book Sculptures of Melbourne. END_OF_DOCUMENT_TOKEN_TO_BE_REPLACED
This entry was posted on Wednesday, November 18th, 2015 at 11:55 AM and tagged with art gallery, artist run initiative, Brunswick, Brunswick Arts, Dale Frank, Neon Parc and posted in Art Galleries & Exhibitions. You can follow any responses to this entry through the RSS 2.0 feed.
« David Russell’s Street Photography
Science Friction @ Counihan Gallery »