What is the best frame for contemporary art? I don’t mean, a physical wooden frame around a painting or drawing, but the architectural, psychological, intellectual frame around a work of art.  It is the frame that gives the context of art. The idea of art is itself a conceptual frame in which to view art for ultimately the word ‘art’ is a frame around a set of things. The proscenium arch frames traditional theatre. Television programming frames tv shows. The covers of a book, libraries, bookshops, even Kindle digital readers can all frame a work of literature. 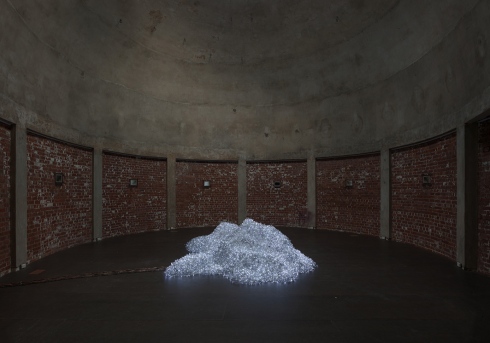 It is the difference in frames that explains why people, so often, say that a band is better live than in recordings. For the frame is not neutral. It has its own energy. It is a nebulous area, like the halo that exists around the sacred. There is the magic of stepping out on to even an empty stage.

Art is created for particular frames and sometimes these frames are determined by other factors. The playing time on a 45rpm record determined the length of a pop music single or the hight of the stairway up to Francis Bacon’s studios determined the maximum size of his painting. However, instead of the modernist dream of art breaking out of its frame, an act that would ultimately destroy any exclusivity to the category of art and led to its complete merger of art with life, contemporary art has created a contemporary art frame around itself.

Contemporary art makes more demands on the exhibition space than previous art, to the point of physically altering it. Never before in the history of art have so many plasterboard walls been built for art. These demands on the exhibition space because contemporary art is self-conscious and aware of its dependence on the space as part of the context of being exhibited.

What is the best frame for contemporary art? I wish that I could answer this question but I’m realistic enough to accept that there isn’t one.

Writer, independent researcher and artist, Mark Holsworth is the author of the book Sculptures of Melbourne. END_OF_DOCUMENT_TOKEN_TO_BE_REPLACED
This entry was posted on Wednesday, December 2nd, 2015 at 4:53 PM and tagged with art theory, David R. Marshall, frame, Lucas Maddock and posted in Art Galleries & Exhibitions. You can follow any responses to this entry through the RSS 2.0 feed.
« Andrew Rogers Sculptural Sequence
Vexta’s Wildness »