“Where is the monument to the folk who took a stand against the war rather than those who capitulated to its madness?” Robert Nelson asked in The Age on Remembrance Day, 11 November, 2015

Dear Robert Nelson, the monument exists but it is not in the architecture of state power, the column, the triumphant arch or faux tomb of imperial power dominating territory. It is a single word “Dada”.

Dada, a little word that means everything and nothing. A word like a Buddhist mantra capable of destroying all illusions by using it as a substitute for all other words. Instead of patriotism, dada; instead of reason, dada.

Not that the word works like magic but the question that Dada posed still remains as potent as ever. What is art and culture doing other than making various governments look like a humane and decent society, masking and distracting from the genocide, crimes against humanity and war crimes? If this is how much of an improvement the best of art and culture can do then why continue with it?

This is not a joke, this is a serious point. 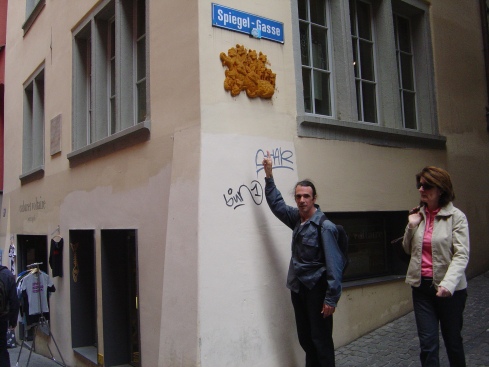 Mark outside the Cabaret Voltaire in Zurich

One hundred years ago on the 5th of February 1916 in Zurich three “oriental gentlemen,” as Hugo Ball described them in his diary arrived at the newly formed Cabaret Voltaire. The Cabaret Voltaire was a music and poetry night that Hugo Ball was running at the Holländische Meierei tavern in Zurich. Hugo Ball had had left Germany for neutral Switzerland, he had been an idealistic German patriot before he saw the horror war for himself.

The “oriental gentlemen” were certainly from the east as they were Romanian. They were the architecture student and artist, Marcel Janco, his brother George and a 19 year old poet who was calling himself, Tristan Tzara.

The reason why they were there was because Romania had ended its neutrality in 1916 and joined the war on the Allied side. It was one of the stupidest decisions of the war; outstanding even considering the extraordinary stiff competition of stupid decisions made in World War One. The Romanian army was obliterated.

The three young men kept on saying “da da”, “yes yes” in Romanian. The word “Dada” was invented later that year, around 11 April 1916, the first Dada periodical appeared over a year later in July 1917. There is a long standing debate about who invented this word but it has to be remembered that they were all very drunk at the time (or using other drugs, yes, I’m looking at you Herr Huelsenbeck and your cocaine).

Historical debates about dates aside, on Friday night in Clifton Hill DADA lives! 1916-2016 celebrated a century of Dada. Over a hundred people packed into the narrow space of the shopfront bar with its tiny stage at the back with of poetry and performance. Sjaak de Jong was the MC for the evening. Most of the performances were of original material but Santo Cazzati did read a historic Tristan Tzara Dada manifesto and perform a recognisably accurate version of Raoul Haussmann’s poem, phonème bbbb.

People try to laugh Dada off but that is just a desperate tactic to hold onto the certainties of dictatorships. Attempts have been made to quarantine Dada in art galleries and libraries around the world but it keeps on breaking out with nihilistic force. For it is nothing, it is ridiculous and is better than any god/country/insert reason here that you can dream up as nobody has ever killed or died for it.

Writer, independent researcher and artist, Mark Holsworth is the author of the book Sculptures of Melbourne. END_OF_DOCUMENT_TOKEN_TO_BE_REPLACED
This entry was posted on Saturday, February 6th, 2016 at 8:06 PM and tagged with Cabaret Voltaire, Clifton Hill, Dada, Hugo Ball, Robert Nelson, Romania, Sjaak de Jong, Tristan Tzara and posted in Art History, Culture Notes. You can follow any responses to this entry through the RSS 2.0 feed.
« Presgrave Place Renaissance
Sensations of Art »