Public Sculptures in Melbourne by Gera Tonge and Stanley Hammond M.B.E. is a 24 page pamphlet printed on green A4 paper, folded to A5 size, and bound with two staples. Published around 1985 it is a fascinating time slice through the history of Melbourne’s public sculpture. Thanks to William Eicholtz for this generous little gift. 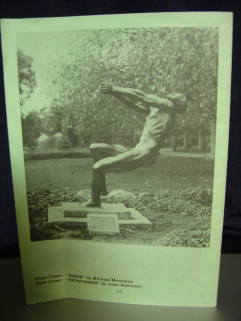 Basically the pamphlet contains two pages on “Methods and materials used in producing public sculpture”, a list of 100 sculptures, a map of their locations and biographies of  some of the sculptors. It is illustrated with black and white photographs of some of the sculptures.

As a subtitle the pamphlet declares that it was intended as “a tourists guide”. The map is divided into three locations that are suggested “as a walking guide” “which can each be explored easily on foot.”

Several sculptures are no longer in their original locations, others have moved and the total number of sculptures in these areas has doubled in the thirty years since the pamphlet’s publication.

It appears to be self published. Although there is no date it is after the move the Vault to the banks of the Yarra 1983. The controversy over Vault piqued Melbourne’s interest in public sculpture and may have been an additional motivation for publication.

Stanley Hammond knew the history of sculptures in Melbourne because he had lived it most of it. Born in Trentham Stan had started off as a stone mason working on the Shrine Remembrance before becoming one of Orlando Dutton and then Paul Montford’s assistants. Hammond made many war memorials during his career, including the lions at the Boer War Memorial on St. Kilda Road. He also made the figure of John Batman near the corner of Collins and Market Streets.

Writer, independent researcher and artist, Mark Holsworth is the author of the book Sculptures of Melbourne. END_OF_DOCUMENT_TOKEN_TO_BE_REPLACED
This entry was posted on Saturday, June 4th, 2016 at 7:39 PM and tagged with Gera Tonge, Melbourne, sculpture, Stanley Hammond, Vault, William Eicholtz and posted in Art History, Book Reviews, Public Sculpture. You can follow any responses to this entry through the RSS 2.0 feed.
« Graffiti Alley in Toronto, Canada
Zombie Suburbia »