Legend has it that the suburbs are full of zombies. They must be somewhere because the suburbs look so dead. Is it quiet because the rampaging zombie hordes has already passed by? It looks dead because it is so quiet and there is all this stuff around that is never used. The suburbs are so quiet that Melbourne psychogeographer, Nick Gadd, in his blog post “The real and the fake in Abbotsford”, had to asks himself: “where is everybody?” 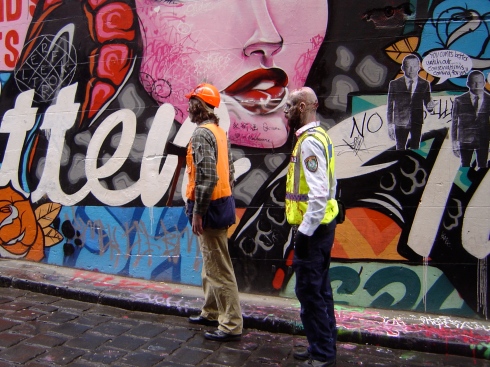 The suburban zombie might look like ordinary people but they lack a life. Suburban zombies are often employed; zombies make good workers for menial labour, but they are not living their own life.

How to live your own life is the most important cultural questions of all time. Not to be confused with how to live a life, or the life that others want you to live. Others might value your life for their own reasons – some just want to eat your brain.

The classic post-war consumer dream was sold to millions of zombies: a TV, a car and a house in the suburbs. The payments for this borrowed dream go on for ever. Life in the suburbs is a commercial product and fear is good for business. The suburb continues to sell as a product and it’s nervous. Are the suburbs really full of transitory inhabitants watching the house prices, always ready to sell up and move on if the price is right or if the zombie horde descends on the area? This mix of home life and commerce contributes to fear and further alienates the suburbanite from their home. Even cars are kept largely impersonal to maintain the best resale value.

Examples of suburban paranoia are common. The secrets keep building up in the suburbs, they are so discreet and genteel. Your neighbour might be judging you as criminal, alien or anathema. The paranoia, the susceptibility to fear mongering that such suburbs create. It appears idyllic except that the suburban mentality is paranoid. Isolated in the suburbia, living next to unknown neighbours, fear is an understandable response.

Suburbia was designed to create a homogeneous, assimilated population. The soporific repetition of suburban landscapes creates an unnerving sense of déjà vu. Here and there are the odd flourishes in suburban architecture, gardens or decoration. Small triumphs against conformity or simply demonstrations of eccentricity?

There is an absence of any real landmarks or even hubs in the suburb, means that there is no logical place to rally the population against the ravenous zombie hoards. Transportation designed on a circulatory system of capillary roads feeding into arteries view hubs as undesirable points of congestion. Place where several paths intersect are designed to have no holding qualities.

The only place in the suburb that has any holding power is the home. It is there that the population intends to bunker down. Fear of the zombie hordes have driven people to retreat to fortified zones at the back of their houses only venturing out to their front yards for the daily commute.

Design responds to both the realities of life and the unrealities of desires. The mass experience of suburban life tried to create a middle ground between the inner city, cosmopolitan life and the country life for the middle class. The suburbs are a reactionary location, rejecting the urban environment rather than trying to improve it. The problem with suburbs is not simply a question of design any more than it is a choice of what weapons to use in the zombie apocalypse. It is a problem of how to live and it will require both changes in the mind set of the population and bricks, concrete and steel of the city.

Writer, independent researcher and artist, Mark Holsworth is the author of the book Sculptures of Melbourne. END_OF_DOCUMENT_TOKEN_TO_BE_REPLACED
This entry was posted on Wednesday, June 8th, 2016 at 9:28 AM and tagged with Melbourne, Nick Gadd, paranoia, suburbia, suburbs, zombie and posted in Architecture, Culture Notes. You can follow any responses to this entry through the RSS 2.0 feed.
« Public Sculptures – a tourists guide
Medieval Graffiti »