Trying to imagine what the National Gallery would have looked like when it was in the State Library. At the same time as looking in the future at what Patricia Picininni images the evolution, or the genetic alteration of car drivers. 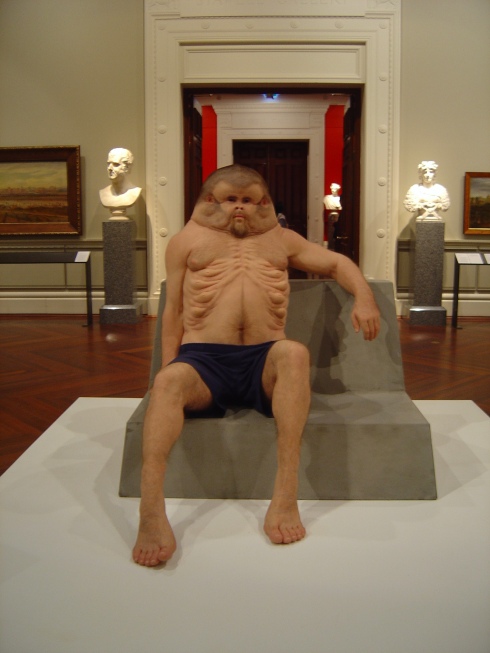 Prior to the construction of the National Gallery of Victoria on St. Kilda Road in 1968 the National Gallery of Victoria was located in the State Library. It consisted of the Swinburne Hall, the painting school studios and three galleries. What were the McArthur and La Trobe galleries are no longer open to the public, but the Cowen Gallery and the two linking rooms, are still used for exhibiting art at the State Library.

A century ago it would have looked rather different, the now redundant skylights would have allowed diffused natural light into the galleries. The paintings and prints would have been hung Salon style, hanging multiple works right up to the ceiling to fill the wall. Rather than the way it is hung now with a single row of works at eye level along the wall. On the walls would have been Alma Tadema’s The Vintage Festival in Ancient Rome, Watt’s portrait of Tennyson, and John Longstaff’s Breaking the News. In the middle of the room there were marble statues of the royal family by Charles Summers.

The numerous marble busts by Charles Summers still on exhibition reminds me that he was allowed to arrange the sculptures in the gallery. Summers placed plaster casts of Michelangelo next to a plaster cast of his Burke and Wills Monument to demonstrate his references. Summers’s ego exhibited in this arrangement amused some English visitors but for nineteenth century Melbourne he was their Michelangelo.

The plaster casts and etching of works by other artists hanging in the gallery indicate that issues of originality and even the function of the art gallery was very different.

In the present the art gallery at the State Library is an odd mix of art from Melbourne’s past, with a particular focus on landscapes of Melbourne and portraits of Melbourne identities, along with some contemporary art. Above the stairs hangs a tapestry by the Australian Tapestry Workshop based on a painting by Juan Davila. 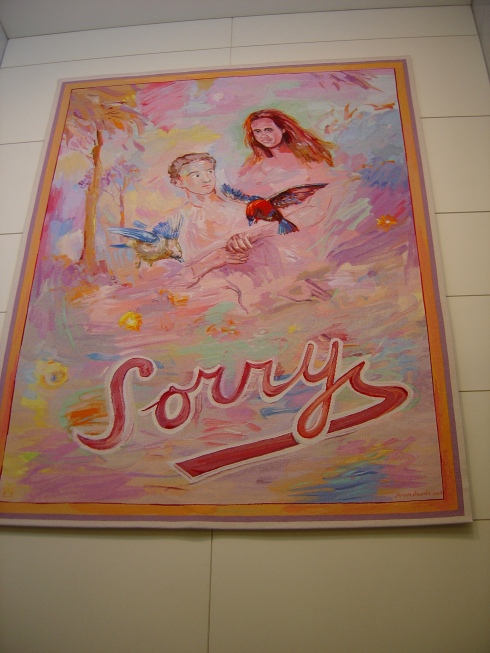 Graham was just sitting there in his shorts going viral as people crowded around taking photos of him. After a selfie with Graham in the background the visitor might spend awhile with the headphones and iPads finding out why Graham looks that way and how the collaborated between the TAC, Patricia Piccinini, a leading trauma surgeon and a crash investigation expert produced him. Piccinini’s art makes an impact both in the gallery and online and that makes her work perfect for a road safety awareness campaign.

I wonder how Graham would have been greeted, if he had been created a century ago, and where would he have been displayed in Melbourne. Undoubtedly he still would have received a lot of media attention.

Writer, independent researcher and artist, Mark Holsworth is the author of the book Sculptures of Melbourne. END_OF_DOCUMENT_TOKEN_TO_BE_REPLACED
This entry was posted on Tuesday, August 9th, 2016 at 10:15 AM and tagged with Charles Summers, Juan Davila, Melbourne, National Gallery of Victoria, Patricia Piccinini, State Library of Victoria and posted in Art Galleries & Exhibitions, Art History. You can follow any responses to this entry through the RSS 2.0 feed.
« Three Exhibitions in Brunswick
The City As Art »