Confined 8 is a large exhibition of art by hundreds of Indigenous artists who are currently in, or recently released from a prison in Victoria. There are about two hundred paintings and other works of art are packed into the St Kilda Town Hall Gallery. 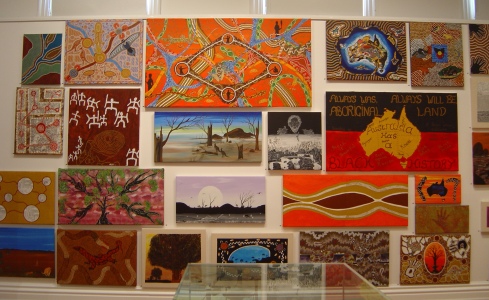 It is impossible to sum up all this art in a few words. There is a lot of variety from traditional to contemporary art and all kinds of mixes in between by Aboriginal and Torres Strait Islanders from across the continent. The art, often painted in prison cells on small canvases, are such careful, delicate and considered works; the quality is often very high for amateur painters basically because of the time taken on them. 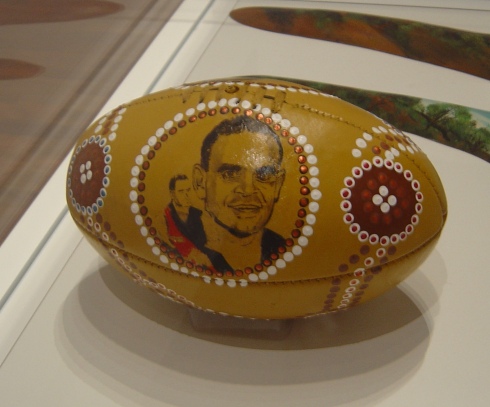 Waridub’s painted football is a great mix of tradition and contemporary life: I’ve never seen a painted football before. “Legends of the Game” depicts Michael Long and Adam Goodes. (There should be a series of these balls; what about Mal Meniga?)

Ray Traplin of Kuku Yalandji people painted an impressive and colourful scene in “Cape York Hunting Grounds”. Traplin and many of the other artists depict animals, birds, fish, lizards, insects in meticulous dots or cross-hatching work however few can combine so many images as Traplin does into one spectacular painting.

The exhibition was organised by The Torch. The Torch runs the Indigenous Arts in Prisons & Community program. It uses art as a forum for cultural exploration to provide indigenous men and women in custody and on release with a new way forward. This has been enhanced by new legislation in 2015 that allows Aboriginal and Torres Strait Islander prisoners to keep any money that they make from art sales. The Torch does not take any commission on the sales and the money from art sales is held in trust by Corrections Victoria until the prisoner’s release. Having money to fund a new life on release from prison is important.

A few paintings are NFS (not for sale) meaning that they had already been given to a relative. It is sad that it might be the only time that they will get a painting is when one of their relatives is locked up.

Prison art is a much neglected part of Aboriginal art history. It is an important aspect due to the over representation of Aboriginals in Australian prisons; “The world’s worst levels of detention of Indigenous people” according to Gillian Triggs, President of the Human Rights Commission. So you can look at Confined 8 as either rehabilitation or resistance, survival in the face of genocidal policies and cultural destruction.

Writer, independent researcher and artist, Mark Holsworth is the author of the book Sculptures of Melbourne. END_OF_DOCUMENT_TOKEN_TO_BE_REPLACED
This entry was posted on Friday, January 20th, 2017 at 9:41 AM and tagged with aboriginal art, football, Michael Long, prison art, prisons, St Kilda Town Hall Gallery, St. Kilda, The Torch and posted in Art Galleries & Exhibitions. You can follow any responses to this entry through the RSS 2.0 feed.
« 2016: Dada, Punk, Parties
The Great Australian Lie »