For the past three years murals, very large multi-story painted walls are the popular form in Melbourne’s street art. Murals are also very popular in advertising and with socialists. Van Rudd says that wants to revive the tradition of political mural painting in Melbourne that happened with Geoff Hogg in the 1970s. 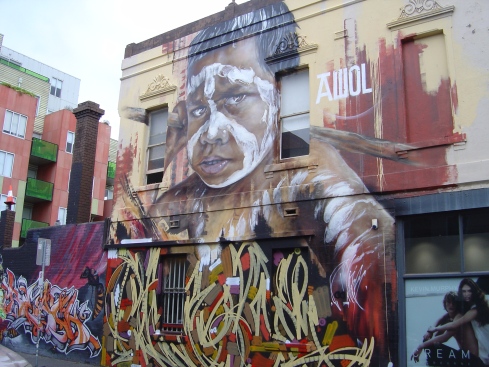 Murals are seen as community art solution, read Tony Matthews and Deanna Grant-Smith “How murals helped turn a declining community around” in The Conversation, as well as an advertising technique. Dvate’s painted banner for The Lion King in 2015 or HaHa’s 2016-17 3MMM banner at Macaulay railway station, a favourite old haunt of HaHa when he was running around the city getting his name up. Smug’s mural on Otter Street promoting a luxury apartment development, makes gentrification cute. The popularity of murals makes for endless commercial applications.

I think that I lost a lot of my interest in Melbourne’s street art when murals became the dominate form of street art. I don’t like most murals, street art or otherwise, as I have already written about the Harold Freedman mosaic mural on the Fire Station. So I don’t feel as motivated to write about street art, although I have written about Rone and Adnate’s murals.

I’m not sure what it is about murals that I don’t like, after all they are just very large paintings. I do like a few murals in Melbourne. The Keith Haring mural in Collingwood but that is because I like his other work and the mural is simply a large example. I don’t think of the large walls by sprayed with fire extinguishers full of paint by Ash Keating and others as murals because they are just paint whereas a mural is about something.

Often murals are so about something that it feels like you are being lectured or advertised at. I’m not sure that I want the intended message or non-message of a mural and even if I do then what about people who don’t? The intended mass audience of a mural makes is like advertising. Whereas I like art that is aimed at a small audience rather than the lowest common denominator. The bigger the audience does not mean the better the art; size is kind of pornographic.

At other times there is so little content in a mural, like Rone’s faces, that being content free and abstract would have something more than these substitutes for content. For this reason I found Doyle’s Empty Nursery Blue to be more artistic than any and all of Rone’s murals.

I was also wondering if it is because murals lack a human scale. Murals are different to graffiti pieces in terms of scale. The reach of a graffiti writer defines the height of a piece, the arc of the curves so that a piece of graffiti reflects a human scale. Whereas the size of a mural is determined by the size of the wall and the equipment used. 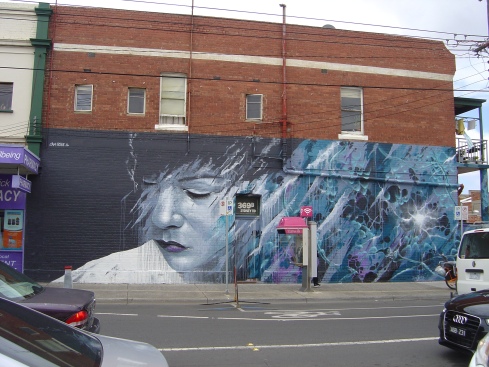 At the beginning of the twentieth century for the first time in history there was enough young people not just to fight a world war and to start to create subcultures. With the Dadaists there was still too few of any of them to bother with classifications. The history of eccentrics leads people to retrospectively classify them in subcultures, those strange attractors in the chaos of society. 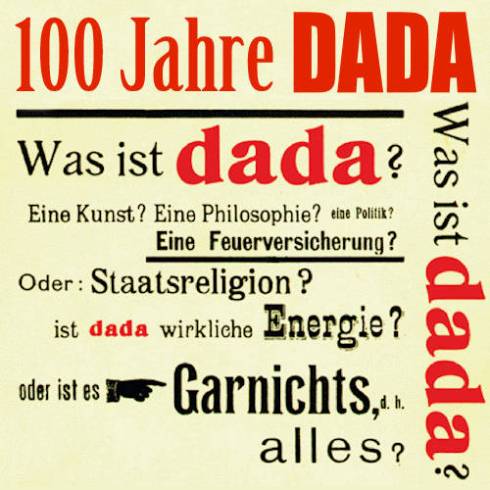 Greil Marcus in his book, Lipstick Traces tries to trace Dada and punk back to the Anabaptists. Others trace them back to Cynics of Ancient Greece. Was Diogenes was a hippy or a punk?

Instead of wondering about future histories or museums, instead of trying to trace an illegitimate ancestry for Dada or punk, look at the attraction. What was the reason for their existence? Why do people around the world identify with them?

Dada and punk gave expression to a status frustration of talented and intelligent youth who had no influence in the direction of art, culture or the world. Dada was the first of many cultural guerrilla resistance forces. Operating in occupied territory, these movements attack and retreat, sometimes melting away into the general population. Their tactics change to take advantage of the local terrain and exploit weakness in psychosocial defences. For such movements survival is the same as success and both Dada and punk did so much more than just survive. They spread rapidly. Perhaps this was because the conditions were right but more likely there were already people who were doing that kind of thing looking for a larger movement to identify with.

The thing about Dada was that it was an art movement not just for the professional, trained artist, but for anyone. Many of those involved in Dada did not continue to be artists because they were medical students who became doctors, students who became teachers. Is it any surprise that Dada didn’t survive long with such an incoherent group of proto- punks, hippies and new agers.

The Cabaret Voltaire and the Dada Gallery in Zurich ended like so many artist run initiatives to come after them. Wednesday 9th April 1919 was the date for the final grand soirée in Zurich. By then Dada had already spread around the world. The debate as to where punk started, USA or England, mirrors the debate about the origins of Dada. The meme of Dada was transported in person by members of the Zurich crowd but it was also spread by mail. The impact of the postal service on Dada and subsequent similar movements cannot be ignored.

In 1917 Richard Huelsenbeck spreads the meme to Berlin where Club Dada was formed. In 1918 Dada spread to Max Ernst and Johannes Baargeld in Cologne via Hans Arp. Marcel Janco took Dada back to Rumania were Contimporanul is formed. In 1918 Kurt Schwitter’s applied to join Club Dada in Berlin but is rejected so he creates his own Merz movement, or magazine, or both.

Dada was already in New York with Francis Picabia acting as the link between the Dadaists in New York and Zurich. He was already doing his own thing, publishing a zine in Spain before he ever heard of Dada. Dada continued to spread in Barcelona with Picabia to a mix of French, English, Italian and Russian.

There is the big Dada/Surrealism split in Paris in October to December of 1919. But to the east new Dada like groups are still announcing themselves. Tank in Zagreb 1922, The Green Donkey Group in Hungary, 1927 (Odon Palasowki). In Japan it was Mavo.

Dada eventually arrived in Melbourne in 1952 with Barry Humphries, Clifton Pugh and Germaine Greer where it was known as Wobboism. It was so old by then that neo-Dada movements had already started in Japan and the US.

In 1977 Chris Dyson was playing guitar with Paul Kelly in High Rise Bombers. However instead of pursuing music Dyson went on studying painting at Victorian College of the Arts and later Masters from Monash University. Dyson studied at the VCA 82-84 and then taught there until 1998. In the early 80s Chris Dyson saw an exhibition of aboriginal prison art at the VCA gallery school. He remembers a painting titled; “The park across the road from the bank I robbed.” A few years later Dyson was teaching art at Pentridge.

Many of the prisoners were so heavily medicated they were like zombies for most of the month. Dyson regarded most of the prisoners in G Division as people who couldn’t deal with the outside world. They painted dicks or marijuana leaves in acrylics. No oil paint was allowed due to fears from the guards at what other uses the prisoners could make of them. There was no music therapy after Gary Web David swallowed the metal guitar strings.

He wasn’t there for long somewhere between a year and eighteen months on shitty pay. He felt intimidated; the memo about the body search option, the missing art materials and general harassment from the guards. One day they wouldn’t let him go in with his cigarette and a prisoner ends up giving him a White Ox cigarette. Then the guards question him about what he is going to give the prisoner in return for the cigarette. He considered teaching jobs elsewhere in the Pentridge and later in other private prisons but corruption and lack of support from the guards weighed against that.

Dyson felt that the guards were worse than the prisoners. He only remembers seeing the guards body building with the gym equipment, never the prisoners who were all over weight from the stogy prison food and the side effects of psychiatric medication.

Using his old connections Dyson did get Paul Kelly to perform at Pentridge. He remembers the afternoon as a great performance followed by a BBQ.

This is some of my research for a chapter on prison art for my book about art and crime. The book is planned to be published later in the year, so I have been working on that and neglecting this blog. I don’t think that much this will end up in the book except as background because that chapter is taking a different direction, so I thought that it would make a good blog post.

I’m not sure of the accuracy of this claim outside Anstey Station, but it has been at least 20 years of providing a great legal wall. 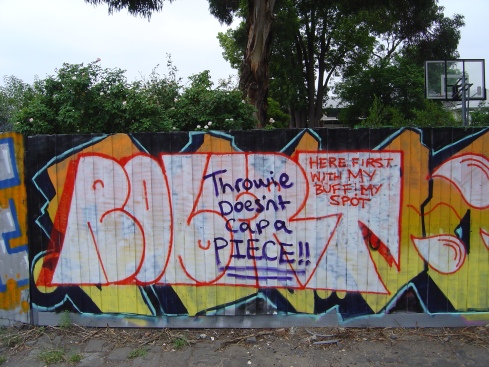 I am interested in the ethics of graffiti writing and the messages that debate this. Often this is the ethics of what counts in the claim of “I was sitting there first.” Claiming a right to a chair in bar or to occupy a spot by the pool or to paint a wall when such things are a limited resource by virtue of a prior claim of occupancy. Amongst graffiti writers there is a transmission of a code of ethics through an oral tradition, as well as, messages written on walls. 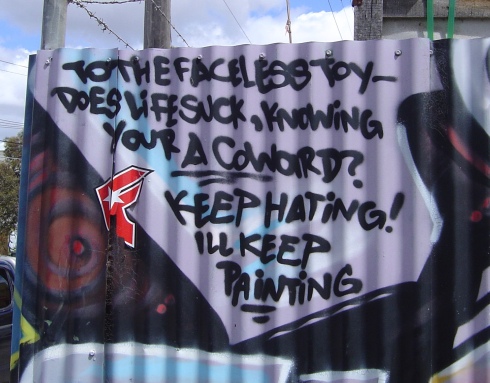 Generally graffiti writers are only interested in communicating with other graffiti writers but occasionally they want to make a point to a wider audience. Messages written on walls, as an adjunct to a piece is the only direct form of communication. This note from Bailer was probably intended for a idiot who often caps pieces in the area.

“No Style” is an irony free cap over a cleanly executed bubble letter style piece by Speds.

Old skool graffiti writers do not respect anyone without good aerosol skills just like the old school conservatives would not read anyone who could write neat copperplate with prefect spelling and grammar.