Akio Makigawa’s sculptures are elegant works amid the often ludic, bombastic, and inappropriate public sculptures in Australia. Now there is an exhibition of his sculpture at the NGV. The exhibition is on the foyer of each floor of the NGV Australia at Fed Square. It is part of the NGV’s series of exhibitions about sculptors that has included Inga King, Bruce Armstrong and Lenton Parr.

Makigawa is also a break from the list of European names in the history of Melbourne’s public sculpture. Makigawa moved to Australia in 1974; the year after the White Australia policy finally ended in 1973. The sculptures on exhibition are familiar because Makigawa’s public sculptures are all around Australia. You have probably seen his sculptures as they are out the front of buildings in most capital cities and regularly appear behind parliamentarians giving press conferences in the gardens of Parliament house.

In public spaces his sculptures influence the space around them. It is a larger space than just the negative space around the sculpture; it is a space, a pause or rest, in the movement of the city. They are not obvious and neither are they rigorous theoretical abstractions. Their rigid geometry dissolving into natural forms of a leaf or flame of marble or resin. 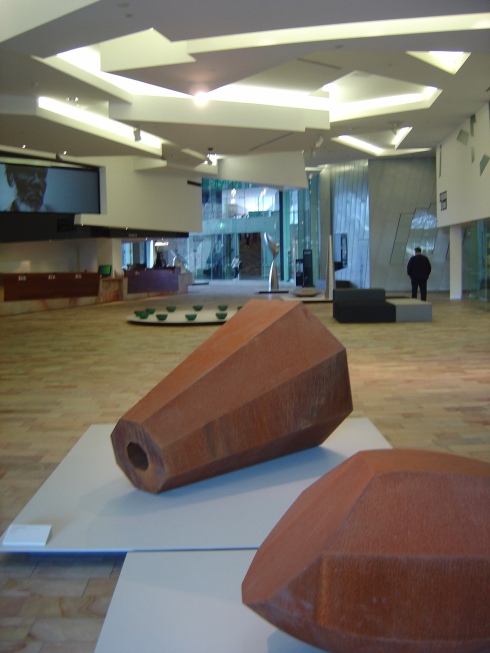 Seen in an exhibition, the viewer quickly becomes familiar with the similar shapes repeated in variations of material: corten steel, stainless steel, marble… Most of the work in the exhibition was very similar to his public sculpture until the third floor where there were three early works that are very different. In these early works lighter materials: papier-mâché, wood, rope, cotton… contrasting heavy materials, like stone and lead.

Also on the third floor is a collection of his maquettes, models for his sculptures. These are interesting because where other sculptors will use any convenient material, Makigawa used exactly the same materials that he used to make the final sculpture. There is a respect for the materials in his work, in the alternating, contrasting surfaces.

For more on Makigawa’s public sculptures.

Writer, independent researcher and artist, Mark Holsworth is the author of the book Sculptures of Melbourne. END_OF_DOCUMENT_TOKEN_TO_BE_REPLACED
This entry was posted on Saturday, September 30th, 2017 at 11:59 AM and tagged with Akio Makigawa, maquette, Melbourne, NGV, sculpture and posted in Art Galleries & Exhibitions, Public Sculpture. You can follow any responses to this entry through the RSS 2.0 feed.
« Street Art Sculpture 8
Looking for an exhibition »