The statue wars of 2017 sprang to prominence in the USA although the debate had been going for some time. Around the world people have been asking what to do with these monuments to evil men, from Cecil Rhodes in South Africa to General Robert E. Lee in America to John Batman in Melbourne. The debate about these statues has often been furious, ill-informed and poorly reasoned; so more of a war than a debate. However, if I have learnt one thing from it is that the greatest educative value that a statue can have is when it is being torn down.

I doubt that statues on pedestals are the right thing to erect but then people have been making that observation for over a century. Back then the craze was for putting up these same statues and it was called ‘statuemania’ because it was obvious that the many statues being erected were insane, not just because of the quantity but given the direction of civil society, reason and art. The only purpose in putting something on a pedestal is to worship it. The great man theory of history is not taken seriously by historians any more but some conservative groups still think that a statue will do something worthwhile.

Many people in the debate were confusing, deliberately or idiotically, the monuments with the history that they were commemorating. If tearing down statues is some kind of ‘Stalinist revisionism’ (as a reason-retarded Prime Minister Malcolm Turnbull claimed) attempting to rewrite history then what were the US troops doing with that statue to Saddam Hussain in Bagdad? In Melbourne this year the controversial statue of John Batman was taken down by a property developer to redevelop the site; I doubt that motives were revisionist or that the statue will ever be permanently installed anywhere.

Do the sculptors who made these care about the fate of their statues? Not beyond the final payment; if I have learnt one thing about the kind of people who make these statues is that they are professionals.

Should these statues be preserved for the sake of their artistry? Ha ha… you were making a joke?

Moving on the next question is: what to do with these empty plinths that the statues leave behind? Consider London’s Fourth Plinth in Trafalgar Square or, for a local example, Plinth Projects in Edinburgh Gardens.

Outside the St Kilda Town Hall there is this ‘monument’. Just as you thought it must be meaningful with the man, the airplane and the classical temple turns into crazy snake fun. Made of cast bronze, the sculpture and its large plinth is ironic in its content, materials and form. Local artist Richard Stringer’s Monument for a public building, 1994, turn the form of the monument into self-referential postmodernism.

Friday night @ Off the Kerb

Off the Kerb is a favourite for street artists exhibiting and the exhibitions that opened last Friday night were very much about street art. 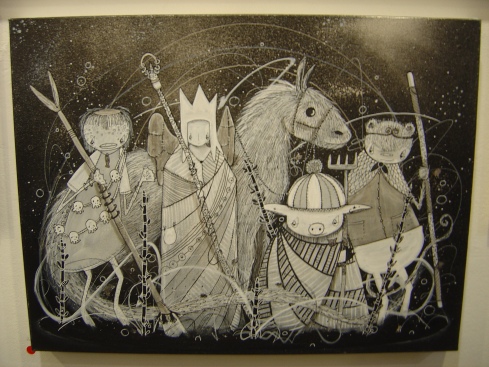 “House of Ghosts” by Barek features both paintings and sculptures of Barek’s whimsical ghosts. A large ghost house model serves as centre-piece for the exhibition, visible from the street through Off the Kerb’s shopfront window. Barek’s ghosts and other characters have a narrative sense but often they seem like the ghost of rabbits frozen in the headlights of the artists vision. Although he has long had a presence on Melbourne’s street’s with his paste-ups Barek is now based in Melbourne after moving from Brisbane. 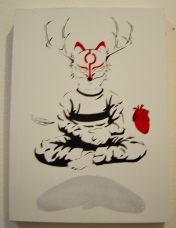 “Hard Boiled Wonderland & The end of the World” by Akemi Ito and Drasko (who signs his work DB) is an exhibition of stencil art. Akemi Ito looks to Japan for inspiration whereas Drasko looks to America. They also have a different approach to stencil making; Akemi hand-drawn stencils emphasis the line whereas Drasko uses the blocks of colour to create his images. Drasko’s spray painted rubber floor-pieces are both effective and unusual. 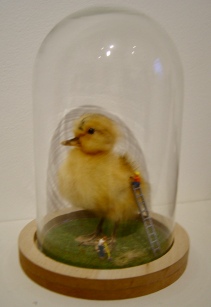 Tinky, “Sam knew this was going to be his most impressive topiary attempt yet.” 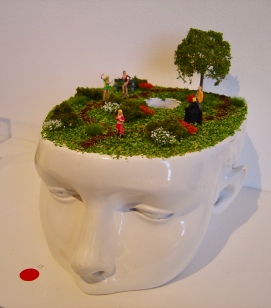 Tinky, Wilbur loved going for his evening walk in the park.

“Tinkyville: Land of Folly” by Tinky packs in 30 of her Lilliputian models to one of the upstairs rooms. Her tiny HO scale figures are often oblivious of the larger scale objects that they are set in. The humorous scenes are full of action, their titles adding to the narrative and the joke, like “Sam knew this was going to be his most impressive topiary attempt yet”. Even at this scale Tinky’s work can also be found in Melbourne’s streets; I first saw her work in Presgrave Place.

“Same Same and Different” Mie Nakazawa monoprint line drawn heads; I hesitate to use the word ‘portraits’ because they are all untitled. They looked inspired by the Austrian Expressionist artist, Egon Schiele. Unlike all the other street artists Nakazawa is a Sydney-based contemporary printmaker who has also painted a few murals in Sydney. 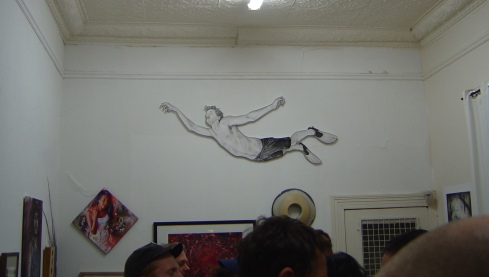 There were galleries with exhibitions opening all along Johnston Street on Friday night. There was a group exhibition with work by more of Melbourne’s artists associated with Melbourne’s streets. Be Free, Baby Guerilla, HaHa and Suki amongst almost twenty artists exhibiting at a pop-up exhibition at 178 Johnston Street, as part of the first birthday celebrations for Qbank gallery from Queenstown, Tasmania. 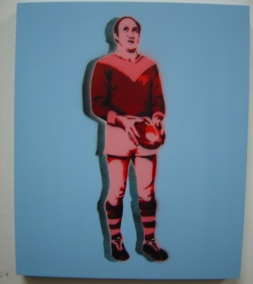 The earth art of Astral Nadir

Aside from the odd stencil or tag, that could be on a wall, Melbourne’s street art has rarely colonised the sidewalks. On the sidewalks you are more likely to encounter industrial graffiti, markings put there by council or utilities workers. That makes Astral Nadir’s paintings an exception. 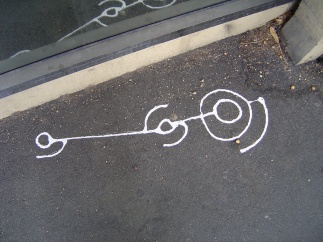 Resembling ancient symbols, crop circles or Nazca lines, these patterns on the ground refer to the stars and sky. Attractive small abstract patterns of circles and curves connected with straight lines. They are a kind of tagging using images instead of an alphabet. They are also signs mapping a linear trail taken by the artist around Fitzroy and have a relationship with fire hydrants, poles and edges of the sidewalk.

Recently, I discovered that I was walking the same path as Astral Nadir when I was out looking at art galleries and street art. As I walked along Gertrude Street and up Smith Street I started to look for and photograph for the next piece but I didn’t see them all. On returning home and reviewing my photographs I noticed another one, on the pavement next to a wall with a piece by Shida that I was focused on.

After posting some of my photos on Facebook, I was told that it was the work of Astral Nadir. (Thanks Liz Sonntag.) The rock’n’roll aspect of Astral Nadir’s name combine the high with the low in a synthesis where contradictions are resolved. I’m not sure how long ago these were done but the Instagram photos @astral_nadir are all from this year.

Although it is not great art, it is an exception to the ordinary and I do look forward to finding more.

Looking for an exhibition

First Site Gallery at RMIT “I Feel Like I Know You” by Chris Bowes, not the musician but the little known Brisbane-based artist. Except I think that the image is a portrait of Chris Bowes, the heavy-metal musician. Each of the subjects of the portraits was a ‘Chris Bowes.’ Bowes has added something more to the usual mosaic of tiles creating an image as each of the tiles is the logo of a page that the subject liked on Facebook to create a portrait of them. It was a visually and intellectually pleasing exhibition. 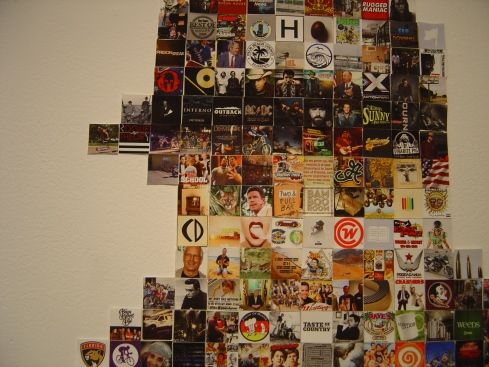 Another exhibitions at First Site was also looking at our digital image but unlike Bowes, Stephanie Milsom “All of It” was visually boring and focused entirely on herself. It is always more interesting to focus on other people rather than yourself.

I have a physiological reaction to bad art; it feels sickening (in the past bad poetry has caused me to actually vomit), oppressive and there is something like mental claustrophobia. Then there is the dull boredom of another average exhibition. I try to pay attention; maybe I haven’t paid enough attention, maybe the artist will improve in time, maybe it’s just my taste or even my current mood. It is always a risk, especially with the small galleries, the rental and artist run spaces.

I wanted to get back to my routine of visiting a couple of small galleries and writing a review of some or all of the exhibitions; regular readers will be aware of a gap of several months this winter without any reviews. Yesterday this became a desperate search for some art worth writing about.

Sometimes I am looking for a gallery that I haven’t visited before but recently I have been missing all of the galleries that have closed or moved to new locations. There are only two galleries left on Gertrude Street: Seventh and This Is No Fantasy. A decade ago there were seven, which is why there is Seventh Gallery.

Jen Mathews, A self-tormenting grinder that is no doubt enjoyable, 2017 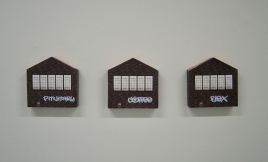 At Seventh in Gallery Two, Joe Gentry and Jen Mathews exhibition; “skyscraper, school, shrine, slaughterhouse” looks at the power and inherent violence in architecture. It is a good idea and it can almost be seen in Jen Mathews’s substantial mixed media assemblages and Joe Gentry’s paper warehouses and houses with graffiti on their walls.