The statue wars of 2017 sprang to prominence in the USA although the debate had been going for some time. Around the world people have been asking what to do with these monuments to evil men, from Cecil Rhodes in South Africa to General Robert E. Lee in America to John Batman in Melbourne. The debate about these statues has often been furious, ill-informed and poorly reasoned; so more of a war than a debate. However, if I have learnt one thing from it is that the greatest educative value that a statue can have is when it is being torn down.

I doubt that statues on pedestals are the right thing to erect but then people have been making that observation for over a century. Back then the craze was for putting up these same statues and it was called ‘statuemania’ because it was obvious that the many statues being erected were insane, not just because of the quantity but given the direction of civil society, reason and art. The only purpose in putting something on a pedestal is to worship it. The great man theory of history is not taken seriously by historians any more but some conservative groups still think that a statue will do something worthwhile.

Many people in the debate were confusing, deliberately or idiotically, the monuments with the history that they were commemorating. If tearing down statues is some kind of ‘Stalinist revisionism’ (as a reason-retarded Prime Minister Malcolm Turnbull claimed) attempting to rewrite history then what were the US troops doing with that statue to Saddam Hussain in Bagdad? In Melbourne this year the controversial statue of John Batman was taken down by a property developer to redevelop the site; I doubt that motives were revisionist or that the statue will ever be permanently installed anywhere.

Do the sculptors who made these care about the fate of their statues? Not beyond the final payment; if I have learnt one thing about the kind of people who make these statues is that they are professionals.

Should these statues be preserved for the sake of their artistry? Ha ha… you were making a joke?

Moving on the next question is: what to do with these empty plinths that the statues leave behind? Consider London’s Fourth Plinth in Trafalgar Square or, for a local example, Plinth Projects in Edinburgh Gardens.

Outside the St Kilda Town Hall there is this ‘monument’. Just as you thought it must be meaningful with the man, the airplane and the classical temple turns into crazy snake fun. Made of cast bronze, the sculpture and its large plinth is ironic in its content, materials and form. Local artist Richard Stringer’s Monument for a public building, 1994, turn the form of the monument into self-referential postmodernism. 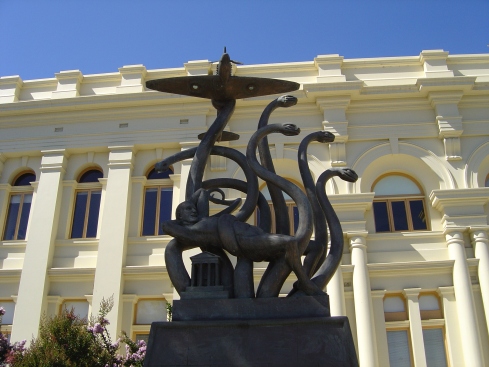 Writer, independent researcher and artist, Mark Holsworth is the author of the book Sculptures of Melbourne. END_OF_DOCUMENT_TOKEN_TO_BE_REPLACED
This entry was posted on Wednesday, October 25th, 2017 at 11:05 AM and tagged with General Robert E. Lee, John Batman, Malcolm Turnbull, Melbourne, memorial statues, removing statues, Richard Stringer, St. Kilda and posted in Public Sculpture. You can follow any responses to this entry through the RSS 2.0 feed.
« Friday night @ Off the Kerb
A shadow of a memory »