It is called the National Gallery of Victoria for obscure historical reasons but it is the nation of Australian and Australian nationalists that are at the core of the problem. The protest at the NGV over Wilson Security demonstrates a deep divide in Australia. I believe that Wilson Security along with all members of the Labor, Liberal and The Nationals parties of Australia should be standing trial for crimes against humanity in the International Criminal Court in the Hague where an appropriate and independent court of law can determine their guilt or innocence after hearing all the evidence. Others believe that Wilson Security is a legal and legitimate security contractor and that there is nothing inappropriate to their legal employment anywhere. 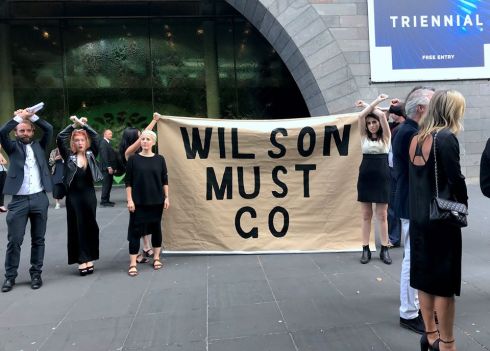 It is clear that Wilson Security cannot provide security to the gallery when they have committed crimes against humanity. They become a massive additional problem for security at the gallery. Protesters have already proved that Wilson Security cannot provide security to the gallery by colouring the NGV’s water-wall and moat blood red and veiling Picasso’s Weeping Woman. The Weeping Woman is an excellent focus for the protest because the painting is riffing on the image of woman crying in the window in Picasso’s Guernica; a painting is a protest against fascist aerial bombing of civilians on 26 April 1937 during the Spanish civil war but it could be in Yemen this year.

I am sympathetic to all the mothers and their children at the NGV Triennial. To have something adult, intelligent and free that a young child will also enjoy is a rare combination that many a parent has wished for. The Triennial has been designed with both in mind. There is even parking for strollers outside the some of the spaces and many of the exhibits are very child friendly. It is the presence of so many children which makes the presence of Wilson Security even more offensive as the company has treated children and adults in a cruel, degrading and inhuman manner. I don’t how many parents with children enjoying the Triennial would have seen the horrible irony that a company that treated children and adults in a cruel, degrading and inhuman manner was providing security for the gallery. Some of them would believe in three word political slogans and send their own children to schools run by organisations with a history sexual abuse.

Three artists in the Triennial; Rafael Lorano-Hemmer, Richard Mosse and Candice Breitz have signed a letter of protest. Breitz and Lorano-Hemmer renamed their works in the Triennial to Wilson Must Go and Mosse found another way to incorporate his protest into his video work. I cannot accept that a company that has committed crimes against humanity in running the concentration camps on Naru and Manus Island for the Australian government should be employed by an art gallery and would join with Lorano-Hemmer to encourage others to consider making a donation to: http://riserefugee.org/ and https://www.asrc.org.au/.