In Brunswick there is a pedestrian footbridge that crosses over CityLink Tullamarine Freeway between Peacock Street and McColl Court. The bridge is adorned with 24 cast concrete faces. In 2017 a couple of newspapers reported on it under the headlines: “Brunswick’s creepy bridge – 25 concrete faces, not one nose and no one knows why” and “Creepy concrete faces appear on Brunswick bridge”.

When I saw it on the news the artist who made the masks was a mystery to me (and I am trying to be an expert in the limited field of Melbourne’s street art sculpture) but one that I didn’t have time until now to investigate. Now that I have it is the paranoid reaction and the lack of any memory in suburbia that are the most disturbing elements.

What caused this paranoid reaction? Was this reaction just because a local graff writer, the prolific tagger Felon had decorated one of the faces, death metal style or was it because of the absence of a plaque to identify the art? I’m not surprised that the noses are all gone, it is the first thing to be damaged on a sculpture and it gives the masks an antique feel.

The propensity for paranoia in suburbia is no reason for alarm. A mystery has to have an element of danger and intrigue or it wouldn’t be mysterious. However, once the facts are revealed it generally turns out to be not that interesting, perhaps even mundane, like a pizza restaurant in Washington DC.

The following day The Age reported that it was the work of Melbourne artist Mary Rogers who “sculpted the 25 life-size faces in her home studio in the mid-1990s as part of the Freeway Bridge Project.”

The work combines architectural decoration on brutalist concrete and was intended to help humanise the freeway overpass. The masks were cast from local residents but, after twenty years, this has not given the bridge any local context or memory. The lack of any urban memory of the bridge speaks of the transitory nature of the urban life. 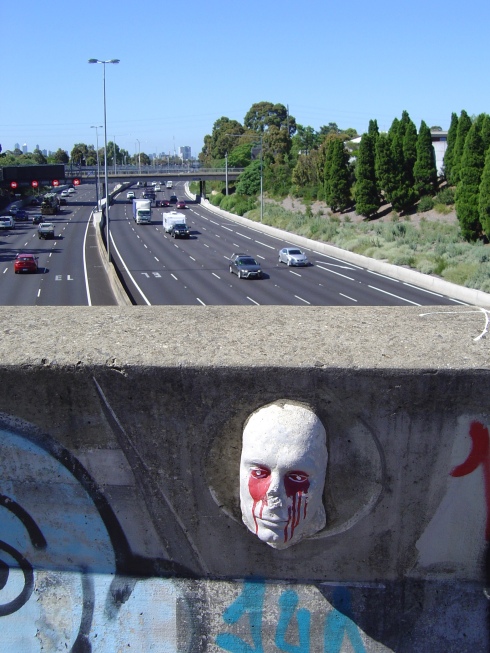 Writer, independent researcher and artist, Mark Holsworth is the author of the book Sculptures of Melbourne. END_OF_DOCUMENT_TOKEN_TO_BE_REPLACED
This entry was posted on Tuesday, January 9th, 2018 at 12:03 PM and tagged with Brunswick, Mary Rogers, The Age, Tullamarine Freeway and posted in Public Sculpture, Street Art. You can follow any responses to this entry through the RSS 2.0 feed.
« Habitat Filter in Southbank
Art or arts? »

3 responses to “Footbridge of Masks”