Gorilla carrying off a woman

I thought that I should look closely at something that I hate; Emmanuel Frémiet’s Gorille enlevant une femme (gorilla carrying off a woman) 1887, a bronze sculpture. It won a medal in the Paris Salon of that year. Most people in Melbourne, or Montreal or various other cities would be familiar with Frémiet’s Jeanne D’Arc. In Melbourne it stands, in a strange pairing, with Boehm’s St. George outside the State Library. 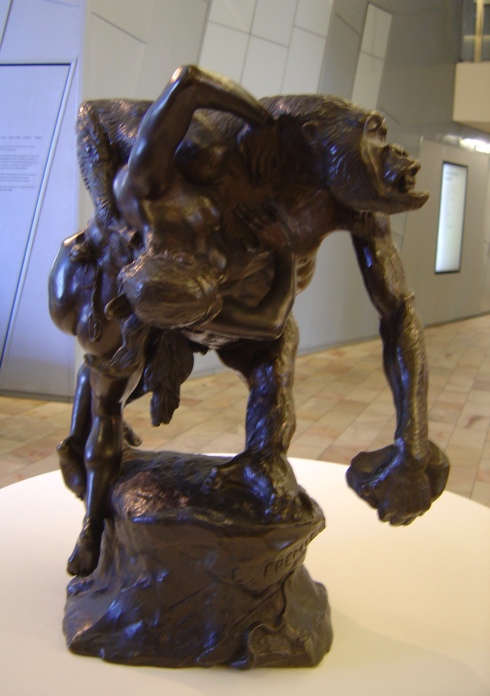 Frémiet was a nineteenth century French sculptor who specialised in animal sculptures. I find some nineteenth century sculpture ridiculous; man’s battle with monster from his unconscious that is, in retrospect, in the post-Freudian world, so obvious. But Frémiet’s sculpture is far worse than any sexual fantasy because this isn’t simply a prototype King Kong. The ape is carrying a stone hand axe. The ape as primitive tool maker means that this sculpture is perpetrating the ugliest of racist stereotypes. Along with the idea of women as property that foreigners want to steal.

The primeval scene is not referencing classical or biblical mythology but a fantasy of pre-history. It is the kind of thing that you might expect on the cover of one of an old Tarzan books from the 1960s. It is not the kind of image that art galleries collect today. If you tried to sell that kind of shit today there would be a campaign to put a stop to your business because it is both racist and sexist.

There is a snake disappearing under the rock. The obsessive details and the quality of the modelling are enough to save the work but not enough to keep it out of storage at the NGV where I hope it spends most of its time.

Fantasy art and visionary art are now considered as a separate category to serious art but Frémiet’s Gorille enlevant une femme is a reminder that this was not always the case. Fantasy art uses broad metaphors, if they are metaphors, and not symbols or icons. It makes me wonder if the change of art styles in modernism was about a change in meaning expressed than in an outward appearance. The rejection of works like Frémiet and what they meant and resulted in art searching for a different meaning and look. Modernism was about looking for a new subject and not a new way of depicting an old subject.

If I were to write such a grand history of art I would write about the crisis of meaning that lead to modern art. ‘Meaning’ is a word that could encompass all those fuzzy words like ‘spirituality,’ ‘truth’ and ‘beauty.’ For there was a crisis of meaning in European art due to increasing reports and evidence of death of the one, true God; the same God that was meant to be the foundation of European culture. Meaning in art and the meaning of art started to crumble and the obvious racist fantasy presented in Frémiet’s Gorille enlevant une femme is now best seen as evidence of this disintegration. The patriarchy and its ugly irrational racism in bronze.

Writer, independent researcher and artist, Mark Holsworth is the author of the book Sculptures of Melbourne. END_OF_DOCUMENT_TOKEN_TO_BE_REPLACED
This entry was posted on Monday, January 29th, 2018 at 12:15 PM and tagged with Emmanuel Frémiet, fantasy art, NGV, racism, sculpture, sexism and posted in Art History. You can follow any responses to this entry through the RSS 2.0 feed.
« Street Art notes January 2018
Melting into Movement @ Counihan Galler »

One response to “Gorilla carrying off a woman”