Not every Indigenous person who goes to prison is an amazing artist and far too many Indigenous people are going to prison in Australia. Far too many, land rights activist Noel Pearson’s claim that Indigenous Australians are ‘the most incarcerated people on the planet Earth’ is an accurate claim according to the best available data; well over five times the rate that African–Americans are jailed. And you don’t have to be an amazing artist to do worthwhile art because something that is worth doing is worth doing. Even a first painting by a prisoner, like Ricky W trying to connect with his culture.

Last year 130 Indigenous artists filling the walls of the St Kilda Town Hall Gallery; this year the annual exhibition by The Torch is even larger. With almost 200 work of art in the annual Confined 9 exhibition there is a great variety in quality and styles. There are some exceptional paintings including works by Bex, Daniel Harrison, Ray Taplin, and Robby Wirramanda. Gary Wilson Reid’s painting Wati Ngintaka Story is an intense and dynamic image from a traditional Pitjantjatjara/Yankuntjatjara story. 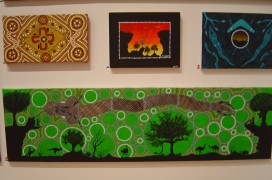 So if you think that Indigenous art is all about dot painting then this exhibition will show you there is a lot more. There isn’t one homogenous, big dot of Aboriginal culture, but hundreds of cultures, each with its own traditions and motifs. There are the sunset silhouette landscapes influenced by the Carrolup (Noongar) Art Movement and plenty of art combining traditions.

There is also wood carving, textiles, baskets and ceramics. And an awesome three storey model house Shane J’s Dream House. The house, like a lot of the art, shows what awesome things can be done with persistence, dedication, 5,500 paddle pop sticks, and 4,950 matches.

The Torch is an organisation that supports Indigenous offenders and ex-offenders by running an Indigenous arts in prison and a community program. It works with hundreds of prisoners in fifteen out of the seventeen Victorian correctional facilities and it continues to work with them after they are released, providing career and in-community support. One focus of The Torch’s program is in assisting Aboriginal prisoners to emphasise a professional approach to art. But the most important part of The Torch’s program is that it is teaching cultural learning and cultural strengthening, which help the prisoners reconnect with their culture. Aboriginal prisoners didn’t want art classes about how to draw or mix colours; what they wanted was to learn more about their own backgrounds and country. They wanted to know about their culture. They wanted to know their totem animal, consequently there are many paintings of turtles from Yorta Yorta people.

There is parallel exhibition, Dhumbadha Munga – Talking Knowledge on at the Eildon Gallery at Alliance Française in St Kilda of the art by the Torch’s arts workers and ex-offenders who have continued an arts practice. Such an exhibition is a necessary part of their professional development so that they can still be practicing artists. The Torch’s founder and CEO Kent Morris’s exhibited two art photographs of natives birds. These are not the kind birdwatchers take yet his carefully constructed images originate with the artist “walking on Country.”

Writer, independent researcher and artist, Mark Holsworth is the author of the book Sculptures of Melbourne. END_OF_DOCUMENT_TOKEN_TO_BE_REPLACED
This entry was posted on Saturday, February 17th, 2018 at 11:34 AM and tagged with aboriginal art, Alliance Française, Gary Wilson Reid, Robby Wirramanda, St. Kilda, The Torch and posted in Art Galleries & Exhibitions. You can follow any responses to this entry through the RSS 2.0 feed.
« Louise Paramor @ NGV
No Face by Sunfigo »