I’m keeping my eyes open. I’m looking around. I have not got my face fixed on the screen of my mobile phone as I walk so I notice things on the streets of Brunswick and Coburg. Anarchist posters with anti-religion and anti-fascist graphics and all the beautiful aerosol works down the bluestone alleyways. 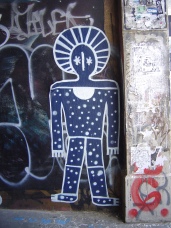 I hope that whoever is doing the Wandjina spirit in paint, paste-ups (and now in ceramics?) has the cultural authority to use the sacred image. That they are an Mowanjum person from the Kimberley and not some Europeans living in the Blue Mountains, as in the 2017 controversy over the use of the image of the Wandjina spirit. But then this is the street and nobody is meant to know.

A piece by Discarded along the bike track is less obvious. I can’t be sure that I haven’t overlooked this piece for a year or more. The cast ceramic pieces of discarded items found on the street are collaged together into a new form. The piece is framed by the better brickwork outside the patch. I am keeping my eyes open as I quickly photograph the piece to avoid being run over by a bicycle when I kneel down.

Sometimes it is so obvious that you only have to be there. I see Civil behind a row of orange bollards, half way up another wall in a Sydney Road carpark. He is painting another scene of stick-figure people, dogs and bicycles with a brush. The description of stick-figures sounds crude when the practiced lines of Civil’s figures is anything but crude. They have the simplicity of a figure by Keith Haring or Matisse. The curved  lines arms and active legs along with the simple details of hats, dresses and bicycles.

I saw a lot of new Civil walls for it was only an hour before that I’d noticed that Civil has repainted his old wall in Tinning Street with more of his stick figures but this time against a bright green background. For more on Civil read my earlier post. 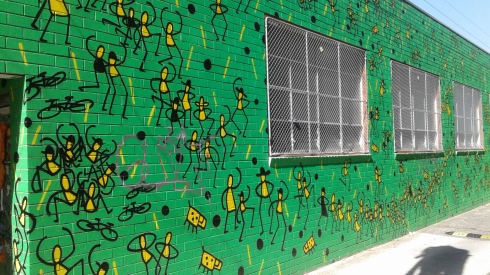 Another wall by Civil in Brunswick

Keeping my eyes open in Brunswick had its visual rewards. 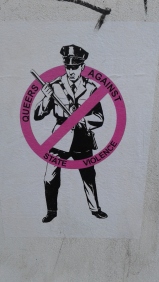 Writer, independent researcher and artist, Mark Holsworth is the author of the book Sculptures of Melbourne. END_OF_DOCUMENT_TOKEN_TO_BE_REPLACED
This entry was posted on Saturday, April 21st, 2018 at 3:57 PM and tagged with Brunswick, Discarded, Inspector Gadget, Street Art, Tom Civil, Wandjina and posted in Street Art. You can follow any responses to this entry through the RSS 2.0 feed.
« Synthesizers at Grainger Museum
Taree Mackenzie @ Neon Parc »

2 responses to “Eyes open in Brunswick”