The End of Modernism

The death of Tom Wolfe reminded me that amongst his many publication Wolfe wrote a short book about modern art, The Painted Word. The blurb on the book’s cover sums it up. “Another blast at the phonies! – The author of the The Electric Kool-Aid Acid Test exposes the myths and men of modern art.” In the end Wolfe’s predictions about the future of art were wrong; modernism did not have a hard landing and the art critics are not more famous than the artists.

Modernism was over by the time that The Painted Word was published in 1975. Modernism was not a fad, it was not a fantasy that was sold to the world by con artists or imposed on it by dictators. Rather it was a reasoned, articulated theory supported by empirical evidence. This doesn’t mean that it was right only that the conservatives own position of royalism, nationalism and tradition was less reasoned, articulated and supported by evidence.

Wolfe’s, and other conservatives, aversion to the ‘theoretical’, the “word” in his “painted word” is a conservative reaction to any explanation other than his own (and I use the masculine pronoun here deliberately). They assume, that ideas and words spring straight from the world into their mind and concocted ‘theories’ are corrupting influences on this allegedly natural state. In this way the ‘theoretical’ could spoil your enjoyment of art or life as if theories are like a vampiric thoughts sucking the joy out of living through understanding.

Ironically (and irony is his middle name) the great debunking of modern art had already been done by Marcel Duchamp. However, the vitriol that the conservatives have for Duchamp blinds them to this and, because Duchamp’s attacks were a kind-of pre-post-modern deconstruction of modern art, rather than by defending traditional values. It was Duchamp’s critique, rather than the conservatives, that laid the grounds for the end of modernism.

However, instead of a total collapse of modernism, as the idealism drained from the market modernism had a soft landing. This was facilitated by changes in the technology that allowed greater growth in popular culture: television, portable music technology, internet, etc. Music on demand used to be the high point of culture available only to the very rich; now everyone has the ability to listen to music or watch videos any time and anywhere and private tastes can be developed without the approval of friends or family multiplying the market for the arts.

This meant that the domination of the state art institutions and funding by ideological forces during the later part of the Cold War was rapidly and successfully short circuited by artists who reached a mass audience through popular media. The popular arts provided an economic way to bypass the moribund system of academic/institutional arts grants until the academic/institutions adapted to the post-modern world.

The idea of an ideological domination of post-modern thinking is an absurd misunderstanding of a decentralised non-hierarchical system. Few of the leading contemporary artists paint and most of them use aerosol paint cans. Tom Wolfe is dead but his attitude that modern art is a con is still an article of faith amongst many conservatives.

Hosier Lane has changed and will continue to change, it has also stayed the same. The homeless are still in Hosier Lane, seeking shelter around the corner in Rutledge Lane. There are still people doing graffiti in the lane, residents who live in buildings and the workers in the businesses but mostly there are the tourists, local, interstate and international tourists. Hosier Lane is an established part of the Melbourne tourist experience.

From the instigator, Andy Mac moving out of his laneway apartment to draconian anti-graffiti legislation and the threat of installation of CCTV there have been many predictions that the lane would cease to be a successful street art zone. However no-one predicted that the lane would be killed by its own success. What did you expect from street art and graffiti’s aim for mass appeal?

Now many street artists and graffiti writers are complaining that the lane is being destroyed by tourists. There were always tourists who visited the lane but now there are more tour groups and individual tourists than ever before. Tourist attraction are the Kali Yuga, the fourth stage of the world.

There always was developments and building in the lane but now the Culture Kings shop is ripping a hole in the middle. At least we spared it overshadowed by a massive tower, yet another of its predicted demises; Keep Hosier Real.

It has long been an established photo location for bridal, fashion, advertising and selfies but now it is difficult to even walk up it because of the number of cameras pointed across the narrow lane. Every metre there is someone posing for a selfie next to its walls thick with aerosol paint.

Melbourne’s great graffiti location has become crowded with tourists, tour groups all day, every day. There always were tourist in Hosier Lane, often they were on ‘spraycations’, visiting graffiti writers and street artists from around the world had long contributed some of the graffiti in the lane. However, now there is tagging on pieces by people whose handwriting demonstrates that they have no idea of graffiti or its etiquette (do not tag on a piece).

It long ago ceased to be the best place in the city to see street art and graffiti but the tourists don’t care. They are too busy taking photographs of each other in front of its walls. It doesn’t matter that the quality of the painted walls because the focus of their cameras is on the tourist and not the walls. Although it once was sufficient to see Hosier Lane to understand the vibrant scene; seeing or painting in Hosier is no longer necessary for the survival Melbourne’s street art and graffiti.

One obvious benefit that Hosier Lane still provides is that it is an example to every local council and business as to what a success that a graffiti and street art zone can have in the centre of the city. One of the more surprising recent changes is that along with the tourists there is more protest art in the lane, for more on that see my Political Graffiti in 2018. I have been watching and reporting on the development of Hosier Lane for over a decade and I intend to keep on. 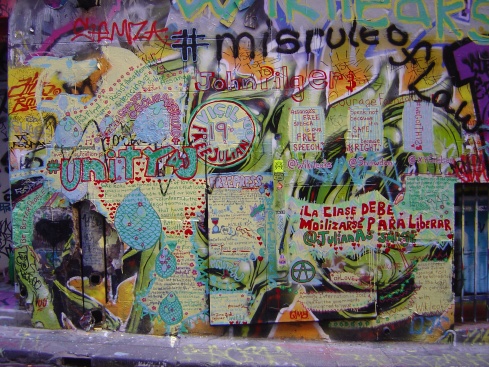 Three sentence reviews of four exhibitions in Melbourne’s Nicholas Building, where there is always more than you expect to find. 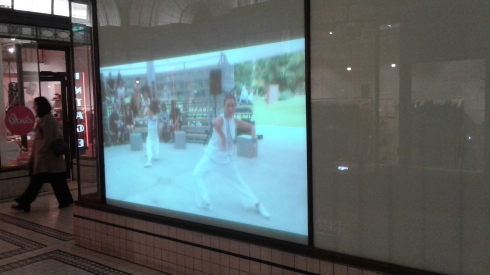 A video loop of a site-specific performance piece by two dancers, Briarna Longville and Elise Drinkwater using jewellery by jewellers Ruby Aitchison and Annie Gobel. One of the necklaces of made of metal strips is on exhibition along with the video. At times it looks like puppetry of necklaces, at times a fashion parade but the work does succeed at a hybrid event.

The empty experience of missing the building next door which has been demolished to build the Metro tunnel. The absence is made visible by some sheets of acrylic with minimal images printed on them. Some of the sheets of obscure the window that looks out on the demotion site, one is on a trolley and another is out in the corridor.

“Unfathoming” suggests a reduction in depth and this witty little works by a clever artist  plays on shallowness. In his Manifest density (2018) various glasses have been melted down and poured into a mould made from the negative space of the glass. I could have lived without so much text accompanying the exhibition; the work spoke to me more than the printed words.

Painted bronze hanging on the wall, a high art materials meets slacker art attitude in a dull resolution. Dumb doodling with a square of wax that was then cast in bronze and then painted. The Reading Room is a beautiful gallery space occupying one corner of the sixth floor.

Sorry for not writing about street art and graffiti as often as I once did in this blog. This is partially because of the conservative direction that Melbourne street art has taken. I don’t like murals. I love the smallest pieces.

I enjoy street art sculpture and I keep finding the odd piece around. The sculptural elements that Kambeeno has been adding with his paste-ups; love bombing can be read so many ways. Kambeeno also represents a new wave of political paste-up artists spreading their message of peace, love and understanding on Melbourne’s streets. 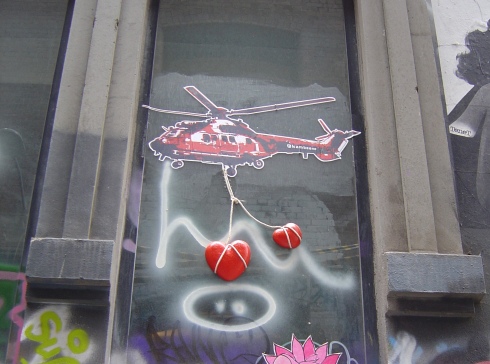 I still see the graffiti pieces flash past my window on the train or on along the freeway noise barriers. It is amazing the speed at which the human mind can take in an image but it is hard to stop to take a photograph. In Chinatown I saw some well placed paste-ups by LA street artist, Pike 169 TCF. 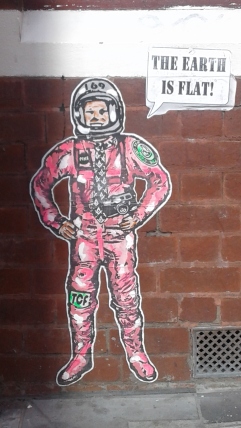 I have been watching and reporting on the development of Hosier Lane, along the Upfield Line or in Presgrave Place for over a decade and I intend to keep on doing that. Only, apart from Hosier Lane becoming packed with more tourists, there hasn’t been much to report. Some of the same people are still putting up pieces; Phoenix is still active in Presgrave Place. And the new people are putting up some of the same old stuff, including a return to stencils. 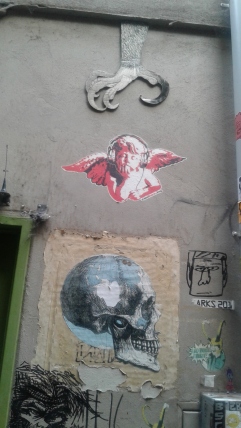 Phoenix, Kambeeno and others Presgrave Place 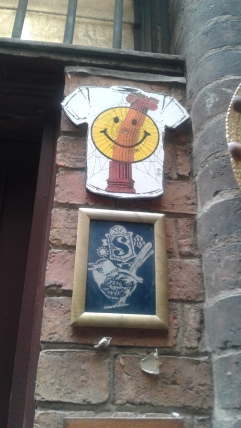 Street art continues to address the important issues of our times; currently the number of women murdered by men. I saw this series of stickers in Fitzroy and I fact checked them before sharing them.

The Hotel Windsor opened in 1883 on Spring Street; a grand nineteenth century hotel that has survived into the twenty-first century. For four days at the start of August it was used as the venue for an alternative art fair. A hotel as setting for an art fair is not an original idea; it started with the Gramercy International Art Fair at Gramercy Hotel in New York in 1994 and has been replicated in several other cities. 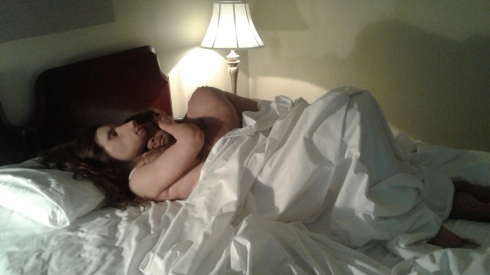 The Melbourne Art Fair has returned after a four year absence but I didn’t have the time or energy to spend a whole day looking at forty galleries stands. Nor did I want to go to The Other Art Fair in Kensington because I had been to it last year. Surveying twenty-four galleries in the attractive and comfortable surrounds of the Windsor suited me better.

There were major commercial galleries from Melbourne, NSW, SA and NZ on all of the Windsor’s four floors displaying their art in most of larger suits of rooms along with some smaller rooms. Sharing rooms with Fort Delta was Dutton from New York.

Video art was on many of the tvs in the rooms. The setting of the hotel was more intimate and you could see what the art looked like in a furnished room rather than an unfurnished gallery. Standing in a bedroom with gallery staff encourages more conversation. Some of the smaller galleries were also using the space for both exhibition and accomodation.

The Project Room: In Bloom was curated by Madé Spencer-Castle and Jeremy Easton was the best smelling art space that I’ve ever been in thanks to the flower arrangement by Cecilia Fox.

There was an unofficial competition to have the best display on a bed or in a bathroom. My own award for best bathroom goes to Arts Project Australia which was full of ceramic snakes and sharks. My own award for best bed goes to Roslyn Oxley9 Gallery with a couple of Patricia Piccinini creatures in bed and an honourable mention (if those are the right words) to Mars Gallery for an impressive Simon Pericich work with bondage themes. The tower made of bales of hay in Bowerband Ninow, a NZ gallery, was a surprise but unfortunately nothing more. 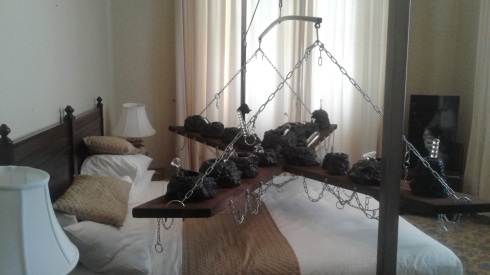