Julian Opie’s art is cool. It seems essential to his aesthetic. Feeding back from his cool is Opie’s association with pop music. He did the cover the of Blur: the best of (2000) and LED images for U2’s Vertigo world tour (2006). 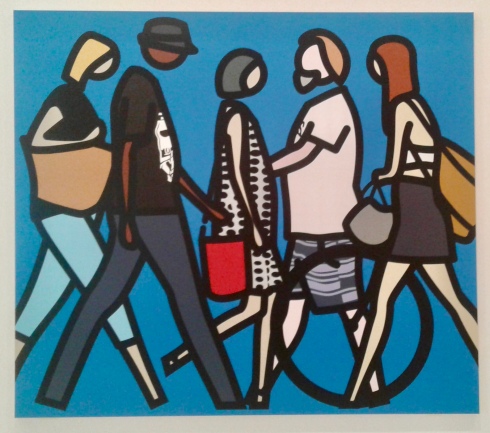 There isn’t much to his images. Each has been reduced to the essential lines and shapes. The images are refined to minimise details. They are refined again in their manufacturing. Vinyl on wooden stretcher or laser cut anodised aluminium; processes that doesn’t leave a trace of the human hand.

From the LED displays of people walking in the forecourt to the fish swim across the NGV’s water wall entrance; the self-titled Opie exhibition leads the visitor into the two galleries of his work and onto the NGV Kids part. The NGV Kids interactive part was designed in collaboration with Opie; do your own portrait in the style of… 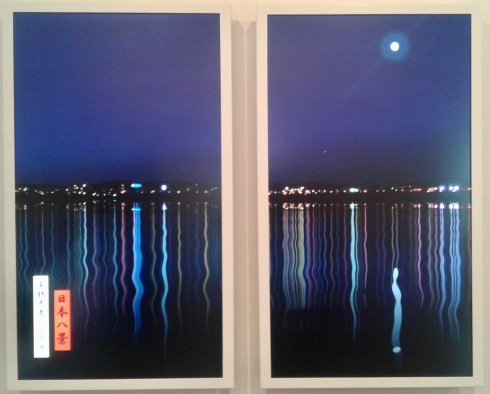 In the exhibition there is a respectful bow to Japanese art in his View of Moon over Manatsuru peninsula, 2007. Two LCD screens replace the traditional byōbu folding screens of rice paper but the format of the composition is the same. The lights reflected on the rippling water, the flashing lights of a plane flying in the star light sky, the moon still in the sky. There is something cool about refining kitsch lighting-feature landscapes; falling just short of being vacuous, insipid and vapid is cool.

Who are these people walking, running, jogging, dancing in Opie’s art? Faime, Marrie Teresa, Bruce and Sara? …Oh, and there is Julian in a t-shirt. There are two works titled: Walking in Melbourne 2018. I do a lot of walking in Melbourne; maybe I could be one of the people in the picture, maybe not.

The people are the same as Opie’s sheep or minnows. His landscapes, even when of a specific location, are generic enough to be anywhere. It is not great art but they are cool.

Writer, independent researcher and artist, Mark Holsworth is the author of the book Sculptures of Melbourne. END_OF_DOCUMENT_TOKEN_TO_BE_REPLACED
This entry was posted on Saturday, November 17th, 2018 at 8:09 PM and tagged with Julian Opie, Melbourne, NGV and posted in Art Galleries & Exhibitions. You can follow any responses to this entry through the RSS 2.0 feed.
« The Crystal Cave
Carrot Man »