Even if his name is not, Adrian Mauriks’s public sculptures will be familiar to many Australians. As they are in every major Australian cities — in Melbourne, there are sculptures in the Docklands, in Laverton, and Richmond.

From multimedia installations to spiky, monumental forms and then curving smooth white biomorphic creations; Mauriks was a prolific artist who kept on developing his art rather than reproducing the more of the same kind of works.

Influenced by Arp Mauriks’s white curving sculptures with their organic forms were surrealist without being pretentious, for this was not surrealism of hyperreal dreams but the poetic totems. Landscapes of surreal white gardens with gateways and organic growths. Maurik’s Silence, 2001, commissioned by MAB Corp for Docklands, New Quay precinct, Melbourne is part of this later body of work.

A teenage Adrian Mauriks arrived in Australia in 1957 from Holland. He went on to get undergraduate and post-graduate degrees at the Victorian College of the Arts. Through his teaching at various tertiary institutes, including the University of Melbourne and Ballarat University he influenced many young artists. But it will be his many sculptures that will be his longest lasting legacy, a legacy that is not for an exclusive few but everyone, for people like me have never met him, but who enjoy his art.

Three Public Sculptures in the Docklands 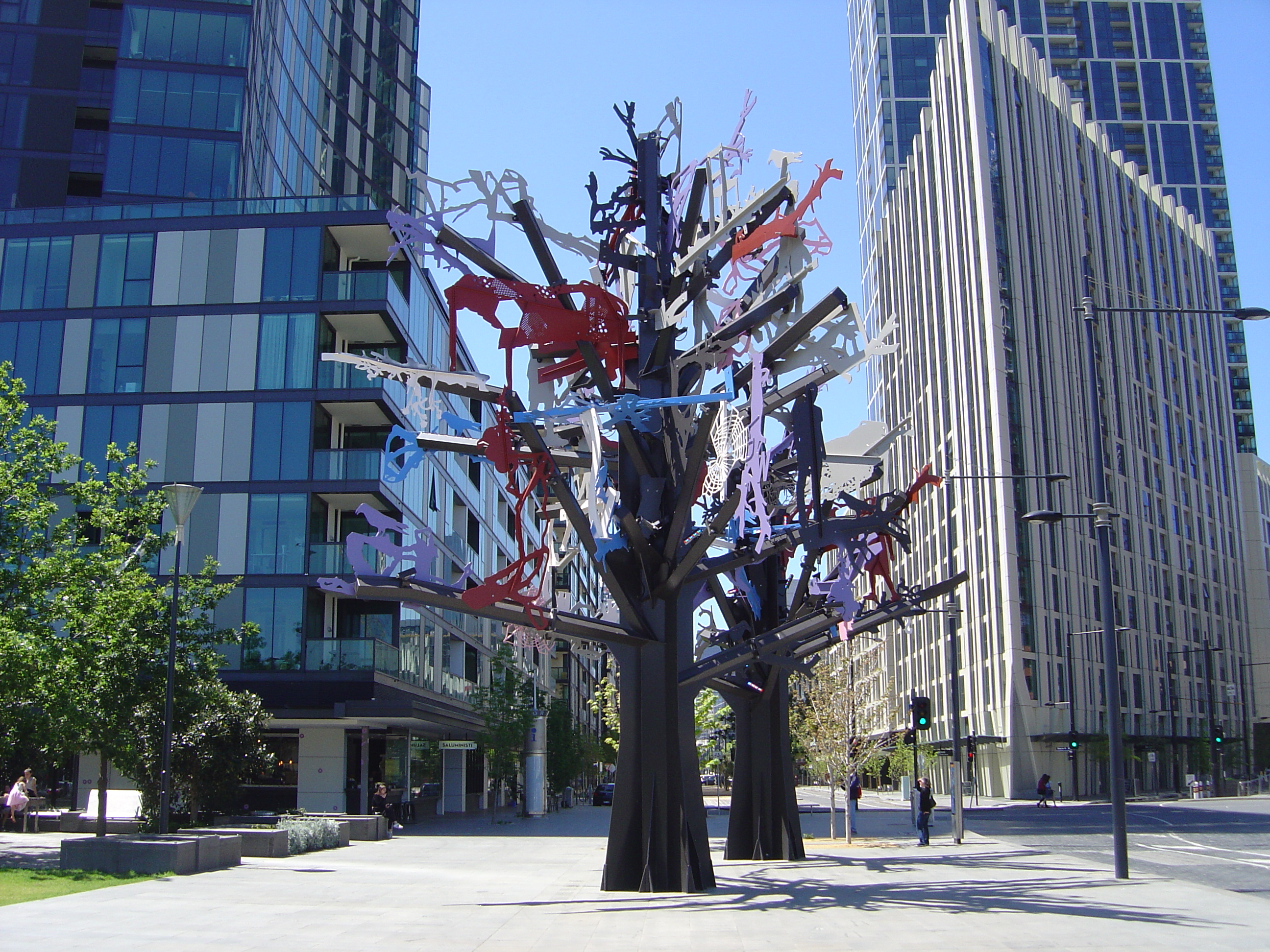 Shadow Trees by South Australian artist, Sally Smart, was installed in 2014 at the new Buluk Park and library the junction of Bourke and Collins Streets in Victoria Harbour, Docklands. Shadow Trees is both site-specific and creates a landmark for the site.

The plasma cut steel silhouettes are assembled into two large trees in a place where there have been no trees for probably a century or more. There were once many trees in that once swampy area where the river meets the bay before the Europeans arrived and chopped them all down to make docks for their ships. Now all of the trees, some of the docks and most of the ships have gone. Oddly this is not the only sculptural tree in the Docklands, there is also John Kelly’s Cow Up a Tree.

Painted pink, purple, orange, red, white, grey and black, Smart’s trees don’t pretend to be natural. However, they do appear more natural than the rest of the contrived, designed artificial area.

Trees are naturally a great sculptural form, redolent in meaning but until recently it was impossible to make at an appropriate scale. Smart’s trees seem full of stories. “The cut-out painted silhouette elements and text are open to interpretation, drawing on references from the site’s history, biology, botany, habitation, movement and language,” says Smart.

Shadow Trees tie in with Sally Smart’s gallery art works, where trees are a recurring motif. This is most obvious in her large installation, Family Tree House (Shadows and Symptoms),1999–2002. The felt and canvas with collage elements have been translated into steel for the Shadow Trees.

The shadows of these two trees links them to the text in the bluestone paving. The text is a poem by writer and cultural historian, Maria Tumarkin especially commissioned for the location. Like many contemporary sculptures it features an integrated lighting system rather than lighting as a modern addition.

Shadow Trees works well making and marking the location of a park and the Library at The Dock. For more see Victoria Harbour News. 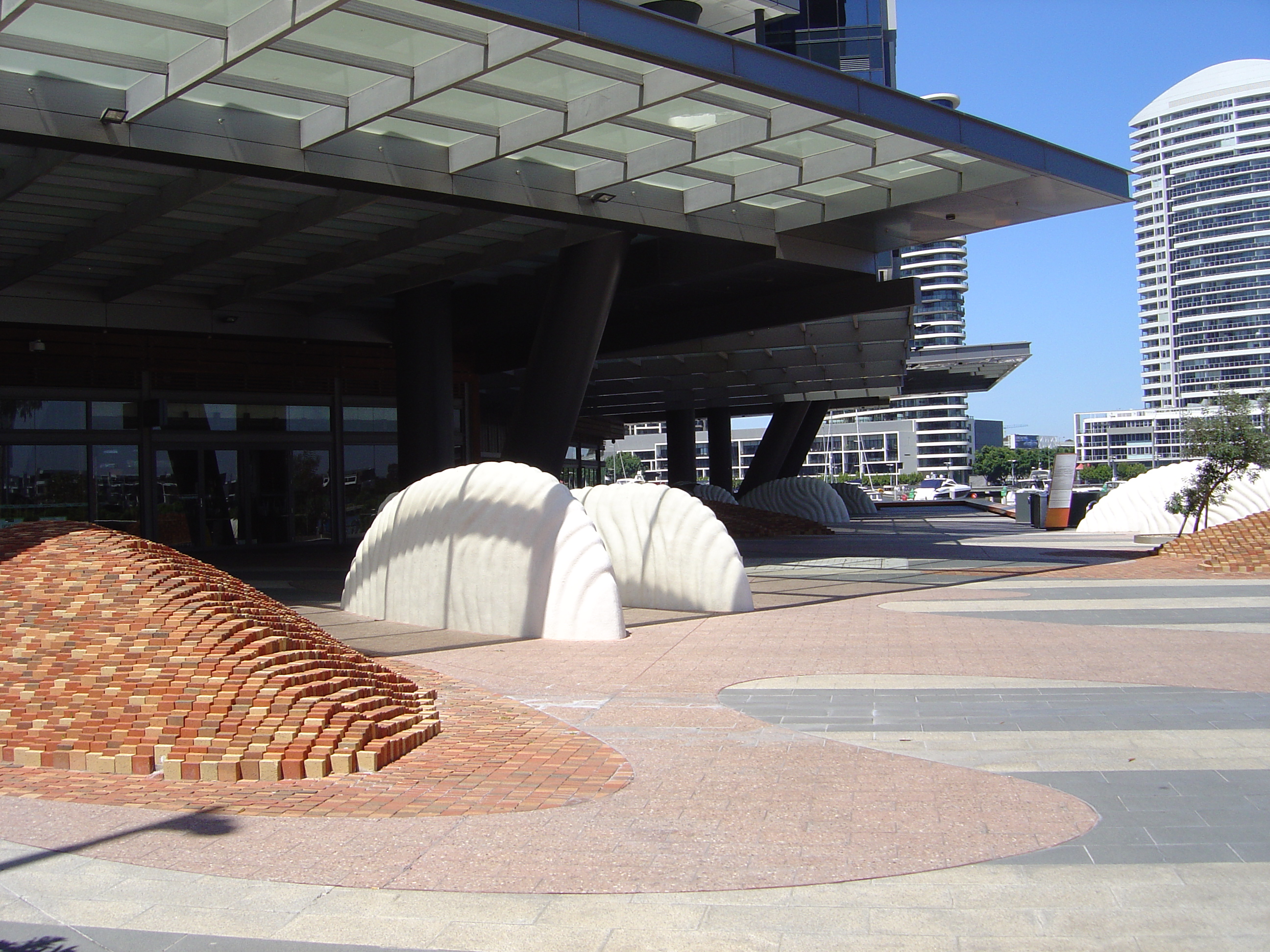 The geometric rippling piles of brick and the organic rippling carved white marble rocks or waves are scattered across this large site. There is no front to this sculpture, no perfect vantage point; to see it you have to walk around it, seeing it only in part or as a process of exploration.

You even have to explore the site to find all of the blue explanatory text panels. I have brought all the text together in one quote.

“… this site is the intersection of two axes… one reflects the city grid and its built form, the other is the original flow of the site as traced by the river and the wind… … a collision of water, wind and sun… …a composition of sculptures that creates a landscape of spaces, materials and systems… …in acknowledging the flow and timelessness of the river we may imagine the primal site… ”

The ellipsis are all Stoner’s, he is obviously a fan of ellipsis.

Stoner has other public sculptures; at the Victoria Market a memorial to the previous graveyard and another sculpture on the Geelong foreshore. His work has a monumental heavy quality that has its foundations in the location. 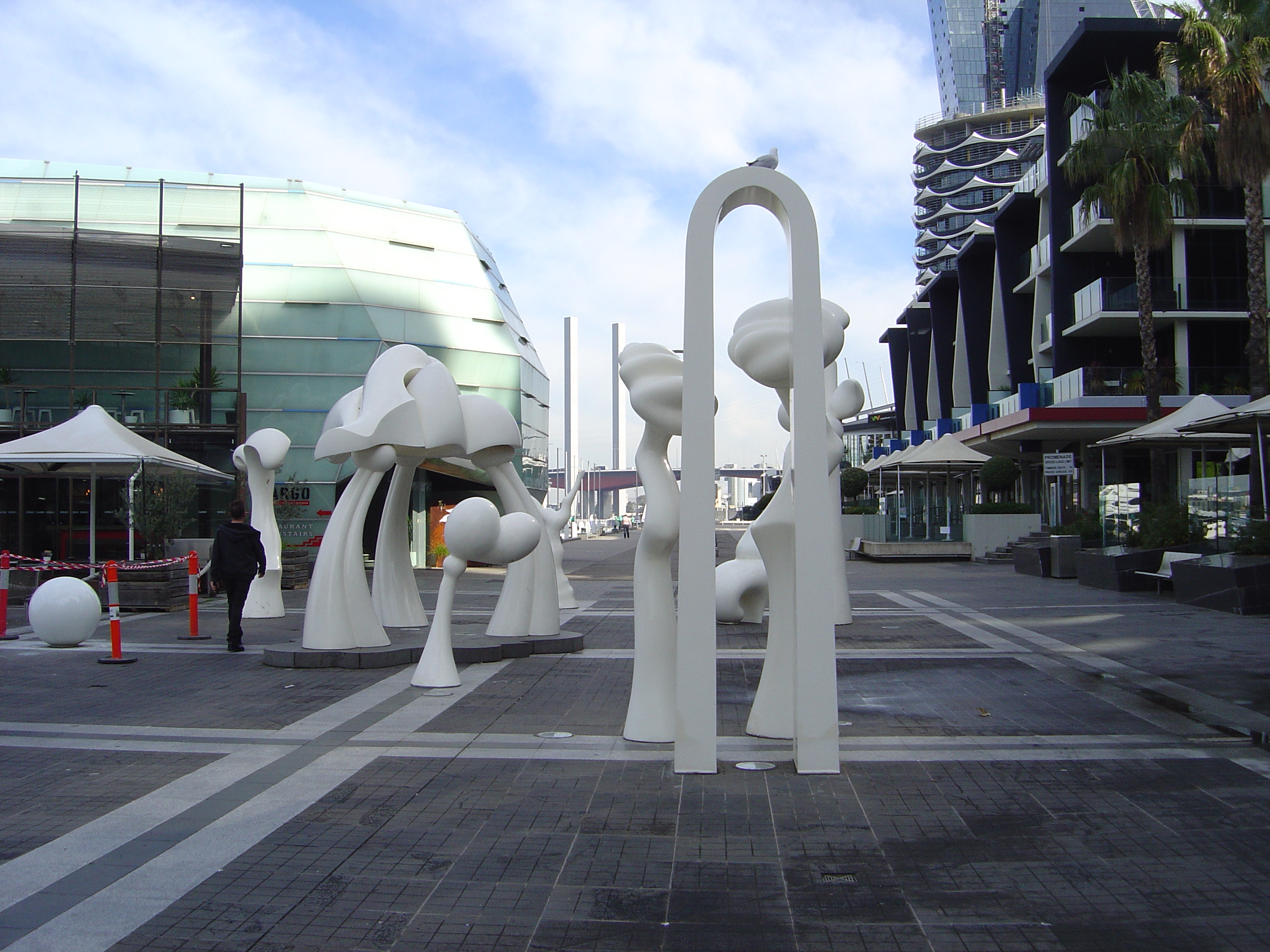 On the NewQuay Promenade in Docklands there thirteen of these curvy white biomorophic fibreglass resin sculptures. It is all very surreal, like alien lifeforms growing in the Docklands. Silence, 2001–02 by Melbourne based sculptor, Adrian Mauriks, who described it as “a series of forms arousing to the mind”. Silence is spread out across an area of 18.5 metres by 12.5 metres outside Arkley Tower. The white painted surface of the biomorphic blobs are coated an accumulation of black scuff marks from the shoes of people, mostly children, who climb on them. (For earlier public art by Mauriks in Richmond see my blog post WTF Corner.)

On the corner Punt Road and Bridge Road in Richmond there is a small park area officially called “Urban Art Area”. Nobody was using it when I was there. I’m not sure who would use it in the area – it might be all right to sit on the bench and eat lunch if you worked in the area but I doubt it. “Everywhere, there and here” comments on this park “(the angry looking sculptures aside) yet I have only seen one person ever actually sitting in the site.” Beside the busy Punt Road the little park is multi-level area and contains three sculptures.

It is the site of the former Richmond Cable Tramway Engine House that was demolished in 1991; Melbourne had several independently operating cable tramway companies prior to the current electric tramway system in the early 20th Century. The site is heritage listed for what that is worth.

Of the 3 sculptures: one sculptor appears to have disappeared, another works in a completely different direction and one has gone on to produce more significant works of public sculpture in a very different style. These are the results of this shotgun approach to public art collecting. 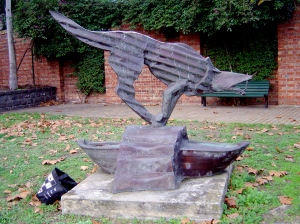 There was no information on site of name of one the sculptures – a dog, a bridge and a boat with the words “Yarra” and “Acheron” on its bow and prow. It is Anton Hasell’s “Running Red Tiger”, 1995, bronze; what appears to be a dog is meant to be an extinct thylacine or Tasmanian tiger, a carnivorous marsupial and the tiger also references the Richmond football team. Anton Hasell (Dr Anton Hasell of the Australian Bell Pty Ltd) has gone on to produce many commemorative bells notably the Australian Bell for the Australian Centenary in 2001 and HMS Beagle Ship Bell Chime commissioned by Darwin City Council. Stlg48 wrote a blog post about Anton Hasell’s exhibition at the Bendigo Art Gallery in 2010. 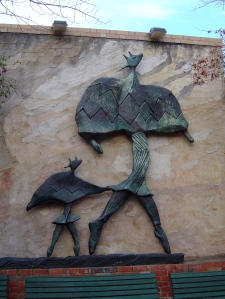 Mary Perrott Stimson’s large figurative bronze sculpture, “Mother and Daughter” 1993-94, stands out against one wall. Although intended as a friendly statement the sculpture does not help the corner. Mary Perrott Stimson has created another public statue, “Reading the News”, 2001, located in Wagga Wagga but I have not been able to find out anything else about this artist. 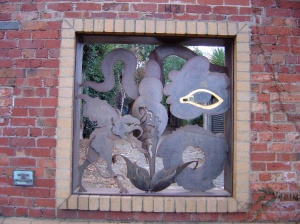 The most successful sculpture on the corner is Adrian Mauriks’ “Opus 15”, 1995, of cut steel. This surreal sculpture contains a view onto the back lane and is the only sculpture to refer to the local environment. Adrian Mauriks now mainly works on in white painted epoxy resin and stainless steel and there are examples of his work at Chadstone Shopping Centre, Docklands New Quay Precinct, Bundoora Park, and Deakin University’s Burwood Campus. There is also an earlier work of his in marble in the lawn section of Sprinvale Cemetery. Amongst his early works is a “Homage to Jean Arp” 1972, plaster, showing the Dada/Surreal influence in his work.

This little corner in Richmond demonstrates that landscaping and erecting sculptures is not sufficient to revitalize an urban space.