Biomorphic surrealism was about making things in the shape of life, often microscopic animal or plant life. Alfred H. Barr defined biomorphism as: “Curvilinear rather than rectilinear, decorative rather than structural and romantic rather than classical in its exaltation of mystical, the spontaneous and the irrational.” It can be seen in the curvy amorphous forms created by modern artists, including Jean Arp and Barbara Hepworth, Juan Miro and Salvador Dali. You might think that biomorphic surrealism was an evolutionary dead-end but it has a surprising number of ancestors, especially in Melbourne’s Docklands. 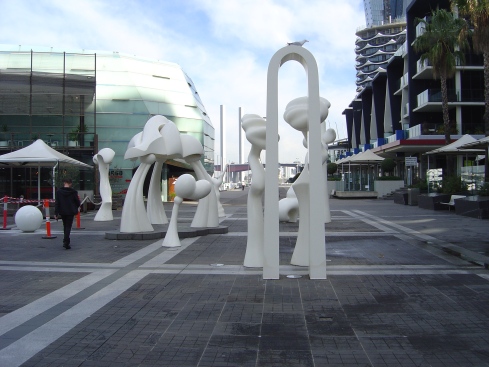 The most obvious of these is on the NewQuay Promenade: Adrian Murick Silence, 2001–02. This cluster of white sculptures are clearly influenced by Arp’s biomorphic sculptures. 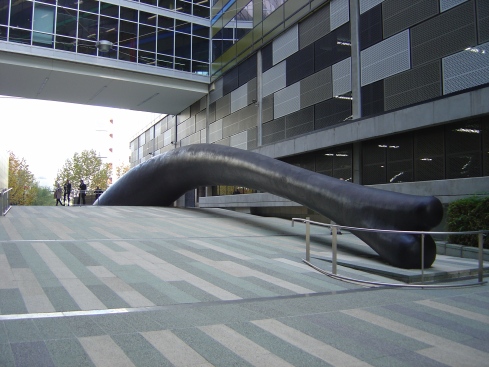 Aqualung by John Meade in 2006 is like a big black slug or an enormous tube worm with a bifurcating end that stretches through the atrium of the National Bank/Lend Lease tower at 839 Collins Street. “The counter positioning of the sculpture against the utility of the design and function of the building” (artist statement 2006) Melbourne based sculptor Meade was born in Ballarat in 1956 and has a sculpture in the NGV collection and another public sculpture, Riverside Corolla 2011, a suspended sculpture the central atrium in Southbank. 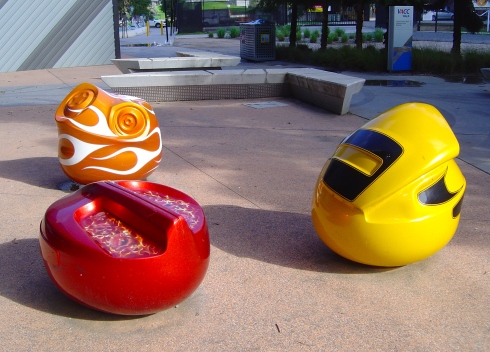 Patricia Piccinini’s Car Nuggets, 2006 are in the grounds of the Kangan Institute of TAFE’s Automotive Centre of Excellence. Piccinini is famous for her hyperreal sculptures of mutant creatures. In earlier work she made biomorphic mopeds with mirrors like antlers and I took this trio of sculptural seats to be the eggs or pupae of similar creatures. 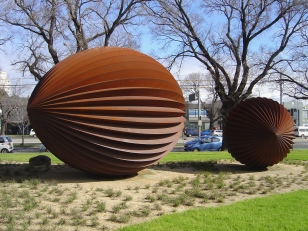 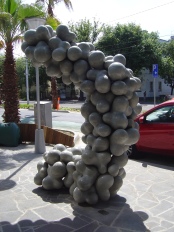 Other biomorphic public sculpture in Melbourne include Matthew Harding’s Fruition 2013 in Royal Park on the corner of Flemington Road and Elliot Avenue. And Alex Goad’s biomorphic Tethya on the corner of Fitzroy and Jackson streets in St. Kilda; Tethya is the genus of some Port Phillip sea sponges. Biomorphic forms are still a fruitful form for many Melbourne sculptors.