“What was the most unexpected reaction to your work?” A person asked artist, Paul Yore at an end of exhibition talk at Neon Parc on Saturday 18 June. 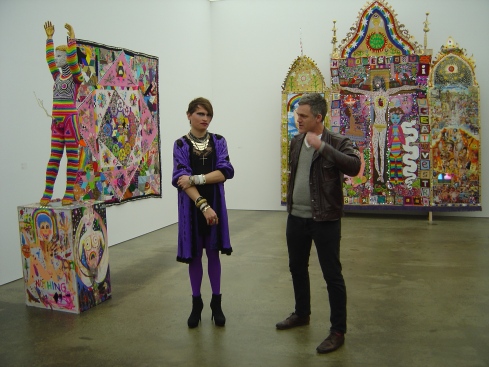 Obviously the most unexpected reaction was when the police raiding his exhibition at Linden Gallery was unexpected. Yore never expected or intended that and it remains a misunderstood event. Yore found himself caught up in an on going local political issue about funding of Linden Gallery that had been going on for years.

It was unexpected and unintended. “Nobody wants their name to be linked to child abuse forever on the internet,” Yore explained. Yore is not a shock artist; his art is too chaotic and unstable. Shock artists, like Jeff Koons and Mark Kostabi, are more precise in their intent to shock and more focused on their objective than Yore’s chaotic art. Yore doesn’t have a political objective to his art and is cynical about the individual effect of activist artists.

There was the inevitable question from the audience about self-censorship but what can you honestly say about the chill effect. What the court case did do was cause Yore to think about photography’s claim to truth and collage as an issue about truth.

After the court case in 2014 Yore went travelling across Europe looking at a lot of folk art, outsider art and junk yard art. On his return to Melbourne he started to condensed this research into an exhibition at Neon Parc. Yore told the audience that did as much as he could in the time. Time is an important feature of Yore’s work, the handmade reminds you of time, every stitch is a moment in time.

Domestic advice: to prevent your dress riding up on your tights wash with fabric softner.

Advice to artists: do not let your mother attend your artist talk unless you want the audience to hear stories from your childhood. At the end of the talk Yore’s mother tells the audience that Paul has been collecting things since he could walk.