I didn’t expect to see a painting by the Spanish Dadaist, Francis Picabia at the Art Gallery of Ontario but there it was; not from his Dada days but from the 1940s, complete with a couple of palm trees. It is like finding out that a punk band, like The Mekons have become a country/folk music group, which they have. 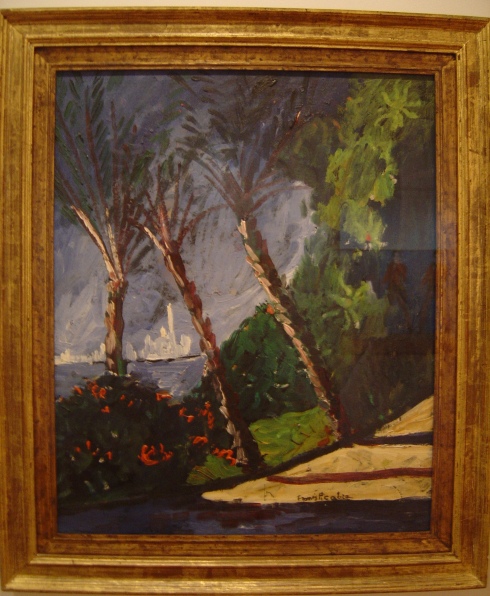 Jonathan Jones, The Guardian regular art critic, amongst others, can’t understand this scenario and complains that “a tiny but brilliantly subversive protest movement has become the common currency of big-money, mass-audience art – Dada’s founders would feel sick.”

No indication that Picabia was feeling sick, more like a holiday in the sun.

Of course, Mr Jones Dada has become mainstream. Wasn’t that always the intention of the Dada revolutionary council of Berlin? Wasn’t that the point of disseminating the information about Dada to the world? Why the publications, the lecture tours, the exhibitions, the records if it wasn’t to get the idea out there.

Every revolution that is completed becomes the establishment; every successful revolt permanently change the system. That is the process of history. It is not a betrayal of the American War of Independence, or other revolts and revolutions, to have its relics in a museum. But if you had the right sneer in your voice you could make it sound like it.

Would you, Mr Jones, argue that Dada was a success if they were being thrown out or sold in flea markets?

It is illogical to suggest that current ownership of Dada art and relics, or anything else, implies anything about its success or failure in anything other than being owned. The collections of museums, galleries and libraries are not a proof of the objects collected success or failure.

Does every utopian movement have to continue in an eternal purity of process in the same way that the church doesn’t in order not to be “trivialised or misappropriated”?

Should we rather not be celebrating the triumph of these nihilistic bolsheviks who made the contemporary art world? Where is the big Dada parade, with the figure of death in the lead and the oompah band bring up the end? A world where art is free to be anything. A world where in primary schools and kindergartens around the world children are taught the Dada art techniques like collage. Are little children’s art “trivial” enough for you, Mr Jones?

Sure we have all moved on and what was yesterday’s rebellion has now become a museum piece, we no longer wear monocles and ransom note typography is old fashioned.

Sure, Dada failed to end the war, and it has been the same imperialist war on and off for the last century, but who hasn’t failed to do that?