John Kelly’s 4.5 metre bronze sculpture, Man lifting cow was been unveiled today in front of the Brimbank City Council’s offices on W Street in Sunshine. The sculpture is part of Hampshire Road Precinct upgrades and the opening of the Brimbank Community and Civic Centre in 2016. It was made at Fundêre Foundry in Sunshine, see my blog post Progress on Man Lifting Cow. 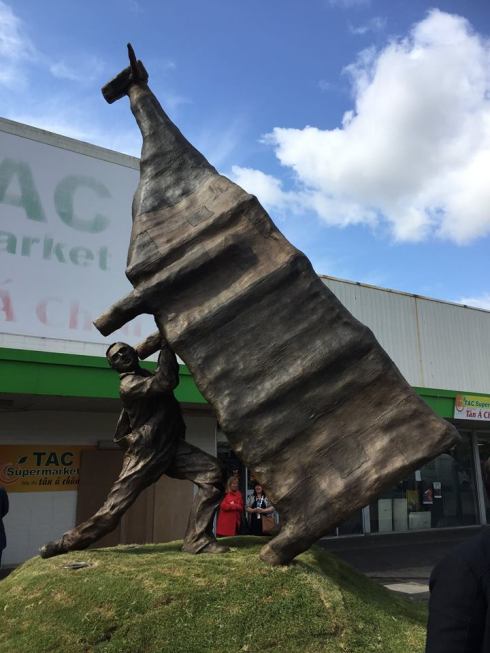 What does John Kelly’s sculptures mean?

In 1994 Kelly painted his first Man Lifting Cow I. It was an oil on linen 182.5 x 152 cm. In the middle is a man in overalls, lifting something that roughly resembles a cow. In the background there is wide brown land with low hills and a wind sock to indicate the legendary airstrip. It is a reference to a story about the artist’s William Dobell’s WWII experience.

‘When World War II broke out. Bill [Dobell] served first as a camouflage labourer, later as an artist recording the work of the Civil Construction Corps, which built airfields and other defence projects. As a camouflagist, he was one of a group of several, later famous, artists who had been ordered to make papier-mache cows and move them around the base in the hope of fooling Japanese pilots. (said Bill, “I think the authorities underestimated the eyesight of Japanese airmen”.) For almost a year he shared a hut with fellow-artist Joshua Smith.’ (Extract from Dr Edward McMahon, Unforgettable “Sir Bill” Dobell, [first proof])

Kelly has created many paintings riffing on the story of Dobell making camouflage cows. It is only a story and there is no proof that Dobell ever actually made a camouflage cow. Kelly said about the idea of camouflage. “Art is never really about … what it’s about.” What is art trying to hide? The intersecting history of abstract art and camouflage in World War Two is underrated in the story of modern art. Kelly’s ludic monumental sculptures are an absurd commentary on Melbourne’s many war memorials.

John Kelly was born in London in 1965, and grew up, part of a large family in Melbourne’s outer industrial suburb of Sunshine. His parents still live in the suburb. His father, an Irishman from Cork, worked in the quarry; John remembers him always wearing overalls, like the man lifting the cow. I can see a family resemblance between John and the man that he is sculpting, even if it is modelled from a different person, the nose and chin are similar. Now John Kelly has returned to Sunshine to install his sculpture.

This is the third sculpture in Kelly’s Cow trilogy. ”Three Cows in a Pile,” was shown at the 2002 Monte Carlo Sculpture Festival ‘Parade des Animaux’. Cow Up A Tree in Docklands and Man lifting cow is now in Sunshine.