Street art is an international art movement; it is not limited to a few city centres like New York, Melbourne or São Paulo. It is popular through out SE Asia, from Brunei on the island of Borneo to the streets of Bangkok. “Capitalizing on the popularity of street art in Brunei the Alliance Françoise used the hotel (the Sheraton Utama Hotel) for a one-day show in which the French three-person graffiti collective SOAP created a public art work.” (Art Asia Pacific, Almanac 2009, p.151)

Slac with one of his pieces

All the writers, around in the world celebrate the personal expression and instant fame that street art brings. On a visit to Singapore I met up with Slac at the *scape park on Somerset Rd, just behind the busy, internationally famous, shopping centres of Orchard Road. Slac showed me around the *scape park area.

The *scape park is a skate board park and small youth arts centre with a two story aerosol piece on its front wall, along with more of Singapore’s ubiquitous gardens. 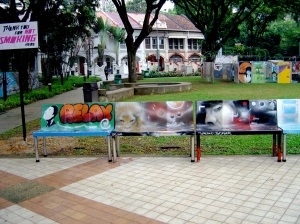 Slac, a 19 year old Malay Singaporean writer who has done legal and illegal aerosol art. Slac started off doing graffiti after playing too many computer games with graffiti themes. Now he is one the best street artists in SG. He has been asked to stop entering aerosol art competitions in Singapore and start to judge them.

Slac told me that the popular preference in Singapore is for images rather than calligraphy in street art. This is strange because calligraphy is valued in both Chinese and Islamic cultures. Slac did show me a piece with 3D wildstyle Arabic letters. 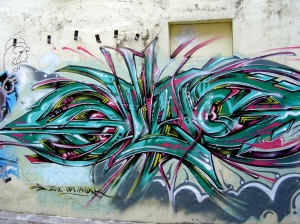 I had seen some of Slac’s work around Haji Lane earlier in the week. The old small shops with their covered sidewalks used to be common in Singapore still remain here. And Haji Lane has been rejuvenated into a trendy area with a bit of street art and shisha (or hookahs, Turkish tobacco pipes) bubbling along the footpath that leads along the front of these old buildings. Business and rents in the area have subsequently increased.

The area around Haji Lane is called the Arab Quarter because it was the last bit that the East India Company and Stamford Raffles hadn’t swindled the local Malay Sultan out of. There is a goth/cosplay shop, designer street-wear clothes by SUP, traditional cloth merchants, funky cafés and excellent Malay food in the area. The street artists are mostly Malay because the Chinese Singaporeans don’t want to sacrifice their work life.

Slac had to stop painting these two dogs because the police had come along and were asking questions. The owner of the building was away in Thailand so couldn’t be contacted. Slac wasn’t arrested this time – he just can’t continue working on the piece.