What ever happened to Troy Innocent? In the mid 1990s Troy Innocent’s computer art was the talk of the town, or at least amongst the people I was spending time with, Melbourne’s Clan Analogue and one of my housemates. His art was on the cover of World Art #12 magazine in 1997 and the article inside started by noting him as “one of the most acclaimed and internationally recognised artists working in his medium.”

I didn’t expect to find the answer at Brunswick Art Space but more on Troy Innocent later. I went to Brunswick Arts on Friday night to see the opening of two exhibitions; Melbourne Future and Metsä Pako that are both part of the Brunswick Music Festival. The converted factory space on Little Breeze street is now almost surrounded by new construction, except for the back of Alasya Restaurant.

Metsä Pako is an “immersive environment file with ambient, experimental sound”. It didn’t help that the neither pair of headphones were working and the ambient music from the two speakers could barely be heard. It wasn’t that immersive, just two video projectors and some clay leaves hanging from the ceiling.

It is hard to be that immersive when in the next room there is a virtual reality experience; Roger Essig’s North South East West that is far more spectacular especially as it was my first VR experience. Not that all of the art in Melbourne Future is all that great, some of it, like Essig’s virtual reality or Pierre Proske’s Voiceprint, voice activated custom software is still in a beta version. If the future was fully realised then it would present but the exhibits are fun and worth considering.

What is not a beta version but has been completely realised and looks and plays spectacularly is Benjamin Kolaitis and Troy Innocent’s interactive installation Play Parameters. The large sandbox on which the game is projected is surrounded by a wooden fence with wire stretched around it that the two players, in opposite corners tap on with metal bars. It is an amazing and fun creation… lights flash, the game is on… So this is what Troy Innocent is doing now, as well as, being the Senior Lecturer in Games and Interactivity in the Faculty of Life and Social Sciences at Swinburne University and represented by Hugo Michell Gallery in South Australia.

Melbourne Future is a reference to Melbourne Now at the NGV but it is not just a prediction about the future of art but also “borrowing from the successful format of the ‘Melbourne Now’ program we will be running a mix of exhibited works along with engaging the public with free talks and workshops.” (See their Facebook page for details on the talks and workshops, a must for all artists working with technology in Melbourne).

From Russia with Stamps

The video shows the image of Roger Moore strangling a blond woman with her bikini top projected onto the back and thighs of a lingerie clad woman. Jenna Corcoran created the video and is tells me about her marathon of watching Bond films to find these strange misogynistic images amongst the early films; thankfully diminished by the 1970s. “Goldmember,” Jenna says and then realizing her Freudian slip, “I keep saying that.” Easy to do the Bond films are one gigantic Freudian slip, the id projected onto a giant Cinemascope screen.

On Friday night Brunswick Art Space opened two group exhibitions: “Bond Song” and “Posted from Nowhere (Or, What Have You Done For Me Philately?)” advertised the Fringe Festival Guide. 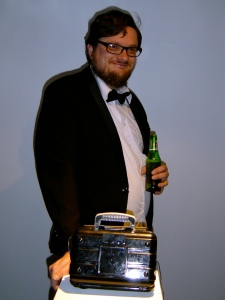 Dapper Ive Sorocuk, a committee member at Brunswick Art Space had art in both exhibitions and was dressed for the Bond theme. His video played with the iconic opening credits with the gun barrel viewpoint. Brunswick Art Space has several comix artists on its committee, an unusual artistic direction for Melbourne’s art run spaces.

(There is a sideshow or teaser for this exhibition in the window space at the Edinburgh Castle but that looks a bit weak with an awkward installation of a TV set and other bits.)

“Posted from Nowhere (Or, What Have You Done For Me Philately?)” is an exhibition of comix artist showing a series of stamps issued by the postal system from utopia/dystopia/parallel universes. Curated by comix artist, Jo Waite, the exhibition looks great. The tight theme for this exhibition is great as postage stamps are evidence of the collective consciousness, the official image of the country, some of the best of these retelling Australian history presenting alternative cultural icons. There is philatelic focused art by Neale Blanden, David Blumenstein, Bernard Caleo, Alex Clark, Maude Farrugia, Michael W. Hawkins, Greg Holfeld, Peter Jetnikoff, Mandy Ord, and Ive Sorocuk.