The underwater views of a lily pond are fantastic, new world’s waiting to be discovered like alien planets. They are Catherine Nelson’s Submerged at Gallery Smith in North Melbourne. 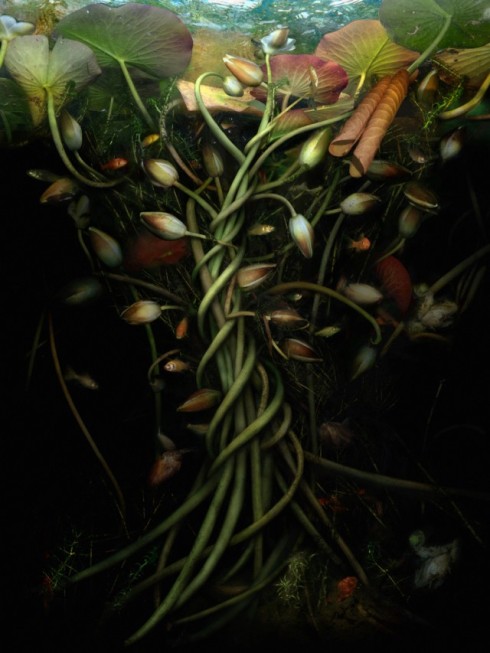 In the neo-baroque spirals of her underwater flower arrangements fish replace the insects and lizards that inhabit the baroque bouquets of Dutch still life paintings. The spectacle of dramatic point of view, often looking up to the surface of the water, exist to astonish the viewer.

Of course they aren’t real but then neither were the baroque paintings of flowers. Catherine Nelson’s artfully digitally manipulates photographs, assembled from cutting and pasting many photographs, the way that you might assemble a flower arrangement cutting and placing the flowers. Nelson has extensive experience working in visual effects photography for films including 300, Moulin Rouge and Harry Potter.

Time is compressed in Nelson’s underwater worlds: everything is budding, flowering and decaying simultaneously.

The baroque never died, its demise was contrived for the purposes of progress in art history. Now the baroque has returned with Nelson’s photographs and there are many examples of other Australian neo-baroque artists including Juan Davila, Vincent Fantauzzo, William Eicholtz, Bill Henson, eX de Medici, Sam Leech, and Sophia Hewson.

For more on the Neo-Baroque as an international trend read Angela Ndalianis Neo-Baroque Aesthetics and Contemporary Entertainment (MIT Press 2004) and Gregg Lambert The Return of the Baroque in Modern Culture (Continuum, 2004, London).

There are similarities between the 17th and 18th centuries and the contemporary times. Both are from a time without a clear direction that knew that massive worldwide change is inevitable and immanent. This gives the baroque sense of movement and transformation. And both the artists of the baroque and the contemporary did not have a word that defined their period; the word ‘baroque’ was only applied later by art historians. (I hope that later art historians will find a better word than ‘contemporary’.)

Gallery Smith is in an art deco brick building on a quiet street in North Melbourne with the main gallery spaces on the ground floor and a project space on the first floor. Louise Gresswell’s exhibition, Imprint in the project space is a series of loose, informal, abstract mixed-media paintings, not large enough to be impressive, not ugly enough to be interesting.