Benny Zable’s Greedozer costume, the full face gas-mask with the red radioactive sign on the end of the filter canister, was a regular feature at many demonstrations in the 1980s. He was a living sculpture with a message. 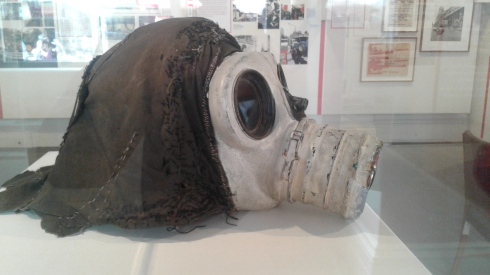 Zable’s gas-mask along with other the ephemera of mass protest demonstrations has been curated at the City Gallery in the Melbourne Town Hall in an exhibition curated by Malcolm McKinnon. The small exhibition traces the history of protests in Melbourne from 1962 Women’s Day marches through to recent anti-fascist protests. There is a “wreck the draft poster” from the Students for a Democratic Society printed on National Service Registration forms. And an improvised cardboard sign from the taxi driver protests that block Flinders Street in 2008. 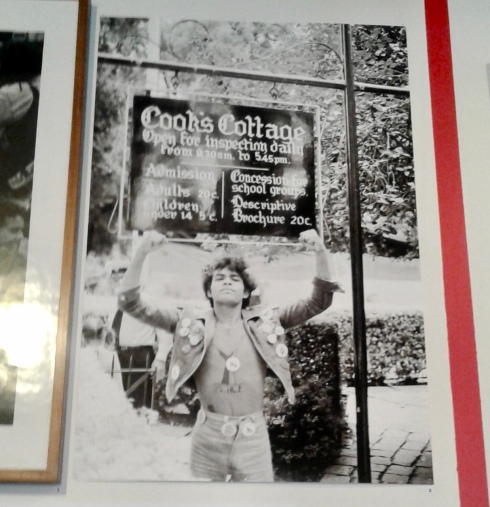 There is no denying the cultural importance of these events and images; protests are part of the spectacle of a democratic society. A photograph of a young Aboriginal protester from the 1976 in front of the Captain Cook Cottage still resonates with the current statue wars. Along with photographs and posters, there are protest signs in the exhibition but no banners; there wasn’t enough space in the small gallery and, maybe all the good old trade union banners are at the Potter Museum of Art’s exhibition State of the Union (I don’t know I haven’t seen it yet). The photographs of banners makes me wonder if protest marches are reconfigured religious processions, mass displays of passionate faith.

The exhibition attempts to give a balance between the government/police and other views. But can there ever be a balanced when the police using batons against peaceful protestors or driving over them with a police car at the S11 protests? The pretence that there is a tolerance of protests is one of the foundations of the illusion of a liberal democracy.

“Between the Street and the Sky” describes itself as a “provocation for Melbourne” rather than an exhibition about urban planning. It is at the City Gallery in Melbourne Town Hall. The elegant little display is certainly provocative in putting the gigantic growth of central Melbourne into perspective. More people are living in tall buildings with an ever smaller footprint. However, increases in population have not been met with an equivalent investment by either the city council or businesses. 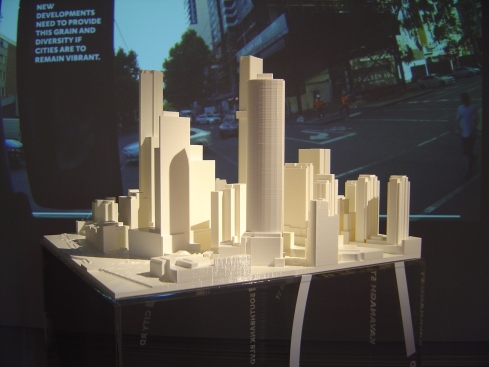 “Between the street and the sky”, model by Christopher White/Bates Smart

Planning is currently a hot topic in Melbourne, maybe in the rest of Australia too. This is because the quality of planning in Australia is catastrophic. Consider another example not covered in the “Between the Street and the Sky” exhibition. A major tourist attraction damaged for the benefit of a short term commercial interest. It could be  the impact of the Culture Kings shop on Hosier Lane, it could be the Apple store in Federation Square or Adani coal mine in Queensland potential to destroy the Great Barrier Reef. Take your pick they are all examples of Australia’s lack of planning. It is not just tourism that is threatened but the environment, to culture, to being able to live a good life.

Rather than focusing on one issue I want to know why Australians repeatedly makes these kind of decisions. I will not be blaming one political party for it because that is simply false and the people who do that are part of the problem, as they are trying to get a short term political advantage while damaging Australia in the long term through entrenched partisanship. I am happy acknowledge that this kind of decision making is not unique to Australia if the Australian demanding this will acknowledge that Australia is amongst the best in the world at doing irreparable damage to its own long term interests.

It is a problem of poor planning, avoiding planning and not planning. It is as if many people living in Australia never intended for Australia to be a permanent residence. Even if they never did, most of Australia’s population arrived planning to exploit the natural resources, become rich and return to their home country. This is especially true of the British colonial immigrants who became Australia’s ruling class. Australians often don’t want any other people in the area because this would additional people who will just reduce the amount that they can exploit. This paranoid and greedy reaction to the limited resources drives both Australia’s abuse of refugees and a local defence of the status quo in suburban infrastructure and planning.

Instead of avoiding the difficult issues Australia needs plans.