Both Keith Haring and Jean-Michel Basquiat were influenced by William Burroughs; their shared interest in semiotics and proximity in the NYC art scene made it almost inevitable that they would meet. Haring was a friend of Burroughs, the invite-Keith-around-to-dinner-kind of friend and collaborate on a couple of books, as opposed to a ‘Facebook friend’. So Burroughs influence on Haring is extensive from Haring’s distinctive hieroglyphic iconography to his, not well known, cut up collages and performance poetry.

‘Lick Fat Boys’ by Haring owes much to works, in film and audio, by Burroughs and Brion Gysin, e.g. “Recalling All Active Agents” In these works words are rearranged and reordered to create new meanings. Haring’s cut-up collages of text and images look very similar to Burroughs’s pages of cut-ups with collage elements.

“Keith Haring and Jean-Michel Basquiat – Crossing Lines” at the NGV documents this influence; including a list of people from Basquiat with Burroughs along with Prince, David Lynch and Godard (Burroughs is misspelt ‘Burrows’).

Although the exhibition documents Burroughs influence it then ignores it continuing to ignore it when it comes to interpreting the work. It describes the personal computer headed centipedes in Haring’s paintings as “caterpillars”. It is not a correct description for several reasons. Centipedes are used in many of Burroughs’s novels including Naked Lunch as a symbol of self-centred evil whereas caterpillars are not used as symbols of evil in anyone’s iconography. Centipedes are distinguished by having one set of legs for each segment of body, which is what is shown in Haring’s images even though they and all species of centipede don’t have a hundred legs. Finally, caterpillars don’t walk, they crawl, grasping on with their prolegs to pull their body forward until it arches; an iconic movement not depicted by Haring.

Haring and Basquiat had an influence on Australian art, especially its street art. The walls that Haring painted are still visible in Melbourne (see my blog post). His simple style of line drawn figures is not inimitable but few do. There is only a couple of Melbourne street artist openly and obviously influenced by Haring – Ero and Civil. Although the influence of Haring, in particular his dogs, on the iconography of clothing manufacturer Mambo has yet to be fully explored; the first appearance of the Mambo’s farting dog occurred in 1984 the same year that Haring visited Australia.

The influence of Basquiat’s visual style is even wider and more varied; from the work of street-artists from Anthony Lister to many contemporary/non-street artists.

How important is influence? Influence has so often been seen as a positive attribute however each iteration of this style weakens the effect, until it becomes bland and ordinary.

This is the second of a series of posts about the “Keith Haring and Jean-Michel Basquiat – Crossing Lines” at the NGV International. To read the first post. (Thanks to the NGV for the tickets to the exhibition and access to media photographs.)

In “Tangled Love” Civil’s stick figure folk, a mix between Keith Haring and Matisse, form a gentle community as they sit, walk, dance and ride bicycles. They occupy a large wall in the laneway outside the gallery, Tinning Street presents but sit comfortably on the smaller supports within. 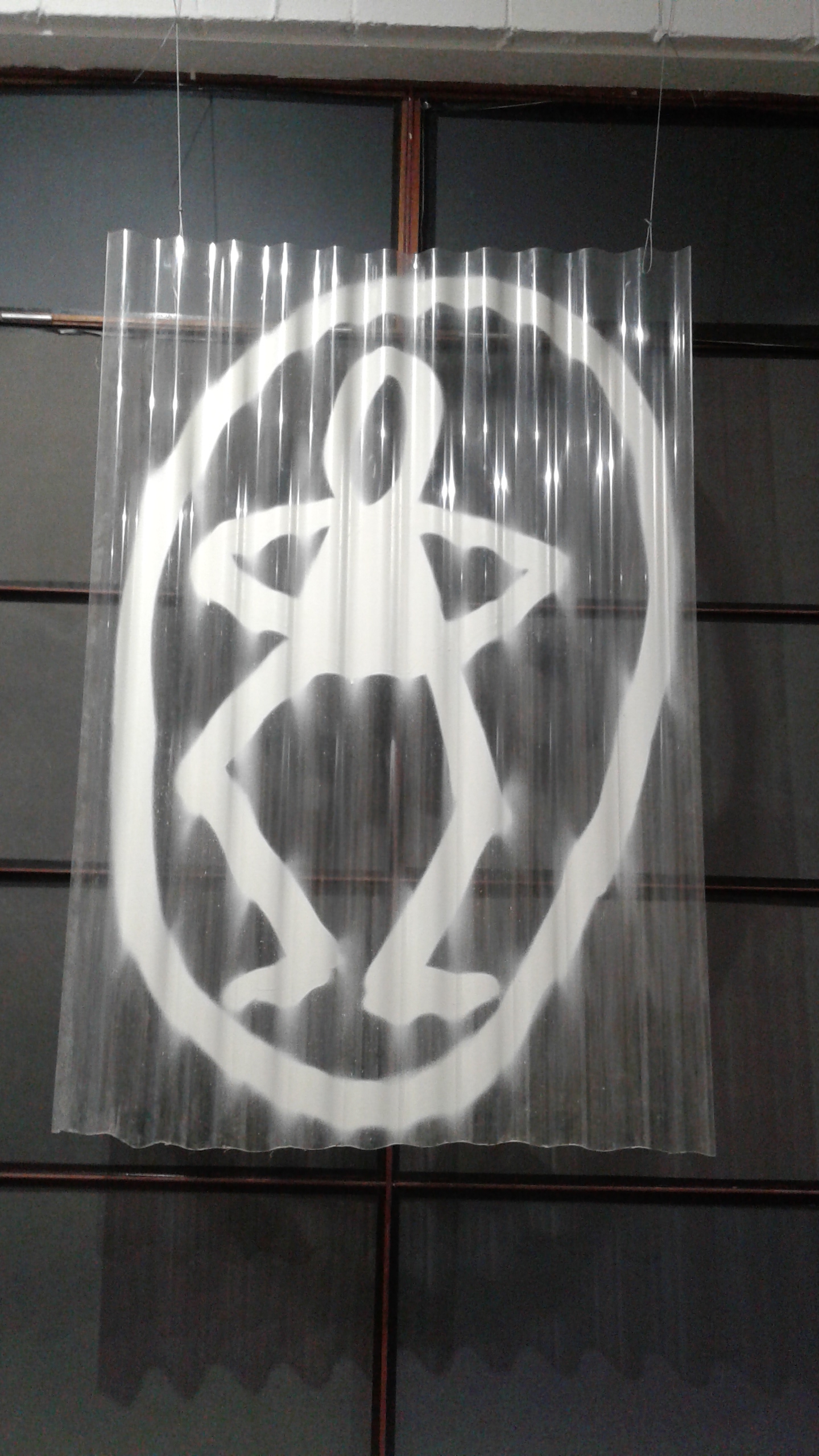 A decade ago I was interested in how street art and graffiti would be exhibited in art galleries. Moving from the street into the gallery is a matter of economics, conservation and, given the structure of the art world, inevitability. At the time stencil art dominated Melbourne’s street art scene so that meant that, aside from the gallery location, the other difference was support, outside walls or other materials.

However, sometimes that location on the street was very important to the art. I have seen many artists work fail to work in the gallery. The worst that I can remember was Urban Cake Lady’s exhibition at Rist; her art which looked enchanting on the street lost its magic inside the gallery.

Often this was because isolated in the gallery is different from being collaged onto the actual streetscape. Maybe they are missing the unexpected moment of discovery on the street, that Prof. Alison Young argues is the core of the street art experience, replaced with the totally expected experience of the exhibition. Sometimes the repetition of the artist’s single iconic image looks repetitious and boring in a gallery. Sometimes it is simply due to issues of scale. Certainly the white, anaesthetic room rarely helps the art look its best.

None of these appeared to be a problem in Tom Civil’s exhibition at Tinning Street presents. Dried botanical arrangements in old milk vats engraved by Civil decorate the gallery. His stick figures appear on a variety of supports: timbre lattice, ply, green corflute (corrugated plastic), doormats, wood and clear corrugated plastic which reminds the viewer of the variety of surfaces in the city. Aside from Civil’s familiar stick figures there are images created specifically for gallery exhibitions of animals from centipedes to chooks. Print making techniques extending from his early stencils on the street to linocut, drypoint etching, screen-prints and woodcuts. These printing techniques offer new material for the exhibition. Inside or outside of the gallery Civil’s images work.

The walls of Irene Warehouse 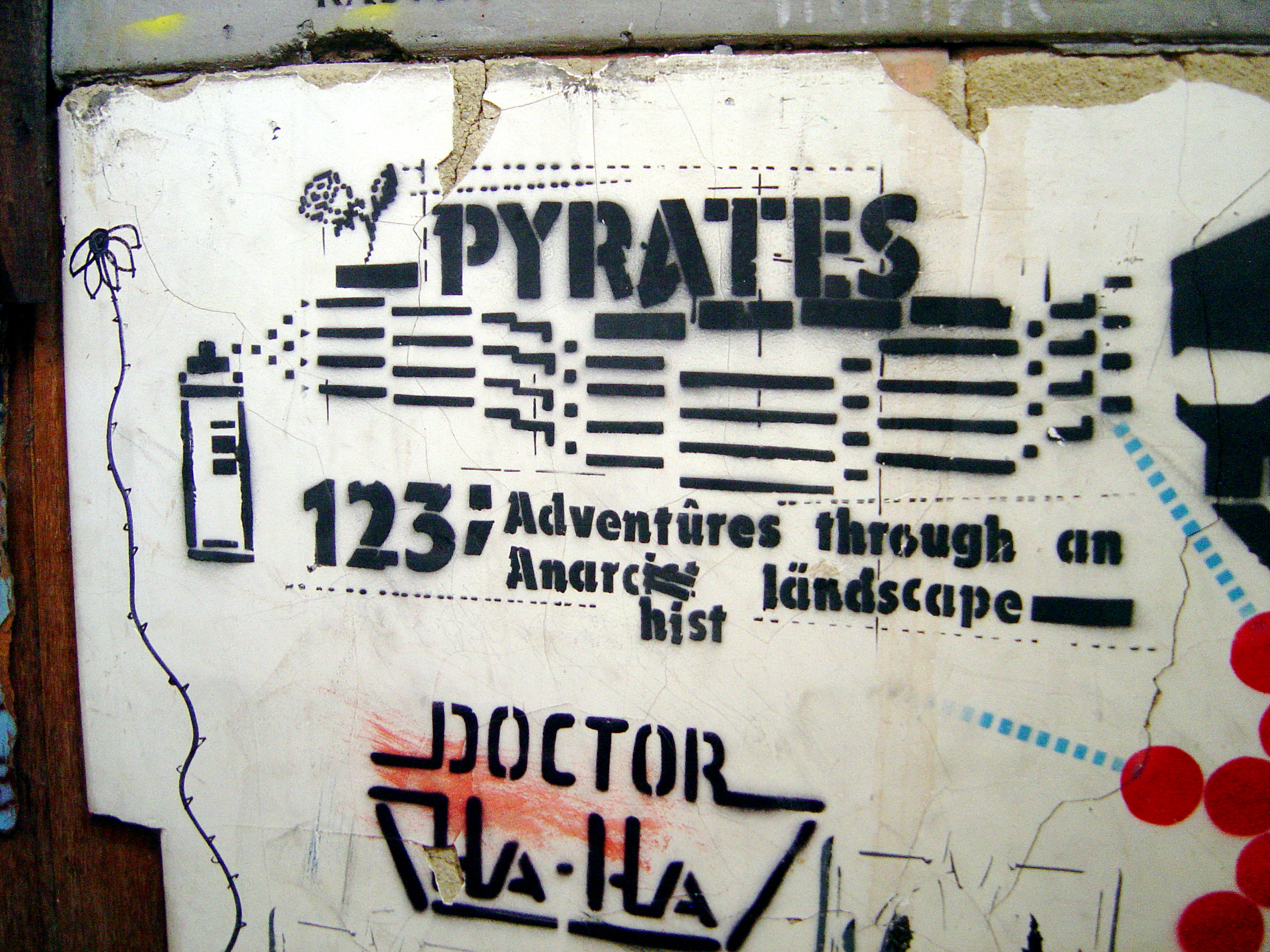 Irene Warehouse in Brunswick is a former two-storey lingerie factory that is now an artist-run, not-for profit, studio space and venue. It has been doing it for almost two decades and it is still going. It doesn’t say when it started on its website but I can remember going out there to meet with visiting members of the Indonesian art collective Taring Padi in 2002. 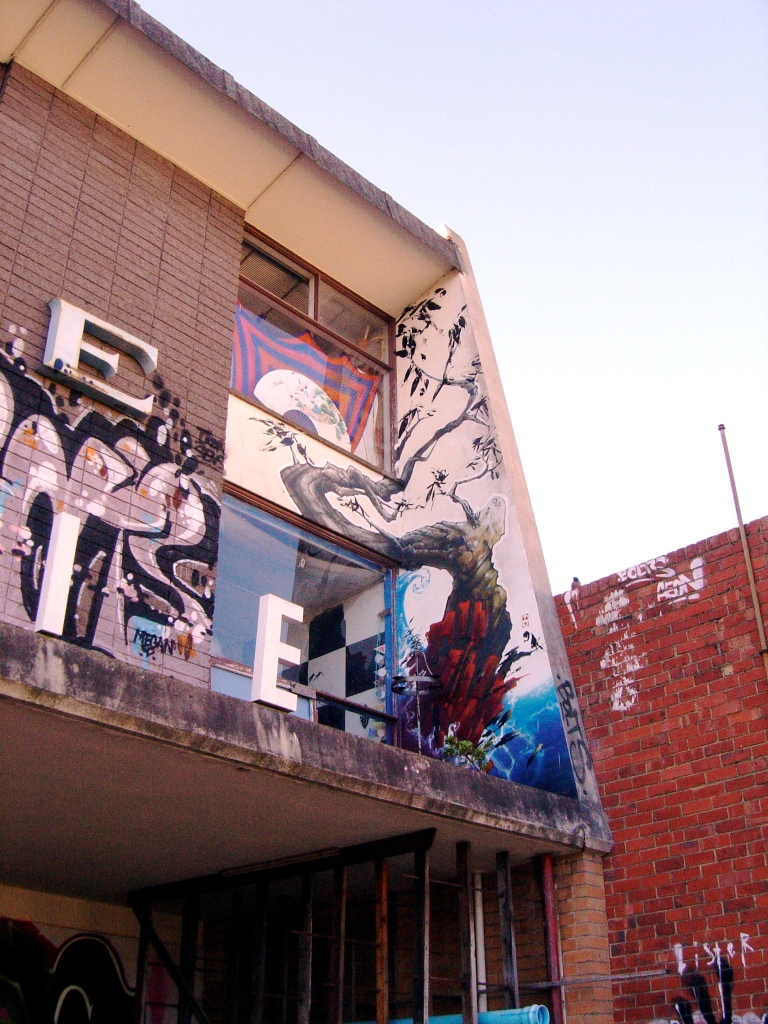 It was also at Irene Warehouse in the early years of the twenty-first century that several artists, like HaHa and Civil, who would be important to Melbourne’s stencil art street art movement, had their studios.

On its walls science fiction mixed with politics and Norman Guston rubbed shoulders with William Burroughs in the stencils by Civil, HaHa, Ben Howe, and even Stanley. Stanley did stencils before he teamed up with Bonz and became a notorious tagger.

Like the walls on the street the walls of Irene warehouse had their own anarchic discourse that ranged from the situationalist politics of Civil to the chem trail conspiracy theories of HaHa. 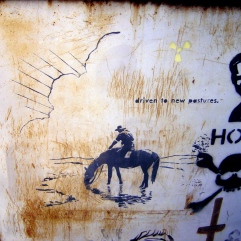 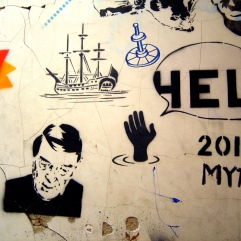 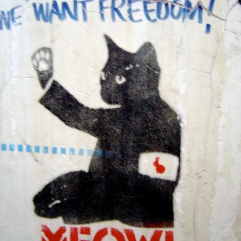 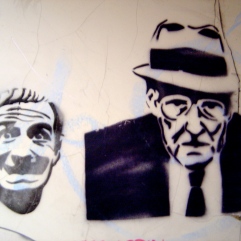 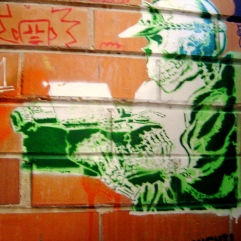 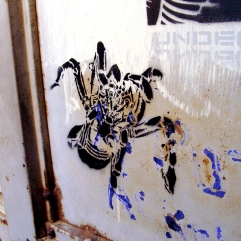 I’ve been photographing Melbourne’s stencils for almost a decade, I’ve been looking at them for longer. Looking back at all my photos of Melbourne stencils here is my top 10.

The Good, the Bad and the Average

Bicycling around boho Brunswick, I wanted to catch the last of the sun before the weather turns cold and I was looking for something to write about. I stopped off at Tinning Street Presents where there is a contemporary collage exhibition, “Splitting Image”. Maybe I should add a postscript to my review of the collage exhibition at the Counihan Gallerybut “Splitting Image” is just another average exhibition of collage. It is just not as exciting as the art just outside the gallery’s door in Ilhan Lane. 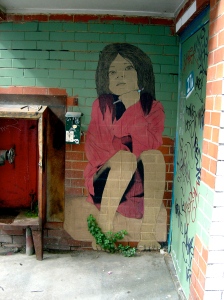 I & the others, Ilhan Lane, Brunswick 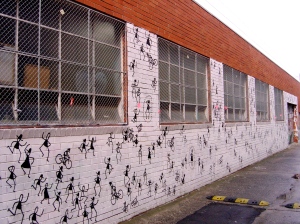 Ilhan Lane (running between Tinning Street and Albion Street, just east the Upfield train line) is one of the hidden gems of Melbourne’s street art. There is a mix of aerosol graffiti along with other kinds of other street art on the walls and fences of this lane. Now there is a huge Tom Civil mural in the lane and the surrealist game of the exquisite corpse (the parlour game of heads, bodies and legs) pasted up on the corrugated iron fence. Ilhan Lane is good place to see experiments in street art even if they don’t all work.

There was more work by Tom Civil on the front of Brunswick Bound; a large nocturne, quiet a different subject and style than his recent crowds. 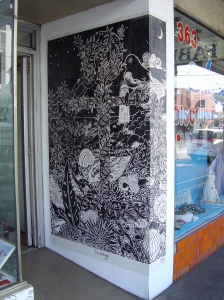 There is more art in the streets, lanes and bike paths of Brunswick. It is worth taking a look at the beautiful long walls of aerosol graffiti along the factory walls of Ovens Street. Plenty of new stuff happening; I see three different guys spray-painting along the bike path in the middle of day. Not all of it is good; the junk assemblages by “Scrap Princess” are just look boring and ugly – it makes you realize what quality work Junky Projects does.

Scrap Princess – with art failure is always an option

Riding along the Upfield bike path through Brunswick is a great way to view local street art.

Who decides what the future will look like is always a political issue. Will it big business, big government or a network of creative individuals on the street?

As part of the “Space Invaders” exhibition at RMIT gallery there was a street art seminar, moderated by Jaklyn Babington, Assistant Curator of International Prints, Drawings and Illustrated Books at the NGA (National Gallery of Australia). It was a panel discussion featuring Luke Sinclair from the Sticky Institute and artists: Nails, Civil and Jumbo.

The discussion looked both back at the exhibition and forward to the future of street art. And from this naturally lead onto the politics of the street and the politics of underground art. All of the speakers emphasised the importance of networking to the scene. Most importantly there is the power of networking through the internet but there is also the networks of collaborating street artists and the networks of zine distributions.

Some hardcore street artists and others might wonder at the inclusion of zines in the exhibition and Luke Sinclair from Sticky Institute on the panel. The NGA sees their collection of “street art as a paper based, alternative print making and drawing”, curator, Jaklyn Babington explained. And zines, like street art, are definitely an alternative tradition in print making and drawing. Zines are part of the same d.i.y. culture as street art. They are an urban sculptural object, a handmade art version of the common magazine that you pick up and hold in your hands.

The exhibition is a retrospective of look at the NGA’s street art collection and any examination of the history will naturally lead on to politics. Civil looked back at the exhibition as street art from the Howard-era when there were mass protests against the Iraq war and the World Economic Forum. Looking back Sydney artist, Jumbo spoke about how he began experimenting on the street beyond the formula of aerosol graffiti. Nails was interested in the legitimisation of street art through the communication between street and art gallery. And the concern expressed by some parts of street art community that something was being taken away through the legitimisation. Luke Sinclair also talked about the politics of underground work, the responses from both the mainstream and the underground to being exhibited or included in a zine book, as in the case of Fanzine, by Thames and Hudson. (For more information than anyone could want about this controversy see the website.)

Civil spoke about the politics of street art as the “broad conversation off different voices” on the streets, of “the handmade gesture in the city”, “markers” and “memorials” in the street. The title of the seminar, “Vandals or Vanguards?” contrasts the ‘vandals’, the way that street artists are portrayed in the mass media, or the ‘vanguard’, the leading front line position. Nails said that the vanguard is frustrated with how slow the mainstream responds, that he has become middle-aged waiting for it to catch up. But like the other speakers Nails is hopeful about the future of street art, comparing it to the punk scene “that died and then became even more interesting.”