Often public murals can look naff, too politically correct or otherwise too preaching they look like a school guidance councillor has designed them. Part of the grand socialist tradition of public murals promoted by the Mexican mural painters. Or simply decorative. But the comic book murals in Brussels escape these hazards because they are not propaganda for products nor ideas; they are just having fun with established comic book images. So the impact of these comic book murals is different from other public murals; there is no didactic function to them, they are simply fun.

Belgium invented the comic book, along with French fries, shopping malls, art nouveau and a lot of other things that have made the modern world. Belgians are particularly proud of their comic books as demonstrated by the city’s many comic book shops, it’s statues of comic book characters and public murals of enlarge comic book panels around Brussels inner city.

The justification for these murals on the basis of Belgium nationalism is thin; the population and visitors to Brussels enjoy the comic books. The Brussels Comic Strip Route was created by the comic strip museum by Michel Van Roye, Brussels Councillor for Urban Development and the Environment, in 1991.  It is an on going project and new murals are being added, form posts on a “comic strip route” around Brussels.

The murals are encountered as surprising, engaging and entertaining aspects of Brussels. One reason for the success of the murals is that the murals are not placed on urban eye-soars in an attempt to ameliorate their ugliness; rather they are placed on suitable walls around the city where they compliment the urban scene. Comic book images frequently depict the urban environment and comic book design works with the architecture of the city. Frequently the murals employ tromp l’oeil elements integrates the image with the building. 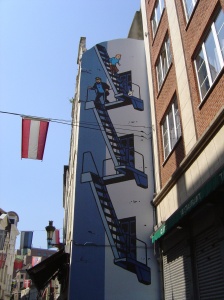 Public art tributes to Belgium comic books do not stop at these murals; there is a comic book museum, the Belgium Comic Strip Centre, in a fantastic art nouveau building designed by grand master of Art Nouveau, Victor Horta in 1906. There is also a very large sculpture of a duo of comic book characters making a colourful and light-hearted splash in the business district of Brussels.