Walking around Melbourne exploring its many lanes, sometimes in the company of a notable, some would say notorious, street artist who would prefer to remain anonymous and keep his comments off the record. Thanks for the company. What follows are my photos, my comments and my opinions. The selection of photos is not my pick of the best street art that I’ve recently seen but to the diversity, both geographic, technique and materials, of Melbourne’s street art. 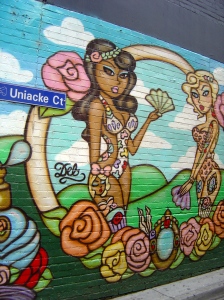 None of these photos are from the old locations, Hosier Lane, Centre Place, they are no longer the best place to see street art in the city. The locations for good street art have shifted in the eight years that I have been writing this blog, slowly moving north and west. In the west of the city where the street art is scare I found a whole lane, Uniacke Court, with several pieces by Deb and no-one else. 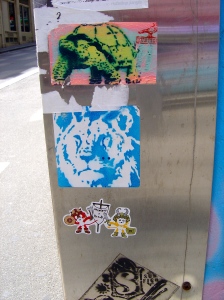 All over the city I keep on seeing more and more of the work of Sunfigo, simple and effective stickers and paste-ups but nothing to compare to Sunfigo’s Little Diver Tribute. 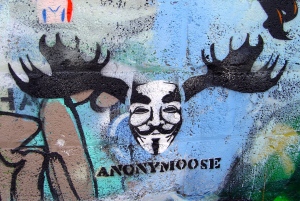 If you love stencils the best place to see them is Blender Alley. The reason is that the main door to Blender Studios, its roller doors were open when I was there, faces the alley and the artist’s in the studio, especially its director, Doyle, basically curate the alley. 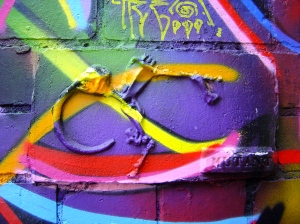 I keep seeing more street art sculpture and, not just Will Coles and Junky Projects, more people are doing it. Mutant and Discarded are doing similar work casting bones and other found objects. So far I have only seen Discarded’s work online but I know that it is out there. 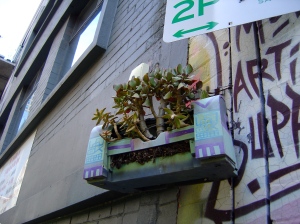 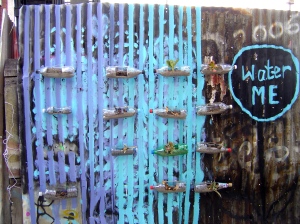 I’ve seen a few more artistic works of guerrilla gardening in the city and Ilham Lane in Brunswick. Also in Ilham Lane there is a piece of guerrilla geography, naming the small side bunch from Ilham Lane, Chook Lane. 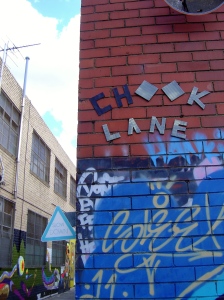 And there is still basic graffiti out there. 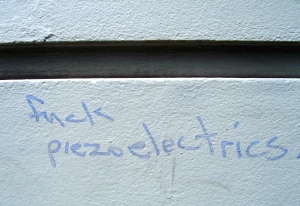 Yes, lots of young, beautiful, sexy girls with big round tits all over Melbourne. 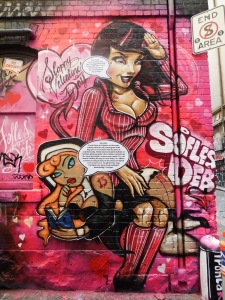 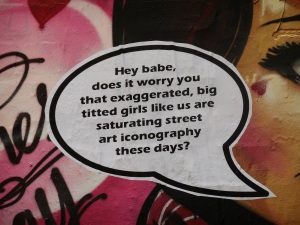 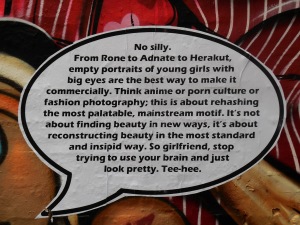 Kevin Anslow, who created the Melbourne Street Art 86 site, sent me these photographs of the paste up dialogue attached to Sofles and Deb’s new piece on Hosier Lane. (Thankyou Kevin.)

“Hey babe does it worry you that exaggerated, big titted girls like us are saturating street art iconography these days?” the speech balloon puts these words in the mouth of Sofles girl.

The speech balloon dialogue caps Sofles and Deb in the best possible way because it improves the work and opens up an interaction that wouldn’t be allowed in art galleries. The paste-ups are a wonderful piece of Situationalist provocation detouring and subverting the cartoon images. The dialogue is not puritanical; I enjoy porn and fashion photography but I wouldn’t want to look at them all day (I hate anime but this involves a reaction caused by an over-exposure to anime). Like me the dialogue is worried about “saturating” with over-exposure and not about the images themselves. It is calling for more progressive street art and attacking the conservatism of commercial art (the old school tattoo, comic book and fantasy art the influences street art). It is also a challenge to think about the issues of gender and commercial art.

Looking for the vocabulary to write about street art illustration work like Rone, Sofles and Deb, I turned to Japanese art and find bijinga (beautiful-girl picture). I was happy to find the word for there is little else to these bijinga pictures except for a beautiful girl. They are just, in the words of the speech balloon, “rehashing the most palatable mainstream motif” with different themes and in different styles. As art these bijinga pictures are simply eye candy and the artists who create them will enjoy ephemeral fame.

But what are the consequences of this abundance of images of wide-eyed buxom girls? Will people become bored with them and cause an opposite reaction in images?  Will girls follow their example?

P.S. Later the speech balloons were revealed to be the work of Melbourne street artist CDH, see his webpage for more about it.