I was seduced by the opening of Rising 5 – by the promise of an exclusive event and 3D fashion photography. I wasn’t sure what to look at: the clothes, the models, the 3D photographic effect or the other guests. It was like some strange kind of goth nightclub, with a DJ, hundreds of people, boys in black dresses, strangely dressed women and security at the front except that nobody was dancing. All this was for a little fashion photography exhibition in the Atrium at Federation Square. 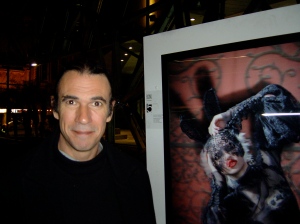 Even looking at the photographs I wasn’t sure what I was looking at: the fashion, the styling or the 3D effects. The 3D photography by Mark Ruff didn’t require special glasses to see, it was like the lenticular 3D effects of the old postcards with the image separating into distinct several layers. It was difficult to look at the photographs in the diminished light of the Federation Square Atrium; the partitions did not have spotlights illuminating the images and the 3D effect was going out of focus.

A passing photographer showed me a sharp image on his camera that he’d taken earlier of the 3D photographs and he recommended seeing the exhibition in daylight to enjoy the best of the 3D effect. There were two videos where the 3D effect could be seen but these were just compilations of the existing images and didn’t add anything new.

A passing make-up artist involved with the project (was it Shella Ruby?) told me that the models were all photographed in front of a blue screen and the backgrounds were added in digitally. She also told me that it was all for charity so it was important that I got the names right (Beyond Blue, but how I don’t know; nothing was for sale and I wasn’t asked for a donation).

Although Simone Ling and Izabel Calgiore’s art and styling emphasized the goth look; with backgrounds including Melbourne University’s carpark (that was used as a set in the original Mad Max film). The fashion of Lui Hon, Dhini, Richard Nylon Millinery, Nadia Napreychikov, Cami James and Alistar Trung ranged from 80s cocktail dresses to ball gowns that could have been designed by Alexander McQueen. Some of it, like Metal Couture jewellery is hardcore goth, all of it was over the top.

Not that it mattered on Friday night. Almost nobody was looking at the dozen photographs and two videos anyway – mostly they were air kisses, schmoozing and posing for photographs in front of them.

Rising 5 is part of the L’Oreal Melbourne Fashion Festival and I was a guest of Madam Virtue & Co.

There is a museum of textiles in Lyon, a museum of fashion in Brussels, in Antwerp there is a gallery of fashion with a very contemporary style, and in Bath another museum of fashion. In Melbourne the National Gallery of Victoria on St. Kilda Road and at Federation Square both have galleries devoted to fashion. They are not a large spaces considering Melbourne’s fashion industry but the NGV does strive to put on a varied program of exciting temporary exhibitions on fashion.

Melbourne also has many fashion and textiles students who regularly exhibit their work, generally at the end of the year exhibitions. I often see exhibitions by RMIT fashion and textiles students, especially at First Site gallery at RMIT. Fashion photography is another way in which fashion enters the art gallery and exhibitions of fashion photography are common – I must see one or two a year without searching them out.

Galleries in Melbourne often have exhibitions where art, jewellery and textiles meet, especially during Melbourne Fashion Festival and Melbourne Spring Fashion Week. Every year both fashion festivals have a program of associated events that takes fashion into the art galleries and exhibitions into fashion boutiques and other venues. There is often has several fashion photography or jewellery exhibitions along with other fashion associated art.

This year the programme of exhibitions associated with the Spring Fashion Week has included exhibitions at the NGV and State Library. There is an exhibition by The Age, “The Age of Fashion” in the square at the QV centre featuring fashion photographs from The Age’s archives and 5 mannequins displaying designer labels. It is an elaborate temporary exhibition made up of plinths, vitrines and platforms. On a different scale of exhibition and funding are the exhibitions: “Sue Barnes Studio” and “Black: an Exhibition”. “Sue Barnes Studio” is a small display of 8 photographs of fashion images, advertising and logos on the street at the Journal Bar viewing space, a vitrine near the café’s door. “Black: an exhibition” is contemporary all black jewellery by Vikki Kassioras and black ink drawings by Katherine Bowman. The temporary cardboard gallery space created for the exhibition in the Nicholas Building was elegant and functional. (See Melbourne Jeweler for a review of Black: an exhibition).

By Mark Holsworth and Catherine Voutier

The blockbuster exhibition of the Melbourne Fashion Festival was out of Melbourne at the Bendigo Art Gallery. There has been an average of 2 thousand visitors daily and a long wait in the queue to gain entry. The gallery’s staff and facilities couldn’t cope with the avalanche of people and Bendigo is experiencing a boom in tourists.

This was all for The Golden Age of Couture – Paris & London 1947-57 that featured dresses from Christian Dior and Cristobal Balenciaga. Other items included tiny travelling mannequins about 40cm tall that the French couturiers would bring over to England to display to clients. There were some fascinating British & French films from the period including one showing a model being dressed in the extensive underdress that the New Look form required (corseting, girdles, padded bras, extra padding attached to hips and shoulders). The films also revealed more men attending shows than would be the case today – the men at this time were the ones buying the clothes for their wives. There were also photographs by Cecil Beaton, Richard Avedon and Erwin Bloomfield. Bloomfield’s free Dadaist experiments in photography were not always successful but always adventurous and ambitious. Previously, fashion photographs were taken in studios. With the New Look, models were photographed in the real world showing the clothes as they would be worn in everyday situations.

The National Gallery of Victoria’s exhibition Remaking Fashion deconstructs the process of making fashion. And even in a modest way the way of exhibiting fashion had been deconstructed with the raw wood back frame. A series of Christian Dior toile versions of dress designs showed the structural basics and introduced the rest of the exhibition. This included Westwood’s experiments with traditions updating them to contemporary life, dresses and a slashed jacket by Rei Kawakubo of Comme des Garçons, and an impressive women’s dress remade from men’s garments by local fashion label SiX.

Fashion boutique Marais, located on the 1st floor of Royal Arcade, had a small exhibition of the work of designer Annie Valerie Hash. There were lots of beading and others quirky details. Some of Annie Valerie Hash’s dresses showed the distinct influence of Coco Channel. And on the 2nd floor of Royal Arcade, Don’t Come has cool street clothes and a one room gallery with Drella New York, photographs by Maripolarama. These are mosaics of enlarged snapshot-style photographs of the cool glamorous of NYC. Look there is Andy Warhol eating with Keith Haring, And there’s Madonna, Grace Jones, and hey, there’s Jeff Koons! But this isn’t couture anymore this is street d.i.y. fashion; the subject of our next entry on the 2009 Melbourne Fashion Festival Cultural Program.