Of cats, tourists and graffiti

Cats are a popular theme for Melbourne graffiti artists to agree on, especially when a Coburg cat boarding place gives permission to paint their wall, but cats are a popular theme. (I think the wall is by Slor and Danks, but forgive an old guy trying to read wildstyle.) Cats are a constant internet meme but it is also a graffiti meme, given all the cartoon cats: Felix, Tom, Scratchy… There was a huge wall in Collingwood full of cats in 2009 (also on the wall of a cat boarding place) and one in Prahran (not associated with cat boarding). 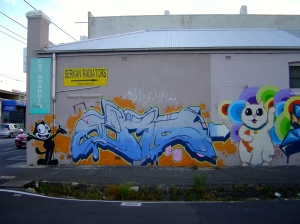 Coburg cats – Slor and a bit of Danks

I’m only posting this because found a few new reasons to wander the streets of Melbourne looking for some new graffiti in the past two months. My LA bro and his family were in Melbourne, so I had to show them Hosier Lane when I showed them around the city. They loved it, lots of selfies taken; my brother said that it was the first time that my niece had got her actual camera out for the whole trip (not counting the camera in her phone).

I’ve never seen Hosier Lane so crowded; there were three tour groups in the lane, plus a lot of other people. I wasn’t surprised at all the tourists in Hosier Lane but I was surprised to spot a group of well dressed people with cameras photographing pieces along the train line at Macauly Station. There are some great pieces but the area is so drek.

Footscray wall with another cat

I also had a couple of reason to go out to Footscray and there are a lot of good stuff around the train station and shopping strip. Yes, some skulls and more cats. On the subject of the popularity of cats in Melbourne’s graffiti world – there is Lush. 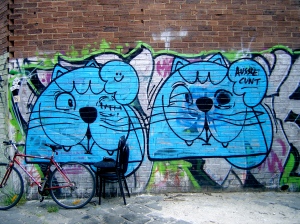