I have just got back to Melbourne after spending a few days Brisbane. Most of the commercial galleries in Brisbane are located in Fortitude Valley and most of the galleries in Fortitude Valley are located along Brunswick Street (Australia has such a repetitive way of naming streets). “The Valley”, as it is known in Brisvegas, is a mix of strip clubs, pubs, clubs, restaurants and cafés. There is a small pedestrian mall with al fresco dinning occupying most of the space. There is a lot of street art in the area, mostly stickers on the back of every street sign, generally by Loki One, Mizcry or ZKLR. 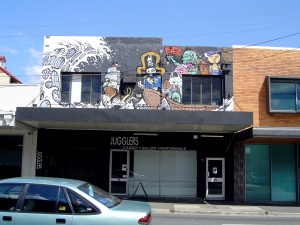 This was not the first time that I have been to the galleries in Fortitude Valley however this time when I visited many were closed. It must have been the wrong time of the month; they were hanging exhibitions in Gallery 2120 and Jugglers. A lot of decorative leather masks were being taken into Gallery 2120 so I probably didn’t want to see it anyway (there are a few other ceramic and glass galleries around but I wasn’t interested). I was interested in Jugglers, and disappointed that it wasn’t open, as I had seen two of their murals along the train line on my way to the Valley. Libby Edwards Gallery looked like it had been gutted for some major renovations. I don’t know why the Fort Arts Hub was closed, but again I was disappointed, it had some street influenced art in the window.

Jan Murphy Gallery and Philip Bacon Galleries were open; they are in the same building. Philip Bacon was showing an exhibition of Ray Crooke island scenes, bland South Pacific scenes with a flat thin paint, and their stock paintings including works by Donald Friend, Brett Whitely, and Roy DeMeister. Philip Bacon Galleries also had a selection of ordinary but expensive jewellery. Jan Murphy Gallery had an exhibition of David Band paintings. Band’s abstract forms and abstracted still life are cool but a bit formulaic and passé. The colours and shapes are attractive but unexciting.

Finally in Heiser Gallery I see something worth taking a second look.  Heiser Gallery a small commercial gallery further down Arthur St. from Philip Bacon Galleries. It was showing Inside Out, an exhibition of oil paintings of rooms by Kristin Headlam. These cool interior scenes are thinly painted, almost a sketch in oils. The atmosphere in these rooms that Headlam creates with confident brushstrokes is palpable. In some paintings the rooms are empty in others there are figures. There is even a history painting, “Handover” depicting the meeting in the Lodge between Mr and Mrs Rudd and Mr and Mrs Howard after the election.

The best of the exhibitions in Fortitude Valley that I saw were at IMA (Institute of Modern Art) – I will be writing a whole blog entry about the parochial use of term “modern art” in Brisbane. At IMA there was The Declaration of Resemblance and Fluid Insurgents by Jemima Wyman. Her intense photo-collages, video and fabric creations of patterned textiles, featured the ubiquitous plaid shirt. This pattern combined with black ski masks that are decorated with false eyes and toothy mouths, conjured images of a lost tribe of urban fringe dwellers.

Also at IMA was Taryn Simon’s photojournalism exhibition An American Index of the Hidden and Unfamiliar taken between 2002 and 2007 was a different look at America. There were some of the now familiar images of hidden America, the body farm in Tennessee, Klansmen and death row, but there were also some unfamiliar sights, the piles of stuff removed by quarantine at JFK airport.

The commercial art scene in Brisbane’s Fortitude Valley does not appear very strong and the decorative arts are the major part of that art market.