A foundry is needed to cast bronze sculpture. The industrial side of casting and erecting monuments should be considered on an equal importance to the sculptor. On the base of the Francis Ormond memorial there are words “cast by Robison Bros. Ltd.” on one side), and the sculptor’s name, Percival Ball on the other. 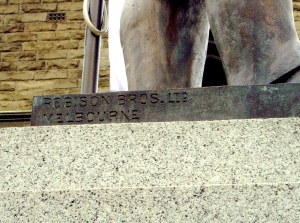 Robison Bros. had every reason to be proud of their work the statue as was the first full-scale figure cast in bronze in Melbourne. Prior to this all bronze statues had to be imported, although they might be assembled and finished locally, as in the case of Judge Redman Barry that was started by James Gilbert in England finished locally by Percival Ball.

Two Scottish brothers, James and Thomas Robison from Leith along with a third Scot, Henry Dodds, founded Robison Bros & Co. in 1854. They started as plumbers and coppersmiths but the firm soon expanded to became Melbourne’s most important engineering firm. Along with industrial manufacture and engineering the foundry workers at company were involved with casting the Burke and Wills Monument. Robison Bros & Co. finally closed in1973.

The first casting of a bronze statue in Melbourne did not mark the end of bronze sculptures for Melbourne being cast in Europe. Casting Australian sculptures in Europe continued well into the 20th Century, even with the time it took to ship the part back and forth between Australia and Europe – in some cases this added years to completing the sculpture. Over a decade in the case of memorial to Sir John Monash: in 1937 William Bowles won the competition to create a memorial and the bronze statue was cast in Italy prior to the outbreak of WWII but only finally completed and installed in 1950.

Bronze casting uses the lost wax technique, or more correctly lost-wax casting, for it is the wax that is lost and not a lost technique which is in continual use for centuries. Often for a life size or larger figure the clay model is divided into six or eight pieces and after casting the pieces are welded back together. At each stage in the process of casting and reassembling there is a degree of remodelling of the sculpture.

“Foundries can take anywhere from 15 to 60 per cent of sculptures budget, depending on how much casting is involved.” Louise Bellamy “Sculptors and a cast of thousands” (The Age 3/9/2005)